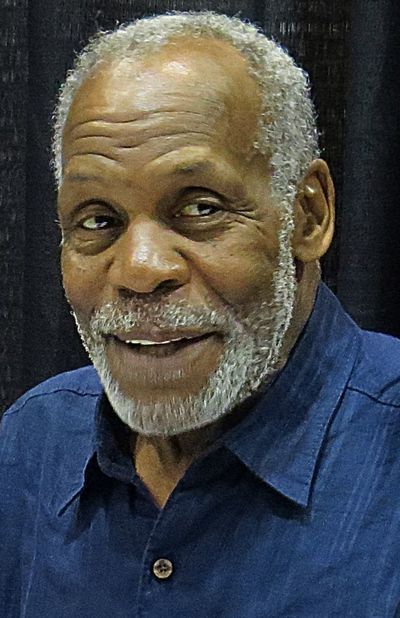 Glover was born in San Francisco, the son of Carrie (Hunley) and James Glover. His parents, postal workers, were active in the National Association for the Advancement of Colored People (NAACP), working to advance equal rights. Glover's mother, daughter of a midwife, was born in Louisville, Georgia and graduated from Paine College in Augusta, Georgia.

Glover attended George Washington High School in San Francisco. He attended San Francisco State University (SFSU) in the late 1960s but did not graduate. SFSU later awarded him an honorary degree. Glover trained at the Black Actors' Workshop of the American Conservatory Theater.

As an adolescent and a young adult, Glover suffered from epilepsy but has not suffered a seizure since age 35.

Glover originally worked in city administration working on community development before transitioning to theater. He has said:

“I didn't think it was a difficult transition. Acting is a platform that can become a conveyer for ideas. Art is a way of understanding, of confronting issues and confronting your own feelings—all within that realm of the capacity it represents. It may have been a leap of faith for me, given not only my learning disability (dyslexia) but also the fact that I felt awkward. I felt all the things that someone that's 6'3" or 6'4" feels and with my own diminished expectations of who I could be [and] would feel. Whether it's art, acting or theater that I've devoted myself to I put more passion and more energy into it.”

His first theater involvement was with Conservatory Theater, a regional training program in San Francisco. Glover also trained with Jean Shelton at the Shelton Actors Lab in San Francisco. In an interview on Inside the Actors Studio, Glover credited Jean Shelton for much of his development as an actor. Deciding that he wanted to be an actor, Glover resigned from his city administration job and soon began his career as a stage actor. Glover then moved to Los Angeles for more opportunities in acting, where he would later go on to co-found the Robey Theatre Company with actor Ben Guillory in honor of the actor and concert singer Paul Robeson in Los Angeles in 1994.

Glover has had a variety of film, stage, and television roles, and is best known for playing Los Angeles police Sergeant Roger Murtaugh in the Lethal Weapon series of action films, starring alongside Mel Gibson and Gary Busey. Later he once again starred with Busey in the blockbuster Predator 2. He also starred as the husband to Whoopi Goldberg's character Celie in the celebrated literary adaptation The Color Purple, and as Lieutenant James McFee in the film Witness. In 1994 he made his directorial debut with the Showtime channel short film Override.

Also in 1994, Glover and actor Ben Guillory formed the Robey Theatre Company in Los Angeles, focusing on theatre by and about Black people. During his career, he has made several cameos, appearing, for example, in the Michael Jackson video "Liberian Girl" of 1987. Glover earned top billing for the first time in Predator 2, the sequel to the sci-fi action film Predator. That same year he starred in Charles Burnett's To Sleep with Anger, for which he won the Independent Spirit Award for Best Male Lead.

In 2004, he appeared in the low-budget horror film Saw as Detective David Tapp. In 2005, Glover and Joslyn Barnes announced plans to make No FEAR, a movie about Dr. Marsha Coleman-Adebayo's experience. Coleman-Adebayo won a 2000 jury trial against the US Environmental Protection Agency (EPA). The jury found the EPA guilty of violating the civil rights of Coleman-Adebayo on the basis of race, sex, color and a hostile work environment, under the Civil Rights Act of 1964. Coleman-Adebayo was terminated shortly after she revealed the environmental and human disaster taking place in the Brits, South Africa, vanadium mines. Her experience inspired passage of the Notification and Federal Employee Anti-discrimination and Retaliation Act of 2002 (No-FEAR Act). As of 2013 the No Fear title has not appeared but The Marsha Coleman-Adebayo Story was announced as the next major project of No Fear Media Productions.

Glover portrayed David Keaton in the film The Exonerated - a real-life story of Keaton's experience of being arrested, jailed and then freed from death row.

In 2009, Glover performed in The People Speak a documentary feature film that uses dramatic and musical performances of the letters, diaries, and speeches of everyday Americans, based on historian Howard Zinn's "A People's History of the United States".

Glover played President Wilson, the President of the United States in 2012, a disaster film directed by Roland Emmerich and released in theaters November 13, 2009. In 2010, Glover participated in a Spanish film called I Want to Be a Soldier. In 2012, he starred in the film Donovan's Echo.

On September 2, 2009, Glover signed an open letter of objection to the inclusion of a series of films intended to showcase Tel Aviv at the Toronto International Film Festival.

On April 16, 2010, Glover was arrested in Maryland during a protest by SEIU workers for Sodexo's unfair and illegal treatment of workers. He was given a citation and later released. The Associated Press reports "Glover and others stepped past yellow police tape and were asked to step back three times at Sodexo headquarters. When they refused, Starks says officers arrested them."