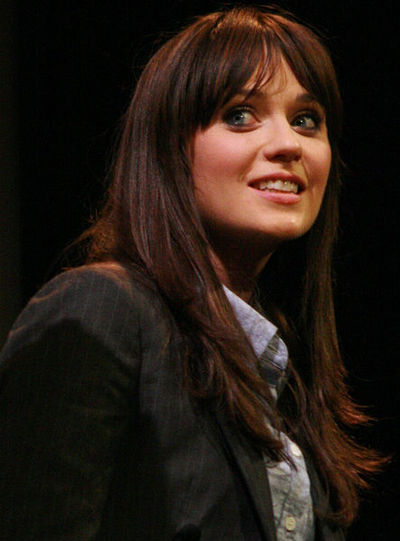 Zooey Claire Deschanel (born January 17, 1980) is an American actress, musician, and singer-songwriter. In 1999, Deschanel made her film debut in Mumford, followed by her breakout role as young protagonist William Miller's rebellious older sister Anita in Cameron Crowe's 2000 semi-autobiographical film Almost Famous. Deschanel soon became known for her deadpan and "Manic Pixie Dream Girl" supporting roles in films such as The Good Girl (2002), Elf (2003), The Hitchhiker's Guide to the Galaxy (2005), Failure to Launch (2006), Bridge to Terabithia (2007),The Happening (2008), Yes Man (2008), and (500) Days of Summer (2009). She has portrayed the role of Jessica Day on the Fox comedy series New Girl since 2011, for which she has received an Emmy Award nomination and three Golden Globe Award nominations.

For a few years starting in 2001, Deschanel performed in the jazz cabaret act If All the Stars Were Pretty Babies with fellow actress Samantha Shelton. Besides singing, she plays keyboards, percussion, banjo and ukulele. In 2006, Deschanel teamed up with M. Ward to release their debut album Volume One (recorded with M. Ward under the moniker She & Him) which was released in March 2008. Their follow-up album Volume Two was released in the U.S. in March 2010, with their Christmas album A Very She & Him Christmas being released in 2011 and Volume 3 in 2013. She also often sings in her films.

Zooey Deschanel was born in Los Angeles in 1980. She is the daughter of Academy Award–nominated cinematographer and director Caleb Deschanel and actress Mary Jo Deschanel. Her paternal grandfather was French, from Oullins, Rhône; her ancestry also includes Swiss, Dutch, English, Irish, and other French roots. She was raised as a Roman Catholic. She was named after Zooey Glass, the male protagonist of J. D. Salinger's 1961 novella Franny and Zooey. Her older sister, Emily Deschanel, is also an actress and stars in the TV series Bones.

Deschanel lived in Los Angeles, but spent much of her childhood traveling because her father shot films on location; she later said that she "hated all the traveling ... I'm really happy now that I had the experience, but at the time I was just so miserable to have to leave my friends in Los Angeles and go to places where they didn't have any food I liked or things I was used to." She attended Crossroads, a private preparatory school in Santa Monica, California, where she befriended future co-stars Jake Gyllenhaal and Kate Hudson. She sang throughout high school, planning to pursue a career in musical theatre and attending French Woods Festival of the Performing Arts. She attended Northwestern University for nine months before dropping out to work as an actress.

Deschanel appeared in a guest role on the television series Veronica's Closet before making her film debut in Lawrence Kasdan's 1999 comedy Mumford, and later in the year she appeared (non-singing) in the music video for The Offspring's single "She's Got Issues". In her second film, director Cameron Crowe's semi-autobiographical Almost Famous (2000), Deschanel played Anita Miller, the protagonist's rebellious older sister. The film received critical praise, but was not a box office success. She also appeared as Jimmy Fallon's girlfriend in the music video for his single, "Idiot Boyfriend".

Deschanel played supporting roles in a series of films that include Manic (2001), with Don Cheadle and Joseph Gordon-Levitt, Big Trouble (2002), with Tim Allen and Rene Russo, Abandon (2002) alongside Katie Holmes, Benjamin Bratt and Melanie Lynskey, and The Good Girl (2002) alongside Jennifer Aniston and Jake Gyllenhaal. In late 2002, The New York Times reported that Deschanel was "one of Hollywood's most sought-after young stars," and the Los Angeles Times wrote in early 2003 that Deschanel had become a recognizable type, due to "her deadpan, sardonic and scene-stealing [film] performances" as the protagonist's best friend. Deschanel objected to her typecasting, arguing, "A lot of these roles are just a formula idea of somebody's best friend, and it's like, I don't even have that many friends. In high school, I stayed home all the time, so I don't know how I'm everybody's best friend now."

In December 2008, Deschanel became engaged to musician Ben Gibbard, lead vocalist for Death Cab for Cutie and The Postal Service. They married on September 19, 2009, near Seattle, Washington. On November 1, 2011, they announced their separation. Deschanel subsequently filed for divorce on December 27, 2011, citing irreconcilable differences. The divorce was finalized on December 12, 2012.