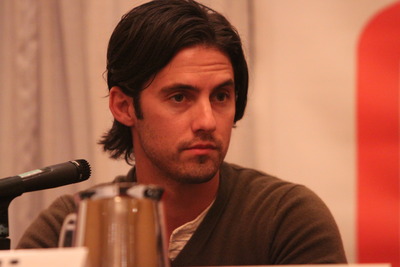 Milo Anthony Ventimiglia (born July 8, 1977) is an American actorbest known for his role as Peter Petrelli on the NBC television series Heroes. Ventimiglia's first career break was in the Fox series Opposite Sex, playing Jed Perry, the main protagonist of the show. Ventimiglia was first noticed by fans during his three year stint on the WB series Gilmore Girls, playing Rory Gilmore's love interest Jess Mariano from 2001 until his final guest appearance in 2006.

After his own WB series The Bedford Diaries, a recurring role as Meg Pryor's love interest on NBC's American Dreams, and playing Rocky Balboa's son in the sixth and final installment of the Rocky series, Rocky Balboa, Ventimiglia's big break came in 2006 when he received the part of nurse-turned-superhero Peter Petrelli for four seasons on NBC's Heroes. He currently stars as Ian Mitchell in the Crackle Original Series Chosen.

Ventimiglia was born in Anaheim, California, the son of Carol (née Wilson) and Peter Ventimiglia. His father is of Sicilian descent and his mother has English, Irish, Scottish, French, and Cherokee Native American ancestry. His last name, Ventimiglia, meaning "twenty miles", is the name of the town of Ventimiglia in Liguria, Italy, which later gave its name to another city, Ventimiglia di Sicilia. The youngest of three children, he has two older sisters, Leslie and Laurel. He explained in an interview with USA Today that his "crooked mouth" is a result of dead nerves on the left side, which cause that side to remain immobile, much like, incidentally, actor Sylvester Stallone, with whom he worked in Rocky Balboa.

Ventimiglia attended El Modena High School in Orange, California, where he wrestled, acted in drama productions and held the office of president in student government. He graduated in 1995. At eighteen years of age, Ventimiglia studied at the American Conservatory Theater for their summer program. He attended UCLA as a theatre major before getting a scholarship to a music school in San Francisco.

At 18 years of age, Ventimiglia started auditioning, booking jobs, and working his way up. His first starring role was as a gay teenager in Must Be the Music, a short film released as part of Strand Releasing's Boys Life 2. From there, Ventimiglia studied at UCLA before landing a role on The Fresh Prince of Bel Air. Ventimiglia has also guest starred on such television series as CSI: Crime Scene Investigation, Sabrina, the Teenage Witch, Law and Order: Special Victims Unit and Boston Public. He had the part of the main character, Jed Perry, in the short-lived FOX TV series,Opposite Sex.

In his biggest role to date, he starred as Peter Petrelli in the NBC program Heroes, a show about "ordinary" people discovering they have superpowers.  In 2008, he starred in the horror film Pathology. The movie co-starred Charmed actress Alyssa Milano and was directed by Marc Schoelermann for MGM.

Before being cast on Heroes, Ventimiglia had been living with close friends Steve Berra and Patrick Fugit. He dated his Gilmore Girls co-star Alexis Bledel from December 2002 to July 2006. He also dated his Heroes co-star Hayden Panettiere from December 2007 to February 2009.