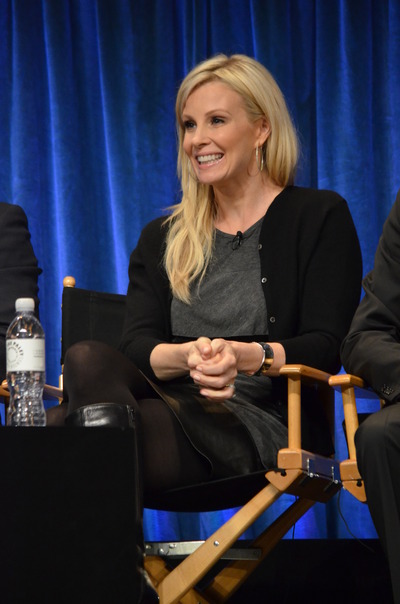 Potter, one of four daughters, was born on June 30, 1971 in Euclid, Ohio, to an Irish American Catholic family. Her father, Paul Brokaw, was the inventor of the first flame-resistant car wax, and her mother, Nancy, was a secretary. During her childhood, she was part of the St. Jerome Parish in Cleveland, and attended the local elementary school, as well as Villa Angela Catholic School for Girls, before graduating from Euclid High School. She also spent part of her early years in Arab, Alabama. Potter had wanted to be an actress since childhood.

She has appeared in several feature films, including Con Air (playing the wife of Nicolas Cage's character) and starring opposite Robin Williams in Patch Adams. In 1998, she played the love interest of doomed distance runner Steve Prefontaine in the movie Without Limits.

In 2001, she had two major roles, co-starring with Freddie Prinze Jr. in Head Over Heels, and in the thriller Along Came a Spider with Morgan Freeman, based on the James Patterson best-seller. She was a cast member of the television series Boston Legal but left during the second season. In 2004, Potter played the role Alison Gordon in the first Saw film. In 2009, Potter became a cast member of the new TNT series Trust Me which was cancelled after the first season due to low ratings. Potter currently plays the role of Kristina Braverman in NBC's comedy-drama Parenthood.

Potter was named "Best Movie Star Loyal to Cleveland" by ClevelandScene.com for her insistence on keeping her family in the Ohio city even after Hollywood success.

She married Daniel Christopher Allison, an orthopedic surgeon, on June 1, 2005. Potter and Allison had a daughter named Molly Brigid Allison, on August 3, 2005.