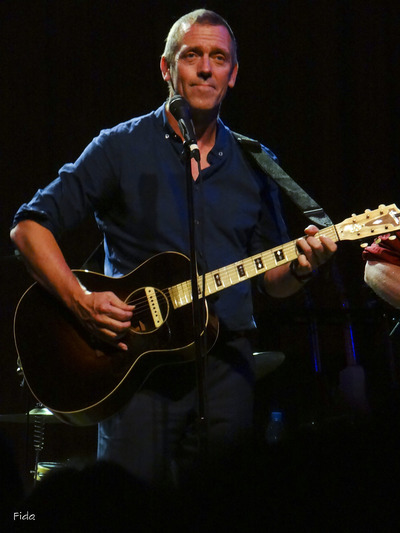 James Hugh Calum Laurie, OBE (born 11 June 1959), known as Hugh Laurie, is an English actor, comedian, writer, musician and director. He first became known as one half of the Fry and Laurie double act, along with his friend and comedy partner Stephen Fry, whom he joined in the cast of Blackadder and Jeeves and Wooster from 1987 to 1999.

From 2004 to 2012, he played Dr. Gregory House, the protagonist of House, for which he received two Golden Globe awards, two Screen Actors Guild awards, and six Emmy nominations. He was listed in the 2011 Guinness World Records as the most watched leading man on television and was one of the highest-paid actors in a television drama, earning £250,000 ($409,000) per episode in House.

Laurie was born in Oxford. The youngest of four children, Laurie has an older brother named Charles Alexander Lyon Mundell Laurie and two older sisters named Susan and Janet. He had a strained relationship with his mother, Patricia (née Laidlaw). He notes that his mother, "was Presbyterian by character, by mood" and that he was "a frustration to her... she didn't like me". His father, William George Ranald Mundell Laurie, was a doctor who also won an Olympic gold medal in the coxless pairs (rowing) at the 1948 London Games.

Laurie's parents, who were of Scottish descent, attended St. Columba's Presbyterian Church of England (now United Reformed Church) in Oxford. He notes that "belief in God didn't play a large role in my home, but a certain attitude to life and the living of it did." He followed this by stating, "pleasure was something that was treated with great suspicion, pleasure was something that... I was going to say it had to be earned but even the earning of it didn't really work. It was something to this day, I mean, I carry that with me. I find pleasure a difficult thing; I don't know what you do with it, I don't know where to put it." He has stated, "I don't believe in God, but I have this idea that if there were a God, or destiny of some kind looking down on us, that if he saw you taking anything for granted he'd take it away."

Laurie  was brought up in Oxford and attended the Dragon School from ages 7 to 13 and notes that he "was, in truth, a horrible child. Not much given to things of a bookey nature, I spent a large part of my youth smoking Number Six and cheating in French vocabulary tests."

Laurie went on to Eton, which he describes as "the most private of private schools." He attributes his attending Selwyn College, Cambridge, as "a result of family tradition" as his "father went to Cambridge and I applied to the same college." Laurie notes his father had a successful bout as an oarsman at Cambridge and that he was "trying to follow in his father's footsteps." He studied for a degree in Archaeology and Anthropology, specialising in Social anthropology.

Forced to abandon rowing during a bout of glandular fever (mononucleosis), Laurie joined the Cambridge Footlights, the university dramatic club that has produced many well-known actors and comedians. There he met Emma Thompson, with whom he had a romantic relationship; the two remain good friends. She introduced him to his future comedy partner, Stephen Fry. Laurie, Fry and Thompson later parodied themselves as the University Challenge representatives of "Footlights College, Oxbridge" in "Bambi", an episode of The Young Ones, with the series' co-writer Ben Elton completing their team.

In 1980–81, his final year at university, besides rowing, Laurie was also president of the Footlights, with Thompson as vice-president. They took their annual revue, The Cellar Tapes, to the Edinburgh Fringe Festival and won the first Perrier Comedy Award. The revue was written principally by Laurie and Fry, and the cast also included Thompson, Tony Slattery, Paul Shearer and Penny Dwyer. He states that he did not graduate from Cambridge.

The Perrier Award led to a West End transfer for The Cellar Tapes and a television version of the revue, broadcast in May 1982. It resulted in Laurie, Fry and Thompson being selected, along with Ben Elton, Robbie Coltrane and Siobhan Redmond to write and appear in a new sketch comedy show for Granada Television, Alfresco, which ran for two series.

Fry and Laurie went on to work together on various projects throughout the 1980s and 1990s. Among them were the Blackadder series, written by Ben Elton and Richard Curtis, starring Rowan Atkinson, with Laurie in various roles, but most notably Prince George and Lieutenant George.

Laurie married theatre administrator Jo Green in June 1989 in Camden, London. They live in Belsize Park, north London with sons Charlie and Bill and daughter Rebecca. They had planned to move the whole family to Los Angeles in 2008 due to the strain of being mostly separated for nine months each year, but ultimately decided against it. Charlie had a cameo in A Bit of Fry & Laurie in the last sketch of the episode entitled Special Squad, as baby William (whom Stephen and Hugh begin to "interrogate" about "what he's done with the stuff", calling him a scumbag and telling him that he's been a very naughty boy) during his infancy, while Rebecca had a role in the film Wit as five-year-old Vivian Bearing.

Laurie's best friend is long-time comedy partner Stephen Fry, who was best man at his wedding and is godfather to his children. 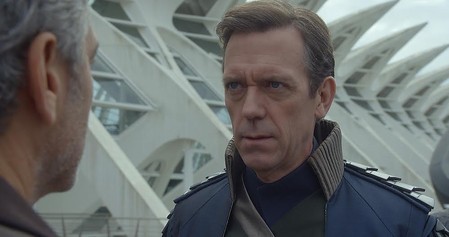 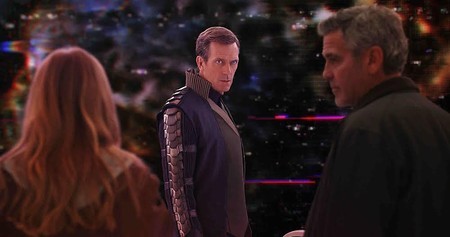