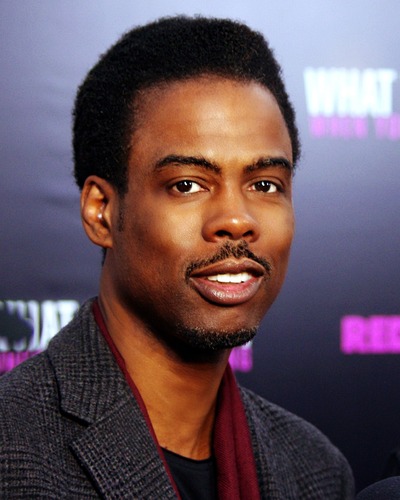 After working as a standup comic and appearing in small film roles, Rock came to wider prominence as a cast member of Saturday Night Live in the early 1990s. He went on to more prominent film roles, and a series of acclaimed comedy specials for HBO.

Rock was born in Andrews, South Carolina. Shortly after his birth, his parents moved to Crown Heights, Brooklyn, New York. A few years later, they relocated and settled in the working-class area of Bedford-Stuyvesant, Brooklyn. His mother, Rosalie (née Tingman), was a teacher and social worker for the mentally handicapped; his father, Julius Rock, was a former truck driver and newspaper deliveryman. Julius died in 1988 after ulcer surgery. Chris's younger brothers Tony, Kenny and Jordan are also in the entertainment business. His older half-brother, Charles, died in 2006 after a long struggle with alcoholism. Rock has said that he was influenced by the performing style of his paternal grandfather, Allen Rock, a preacher.

Rock was bussed to schools in predominately white neighborhoods of Brooklyn, where he endured bullying and beatings from white students. As he got older, the bullying became worse and Rock’s parents pulled him out of James Madison High School. He decided to drop out of high school altogether and later received a GED. Rock worked menial jobs at various fast-food restaurants.

Rock began doing stand-up comedy in 1984 in New York City’s Catch a Rising Star. He slowly rose up the ranks of the comedy circuit in addition to earning bit roles in the film I’m Gonna Git You Sucka and the TV series Miami Vice. Upon seeing his act at a nightclub, Eddie Murphy befriended and mentored the aspiring comic. Murphy gave Rock his first film role in Beverly Hills Cop II.

Rock has been married to Malaak Compton-Rock since November 23, 1996. She is the founder and executive director of StyleWorks, a non-profit, full-service salon that provides free services for women leaving welfare and entering the workforce. They have two daughters together, Lola Simone (born 2002) and Zahra Savannah (born 2004).