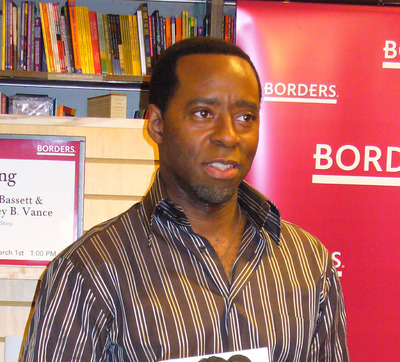 Courtney Bernard Vance (born March 12, 1960) is an American actor. He is notable for his roles in the feature film The Hunt for Red October and the television series Law & Order: Criminal Intent, in which he played Assistant District Attorney Ron Carver. He guest starred on the TNT series The Closer as Chief Tommy Delk, from 2010–2011. In 2013 won a Tony Award for Best Featured Actor in a Play for his role in Lucky Guy.

Vance was born in Detroit, Michigan, on March 12, 1960, the son of Leslie, a librarian, and Conroy Vance, a grocery store manager and benefits administrator. He attended Detroit Country Day School, a fee-paying university-preparatory school, and later graduated from Harvard University with a bachelor of arts degree. While attending Harvard, Vance was already working as an actor at the Boston Shakespeare Company. He earned a Master of Fine Arts degree later at Yale School of Drama where he met future wife and fellow student Angela Bassett.

His early feature film credits include Hamburger Hill, The Hunt for Red October, The Last Supper, Dangerous Minds, and The Adventures of Huck Finn.

Vance is married to Angela Bassett, whom he first met in 1980. Together, they have twins son Slater Josiah Vance and daughter Bronwyn Golden Vance, born on January 27, 2006. He and Bassett have authored a book, Friends: A Love Story. The two also participate in the annual Christmas celebration, Candlelight Processional, at Epcot.