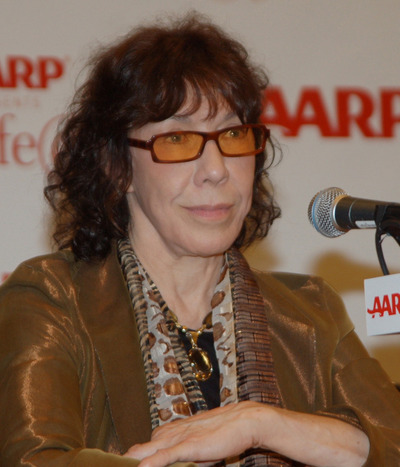 Mary Jean "Lily" Tomlin (born September 1, 1939) is an American actress, comedian, writer, and producer. Tomlin has been a major force in American comedy since the late 1960s when she began a career as a stand up comedian and became a featured performer on television's Laugh-in. Her career has spanned television, comedy recordings, Broadway, and motion pictures, enjoying acclaimed success in each medium. She has starred in such films as Nashville, Nine to Five, All of Me, The Beverly Hillbillies, Orange County, and I Heart Huckabees. Her notable television roles include Rowan and Martin's Laugh-In as a cast member from 1970–73, Ms. Frizzle on The Magic School Bus, Kay Carter-Shepley on Murphy Brown, and Deborah Fiderer on The West Wing. She currently stars as Lillie Mae on the ABC sitcom Malibu Country.

Tomlin was born in Detroit, Michigan, the daughter of Lillie Mae (née Ford), a housewife and nurse's aide, and Guy Tomlin, a factory worker. Tomlin's parents were Southern Baptists who moved to Detroit from Paducah, Kentucky, during the Great Depression. She is a 1957 graduate of Cass Technical High School. Tomlin attended Wayne State University, where her interest in the theater and performing arts began. After college, Tomlin began doing stand-up comedy in nightclubs in Detroit and later in New York City. Her first television appearance was on The Merv Griffin Show in 1965.

In 1969, after a stint as a hostess on the ABC Television series Music Scene, Tomlin joined NBC's sketch comedy show Rowan and Martin's Laugh-In. Tomlin was an instant success on the already established program, in which in addition to appearing in general sketches and delivering comic gags, she began appearing as regular characters she created that quickly became famous and went on to lives outside of the show in later recordings and television specials.

Tomlin was also one of the first female comedians to break out in male drag with her characters Tommy Velour and Rick. In 1982, she premiered Pervis Hawkins, a black rhythm-and-blues soul singer (patterned after Luther Vandross), with a mustache, beard and close-cropped afro hairstyle, dressed in a three-piece suit. Tomlin used very little, if any, skin-darkening cosmetics as part of the character, instead depending on stage lighting to create the effect.

Tomlin made her dramatic debut in Robert Altman's Nashville, for which she was nominated for an Academy Award for Best Supporting Actress; she played Linnea Reese, a straitlaced, gospel-singing mother of two deaf children who has an affair with a womanizing country singer (played by Keith Carradine). The Oscar that year went to Lee Grant for her role in Shampoo. A comedy-mystery, The Late Show, teaming Tomlin with Art Carney, was a critical success in 1977. One of the few widely panned projects of Tomlin's career, however, was 1978's Moment by Moment, directed and written by Wagner, which teamed Tomlin in a cross-generational older woman/younger man romance with John Travolta.

Tomlin soon had the greatest hit of her film career with 1980's Nine to Five in which she played a secretary named Violet Newstead who joins coworkers Jane Fonda and Dolly Parton in seeking revenge on their monstrous boss, Franklin M. Hart, Jr., played by Dabney Coleman. The film was a huge success and one of the year's top grossing films.

Tomlin met her partner Jane Wagner in March 1971. After watching an after school special written by Wagner, Tomlin invited her to Los Angeles to collaborate on a comedy album. Although Tomlin officially came out to the press in 2001, her sexual orientation had not really been a secret. In interviews she would often refer to Jane Wagner as her partner. As Tomlin herself stated in 2008, in an interview for Just Out magazine, "Everybody in the industry was certainly aware of my sexuality and of Jane...in interviews I always reference Jane and talk about Jane, but they don't always write about it."