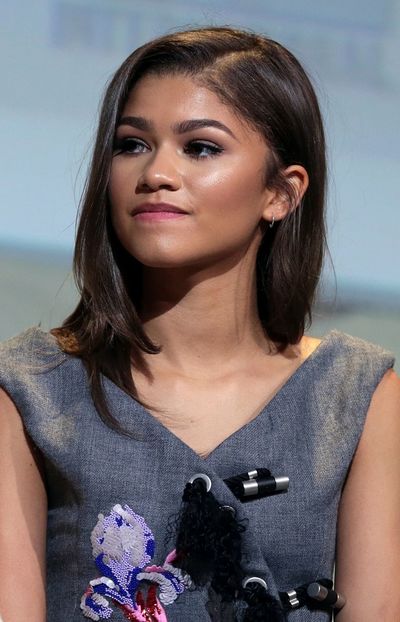 Zendaya Maree Stoermer Coleman (born September 1, 1996), known mononymously as Zendaya (/zɛnˈdeɪ.ə/), is an American actress, singer, and dancer. From 2010 to 2013, she starred in the Disney Channel sitcom Shake It Up as Rocky Blue. She has starred in two films and played one of the lead roles in the film Frenemies as Halley Brandon. She voiced Fern in the Pixie Hollow Games. She appeared in Good Luck Charlie as Rocky Blue and in a Good Luck Charlie and Shake It Up crossover title Charlie Shakes It Up. She appeared on PrankStars as herself in the episode "Walk The Prank" and on A.N.T. Farm as Sequoia Jones in the episode "Creative ConsultANT."

Zendaya signed a deal with Hollywood Records on August 8, 2012, and started recording songs for her debut album on August 12, 2012. She released a single from an independent label called "Swag It Out" and another single with Bella Thorne called "Watch Me," which is featured on the Break It Down album. On March 20, 2012, Zendaya released the song "Something to Dance For" as promotional single from Shake It Up: Live 2 Dance soundtrack.

Zendaya was born in Oakland, California, the daughter of Claire Marie (Stoermer) and Kazembe Ajamu (born Samuel David Coleman). Her father is African-American, with Arkansan roots; her mother is white, with German and Scottish ancestry.

Zendaya began her professional career working as a fashion model for Macy's, Mervyns and Old Navy. She was featured in an iCarly toys ad. She also appeared as a back-up dancer in a Sears commercial. In 2009, she was a featured performer in the Kidz Bop music video for its cover of the song "Hot n Cold", which was released on Kidz Bop 15. She auditioned in November 2009 for the role of CeCe Jones to join the cast of Dance Dance Chicago (later changed to Shake It Up!). For her audition, she performed Michael Jackson's "Leave Me Alone". In 2011 Zendaya released "Swag It Out", a promotional independent single. The song was composed by Bobby Brackins and produced by Glenn A. Foster. She also starred in the book trailer for "From Bad To Cursed" by Katie Alender. In the same year, she released "Watch Me," featuring Bella Thorne, on June 21. The song peaked at 86 on the Billboard Hot 100. The second season of Shake It Up was announced on March 16, 2011, and premiered on September 18, 2011. On June 5, 2011, Shake It Up had a crossover episode with Good Luck Charlie. Zendaya hosted Make Your Mark: Ultimate Dance Off 2011.

Her first movie role was in the 2012 film, Frenemies, a Disney Channel Original Movie. On February 29, 2012, "Something to Dance For" was released as promotional single for Live 2 Dance. For the soundtrack, Zendaya also recorded three other songs: "Made In Japan," "Same Heart", and "Fashion In Krytonite", released as promotional single. On September 2, 2012, she signed to Hollywood Records. In October, Zendaya performed at the Teen Music Festival and at the Operation Smile benefit. In February 2013, Zendaya was announced as one of the celebrities who will compete on season 16 of Dancing with the Stars. At age 16, she was the youngest contestant ever to participate on the show, before Willow Shields succeeded her at age 14 on season 20. She was partnered up with professional dancer Valentin Chmerkovskiy. In May, the couple finished as runner-ups behind Kellie Pickler and Derek Hough. Her self-titled debut album was released on September 17, 2013. It was preceded by the single "Replay", released on July 16, 2013. The song was written by Tiffany Fred and Paul "Phamous" Shelton. In June 2013, Coleman wrapped up filming for the music video. On July 25, the Disney Channel confirmed that Shake It Up will be canceled after the end of the third season.

In November 2013, Zendaya was picked as Elvis Duran's Artist of the Month and was featured on NBC's Today show hosted by Kathy Lee Gifford and Hoda Kotb, where she performed live her self-titled single "Zendaya".

In 2014, Zendaya was cast as 16-year-old Zoey Stevens, the lead character in the Disney Channel Original Movie Zapped, whose "smart phone begins to somehow control all the boys around her". In late 2013, Zendaya was cast as the lead in a new Disney Channel pilot called Super Awesome Katy. It was ordered to series by Disney Channel in May 2014, with the series now under the title K.C. Undercover, and with Zendaya's character now named K.C. Cooper rather than Katy Cooper. In 2017, Zendaya stated that she had a large influence over the renaming of her character and the retitling of the series, also deciding several key elements of the character's personality. K.C. Undercover premiered on Disney Channel on January 18, 2015, and was renewed for a second season in May 2015. In March 2016 Zendaya was cast in the upcoming film Spider-Man: Homecoming, playing a character named Michelle; the film is scheduled to be released in July 2017.

Zendaya spent three years of dancing in a dance group called Future Shock Oakland. The group did hip hop and hula dances when she was eight. Her interests include singing, dancing, and designing clothes.

Zendaya plays the role of MJ in Spider-Man: No Way Home.