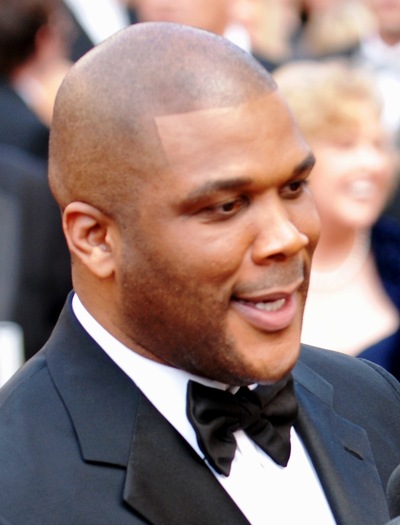 Tyler Perry (born Emmitt Perry, Jr.; September 13, 1969) is an American actor, director, screenwriter, playwright, producer, author, and songwriter, specializing in the gospel genre. Perry wrote and produced many stage plays during the 1990s and early 2000s. In 2011, Forbes named him the highest paid man in entertainment; he earned $130 million between May 2010 and 2011.

Perry has also created several television shows, his most successful of which is Tyler Perry's House of Payne, a show that ran for 8 seasons on TBS from June 21, 2006, to August 10, 2012. On October 2, 2012, Perry struck an exclusive multi-year partnership with Oprah Winfrey and her Oprah Winfrey network. The partnership was largely for the purposes of bringing scripted television to the OWN network, Perry having had previous success in this department. Two of Perry's television series for the network, The Haves and the Have Nots and Love Thy Neighbor, premiered on May 28, 2013, and May 29, respectively. Both programs broke records for the network, supplying OWN with its highest ratings ever for series premieres.

Perry currently has an upcoming Madea film in the works: A Madea Christmas (conventional onsite film based on the play), slated for release on December 13, 2013. In addition, Perry has announced that he's working on a Madea animated film for kids.

Perry was born in New Orleans, Louisiana, as Emmitt Perry, Jr., the son of Willie Maxine Perry (née Campbell) and Emmitt Perry, Sr., a carpenter. He has three siblings. Perry once said his father's "answer to everything was to beat it out of you". As a child, Perry once went so far as to attempt suicide in an effort to escape his father's beatings. In contrast to his father, his mother took him to church each week, where he sensed a certain refuge and contentment. At age 16, he had his first name legally changed from Emmitt to Tyler in an effort to distance himself from his father.

Many years later, after seeing the film Precious, he was moved to relate for the first time accounts of being molested by a friend's mother at age 10; he was also molested by three men prior to this, and later learned his own father had molested his friend.

While Perry did not complete high school, he earned a GED. In his early 20s, watching an episode of The Oprah Winfrey Show, he heard someone describe the sometimes therapeutic effect the act of writing can have, enabling the author to work out his or her own problems. This comment inspired him to apply himself to a career in writing. He soon started writing a series of letters to himself, which became the basis for the musical, I Know I've Been Changed.

Around 1990, Perry moved to Atlanta, where two years later "I Know I've Been Changed" was first performed at a community theater, financed by the 22-year-old Perry's $12,000 life savings. The play included Christian themes of forgiveness, dignity, and self-worth, while addressing issues such as child abuse and dysfunctional families. The musical initially received a "less than stellar" reception and was a financial failure. Perry persisted, and over the next six years he rewrote the musical repeatedly, though lackluster reviews continued. In 1998, at age 28, he succeeded in retooling the play and restaging it in Atlanta, first at the House of Blues, then at the Fox Theatre. Perry continued to create new stage productions, touring with them on the so-called "chitlin' circuit" (now also known as the "urban theater circuit")  and developing a large, devoted following among African-American audiences. In 2005, Forbes reported that he had sold "more than $100 million in tickets, $30 million in videos of his shows and an estimated $20 million in merchandise", and "the 300 live shows he produces each year are attended by an average of 35,000 people a week".

Perry describes himself as a Christian. He has become good friends with Janet Jackson, Will Smith, and Oprah Winfrey.[ Many of the themes in his work reflect theology and social behavior indicative of the predominantly Black church culture, such as the many scenes in both his stage and screen work that feature church settings and worship styles commonly found in predominantly African American churches, including showcases of gospel music and artists.

He lives and works in Southwest Atlanta where he operates the Tyler Perry movies and TV studios. In August 2010, it was reported that he had purchased Dean Gardens, a 58-acre (230,000 m2) estate in the Atlanta suburb of Johns Creek. He was reportedly planning to tear down the existing 32,000-square-foot (3,000 m2) mansion and build a new, environmentally friendly home on the property.