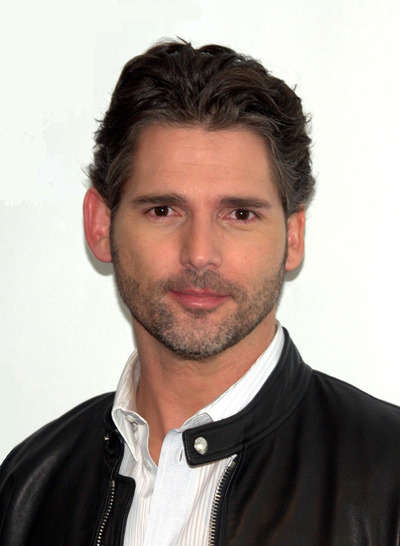 Eric Bana (born Eric Banadinović; 9 August 1968) is an Australian actor. He began his career as a comedian in the sketch comedy series Full Frontal before gaining critical recognition in the biographical crime film Chopper (2000). After a decade of roles in Australian TV shows and films, Bana gained Hollywood's attention for his performance in the war film Black Hawk Down (2001) and by playing the lead role as Hulk/Bruce Banner in the Ang Lee-directed Marvel Comics film Hulk (2003) with Jennifer Connelly. He has since played Hector in the movie Troy (2004), the lead in Steven Spielberg's historical drama and political thriller Munich (2005), and the villain Nero in the science-fiction film Star Trek (2009). In 2013, he played Lt. Cmdr. Erik S. Kristensen in the war film Lone Survivor and in the following year he played police sergeant Ralph Sarchie in the horror film Deliver Us from Evil.

An accomplished dramatic actor and comedian, he received Australia's highest film and television awards for his performances in Chopper, Full Frontal and Romulus, My Father. Bana has performed across a wide spectrum of leading roles in a variety of low-budget and major studio films, ranging from romantic comedies and drama to science fiction and action thrillers.

Bana was born in Melbourne, Victoria. His father, Ivan, was Croatian and worked as a logistics manager for Caterpillar, Inc., and his German-born mother, Eleanor, was a hairdresser (she was born near Mannheim). He has one older brother, Anthony. Bana grew up in Melbourne's Tullamarine, a suburban area on the northern edge of the city, near Melbourne's international airport, and attended Penleigh and Essendon Grammar School. In a cover story for the Mail on Sunday, he told author Antonella Gambotto-Burke that his family had suffered from racist taunts, and that it had distressed him. "Wog is such a terrible word," he said. He has stated: "I have always been proud of my origin, which had a big influence on my upbringing. I have always been in the company of people of European origin”.

Showing acting skill early in life, Bana began doing impressions of family members at the age of six or seven, first mimicking his grandfather's walk, voice and mannerisms. In school, he mimicked his teachers as a means to get out of trouble. As a teen, he watched the Mel Gibson film Mad Max (1979), and decided he wanted to become an actor. However, he did not seriously consider a career in the performing arts until 1991 when he was persuaded to try comedy while working as a barman at Melbourne's Castle Hotel. His stand-up gigs in inner-city pubs did not provide him with enough income to support himself, however, so he continued his work as a barman and waiting tables.

In 1993, Bana made his television debut on Steve Vizard's late night talk show, Tonight Live. His performance gained the attention of producers from the sketch comedy series, Full Frontal, who invited him to join the show as a writer and performer. During his four years on the show, Bana wrote much of his own material, and based some of his characters on members of his family. His impressions of Columbo, Arnold Schwarzenegger, Sylvester Stallone, and Tom Cruise made Bana popular with the show's audience. This success led him to record the comedy album Out of Bounds in 1994 and to host his own television special, titled Eric, in 1996. The show, a collection of sketches featuring everyday characters, prompted him to launch a sketch comedy series The Eric Bana Show. The series, written and performed by Bana, featured skits, stand-up and celebrity guests, but failed to attract a substantial audience and was cancelled after only eight episodes due to low ratings. Even so, in 1997, he received a Logie Award for "Most Popular Comedy Personality" for his work on the show.

That same year, Bana made his film debut in the Australian film The Castle, which tells the story of a Melbourne-based family's struggles to keep their home by Melbourne's airport as the airport authority force them to move. He was featured in a supporting role as Con Petropoulous, a kickboxing accountant who is the householder's son-in-law. The Castle was a surprise critical and financial success, earning A$10,326,428 at the box office in Australia.

In 1997, in spite of his lack of experience in dramatic roles, Bana was approached by director Andrew Dominik to appear in the film Chopper (2000), a biographical film based on the life of infamous Australian criminal Chopper Read. Dominik had been working on the project for five years, but was unable to find an actor to portray Read. Only after Read himself suggested Bana, having seen him perform a skit on television, did Dominik consider him for the part.

For the role, Bana shaved his head, gained thirty pounds, and spent two days with Read to perfect his mimicry. During filming he arrived on set at four in the morning and spent five hours being covered in Read's trademark tattoos. In spite of the film's limited release outside of Australia, Bana's performance received positive reviews. American film critic Roger Ebert complimented Bana, stating that "in a comedian named Eric Bana the filmmakers have found, I think, a future star ... He has a quality no acting school can teach you and few actors can match. You cannot look away from him". Chopper was a critical and financial success in Australia, and was nominated for Best Film at the Australian Film Institute Awards in 2001. Bana's performance won the Australian Film Institute Award for Best Actor.

In 2001, director Ridley Scott cast Bana as an American soldier in the film Black Hawk Down (2001). Scott, with a recommendation from Russell Crowe and impressed by Bana's performance in Chopper, did not require him to audition. In the film, he played Sergeant First Class Norm 'Hoot' Hooten, an elite Delta Force soldier, who fights his way out of a battle in Mogadishu, Somalia after a mission to capture two top lieutenants of a renegade warlord goes awry. Bana shed the weight he had gained for Chopper and began an exercise regimen months before filming began. He also trained with Delta Force operators at Fort Bragg, learning to fire weapons and clear rooms.

Bana's next project was the low-budget Australian film The Nugget (2002). A comedy, the film portrays the effect of instant wealth on three working class men and was released with moderate success in Australia. Bana read the script after filming Chopper in 2000 and was drawn to it because it reminded him of his childhood and because he found its characters amusing and likeable. While filming The Nugget, Bana was offered the lead role of Bruce Banner in the film adaptation of the popular Marvel Comic book series The Incredible Hulk. Only after learning of director Ang Lee's involvement in the project did he consider the role. Bana admired Lee for his work on the film The Ice Storm and agreed to work on the film before the final script was complete. He said he was drawn to the film because "the character of Bruce Banner had dramatic potential" and was "a fairly non-traditional superhero". Hulk (2003) received mixed reviews and a moderate success at the box office, but Bana's performance was praised: Jack Matthews of the New York Daily News felt that Bana played the role of Bruce Banner "with great conviction". Bana earned an Academy of Science Fiction, Fantasy & Horror Films nomination for "Cinescape Genre Face of the Future" for the film.

In 2004, Bana co-starred with Brad Pitt in the big-budget film Troy. In the film, he played Prince Hector, leader of the Trojan forces battling against the Greek warrior Achilles. Director Wolfgang Petersen offered him a role in the film after meeting with Brad Pitt, a fan of Chopper. The film was an international success, grossing US$364 million, with US$133 million in the US.

After the critical disappointment of Hulk and Troy, critics questioned Bana's bankability in big-budget films. He responded in Empire Magazine: "It's not like it [Hulk] was a flop. When you're on a long shoot it is a long personal investment. If I wasn't happy with the end result I'd be bloody upset, but in every case so far I've been happy. Troy could take $50 and I wouldn't regret it."

The following year, Bana co-starred with Daniel Craig and Geoffrey Rush in Steven Spielberg's controversial film Munich. Bana played Avner, a Mossad agent, who is ordered to track down and kill the Black September terrorists thought to be responsible for the massacre of Israeli athletes at the 1972 Summer Olympics. The film was a critical success, and was nominated for five Academy Awards in 2006. The Los Angeles Times wrote that Bana as Avner "projects a combination of sensitivity and ruthlessness and ... knows how to present a face for which worry is a new experience."

In 1995, while working on the television series Full Frontal, Bana began dating Rebecca Gleeson, a publicist with the Seven Network and daughter of then Chief Justice of New South Wales, and later Chief Justice of Australia, Murray Gleeson. They married in 1997, after Bana proposed to her on a trip to the United States, which he won from Cleo Magazine after being named their "Bachelor of the Year" in 1996. Bana and Gleeson have two children, a son, Klaus (born August 1999), and a daughter, Sophia (born April 2002). They live in Melbourne. On official identity documents he still has his birth surname, Banadinović.