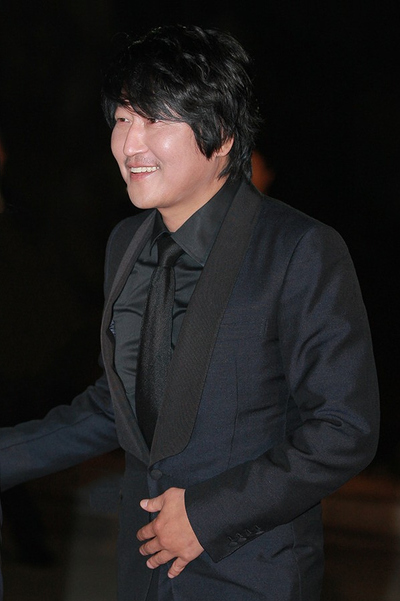 Following his debut appearance in The Day a Pig Fell into the Well, Song came to national prominence with a series of critically acclaimed performances in films such as No. 3, Joint Security Area, Memories of Murder and The Host. He also starred in the internationally released science fiction film Snowpiercer and box office hit A Taxi Driver.

Together with Choi Min-sik and Sol Kyung-gu, Song is considered to be one of the most talented actors in South Korea.

Song Kang-ho never professionally trained as an actor, beginning his career in social theater groups after graduating from Gimhae High School. After getting a Broadcasting degree from Busan Kyungsang College, he later joined Kee Kuk-seo's influential theatre company with its emphasis on instinctive acting and improvisation which proved Song's training ground. He made his stage premiere in 1991, in the play Dongseung. Although regularly approached to act in films, he always turned down the opportunity until taking a role as an extra in Hong Sang-soo's The Day a Pig Fell into the Well (1996).

In the following year, after portraying one of the homeless in Jang Sun-woo's docu-style Bad Movie, he gained cult notoriety for his show-stealing performance in Song Neung-han's No. 3 as a gangster training a group of young recruits, winning his first acting award at the Blue Dragon Film Awards. Following this, Song was cast in several supporting roles before his high-profile appearance as Han Suk-kyu's secret agent partner in Kang Je-gyu's blockbuster thriller Shiri.

In early 2000, Song's popularity increased with his first leading role in the box office smash The Foul King, for which he reputedly did most of his own stunts. However, it was with his award-winning role as a North Korean sergeant in Joint Security Area that he came to be regarded as one of South Korea's leading actors. Song also starred in Park Chan-wook's acclaimed followup, Sympathy for Mr. Vengeance, which centers on a father's pursuit of his daughter's kidnappers.

In 2002, Song starred in another major production by Myung Films, YMCA Baseball Team, about Korea's first baseball team which formed in the early 20th century. The following year he played a leading role as an incompetent rural detective in yet another critically acclaimed smash hit, Memories of Murder from young director Bong Joon-ho.

In 2004, Song starred in The President's Barber by debut director Im Charn-sang, which imagines the life of South Korean president Park Chung-hee's personal barber. The following year he also took the lead in Antarctic Journal, a big-budget project by debut director Yim Pil-sung, about an expedition in Antarctica that performed weakly at the box-office.

In 2006, Song was thrust back in the spotlight, however, with a leading role in Bong Joon-ho's record-breaking creature movie The Host. The film helped to broaden international awareness of Song's talent, and indeed he beat out several of Asia's best known stars to be named Best Actor at the inaugural Asian Film Awards held in Hong Kong in March 2007.

Song has continued to star in a number of critically acclaimed films; including period film The Throne, a new spin on the relationship between King Yeongjo and Prince Sado; period action film The Age of Shadows, and A Taxi Driver, a film which depicts the 1980 Gwangju Democratization Movement.