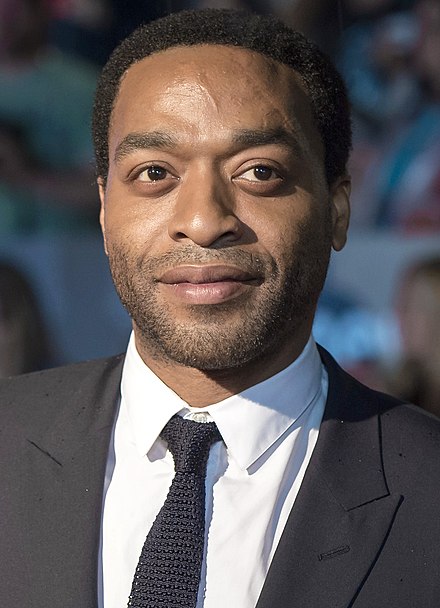 Chiwetelu Umeadi "Chiwetel" Ejiofor, CBE (born 10 July 1977) is an English actor, director, and writer. After enrolling at the National Youth Theatre in 1995, and gaining a scholarship to the London Academy of Music and Dramatic Art, at age 19 and three months into his course, Ejiofor was cast by Steven Spielberg to play a supporting part in the film Amistad as James Covey.

Ejiofor is known for his portrayal of Okwe in Dirty Pretty Things (2002), the Operative in Serenity (2005), Lola in Kinky Boots (2005), Luke in Children of Men (2006), and Dr. Adrian Helmsley in 2012 (2009). He played Solomon Northup in 12 Years a Slave (2013), for which he received Academy Award and Golden Globe nominations, along with the BAFTA Award for Best Actor. He was nominated for a 2014 Primetime Emmy Award for Outstanding Lead Actor in a Miniseries or a Movie for his performance in Dancing on the Edge.

Ejiofor has received numerous awards and nominations for acting, including the BAFTA Orange Rising Star Award in 2006, five Golden Globe Award nominations, and the Laurence Olivier Award for Best Actor for his performance in Othello in 2008. In 2008, he was awarded an OBE by Queen Elizabeth II for services to the arts. He was elevated to Commander of the Order of the British Empire in the 2015 Birthday Honours.

Ejiofor was born in London's Forest Gate, to Nigerian parents of Igbo origin. His father, Arinze, was a doctor, and his mother, Obiajulu, was a pharmacist. His younger sister is CNN correspondent Zain Asher.

In 1988, when Ejiofor was 11, during a family trip to Nigeria for a wedding, he and his father were driving to Lagos after the celebrations when their car was involved in a head-on crash with a lorry. His father was killed, but Ejiofor survived. He was badly injured, and received scars that are still visible on his forehead. Ejiofor began acting in school plays at the age of thirteen at Dulwich College and joined the National Youth Theatre. He got into the London Academy of Music and Dramatic Art but had to leave after his first year, after being cast in Steven Spielberg's film Amistad. He played the title role in Othello at the Bloomsbury Theatre in September 1995, and again at the Theatre Royal, Glasgow in 1996, when he starred opposite Rachael Stirling as Desdemona.

Ejiofor made his film debut in the television film Deadly Voyage in 1996. He went on to become a stage actor in London. In Steven Spielberg's Amistad, he gave support to Djimon Hounsou's Cinque as interpreter Ens. James Covey. In 1999, he appeared in the British film G:MT – Greenwich Mean Time. In 2000, he starred in Blue/Orange at the Royal National Theatre (Cottesloe stage), and later at the Duchess Theatre. That same year, his performance as Romeo in William Shakespeare's Romeo and Juliet was nominated for the Ian Charleson Award. Ejiofor was awarded the Jack Tinker Award for Most Promising Newcomer at the Critics' Circle Theatre Awards in 2000. For his performance in Blue/Orange, Ejiofor received the London Evening Standard Theatre Award for Outstanding Newcomer in 2000 and a nomination for the Laurence Olivier Award for Best Supporting Actor in 2001.

Ejiofor had his first leading film role in 2002's Dirty Pretty Things, for which he won a British Independent Film Award for best actor. In the following year, he was part of the ensemble cast of Love Actually, starred in a BBC adaptation of Chaucer's The Knight's Tale and also starred in the BBC series Trust. Also in 2003, he starred in the lead role of Augustus in the radio production of Rita Dove's poetic drama "The Darker Face of the Earth", which premiered on the BBC World Service on 23 August of that year, marking the International Day for the Remembrance of the Slave Trade and its Abolition. He starred alongside Hilary Swank in 2004's Red Dust, portraying the fictional politician Alex Mpondo of post-apartheid South Africa. He played the central part of Prince Alamayou in Peter Spafford's radio play I Was a Stranger, broadcast on BBC Radio 4 on 17 May 2004, and he played the god Dionysus, alongside Paul Scofield's Cadmus and Diana Rigg's Agave, in Andrew Rissik's play, Dionysus, based upon Euripides' Bacchae, also broadcast by the BBC. He played Mike Terry, in the cult film Redbelt that received favourable reviews. He also received acclaim for his performance as a complex antagonist The Operative in the 2005 film Serenity. Ejiofor played a revolutionary in the 2006 film Children of Men. His singing and acting performance in Kinky Boots received a Golden Globe Award and British Independent Film Award nomination. He was also nominated for the BAFTA Orange Rising Star Award in 2006, which recognises emerging British film talent. Ejiofor's performance in Tsunami: The Aftermath received a Golden Globe Award nomination for Best Actor – Miniseries or Television Film in 2007.

Ejiofor is in a relationship with a Canadian actress and model Sari Mercer. His sister is CNN reporter Zain Asher.