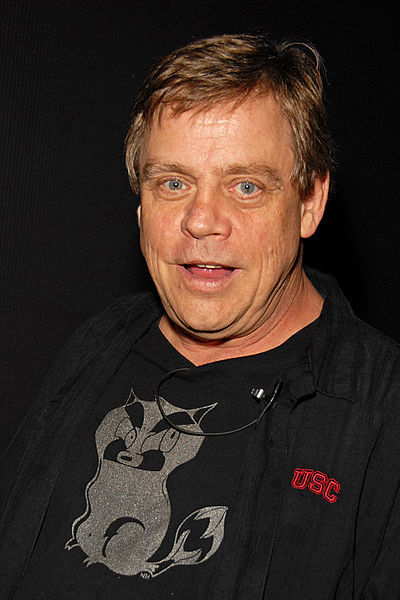 Mark Richard Hamill (born September 25, 1951) is an American actor, voice actor, producer, director, and writer. He is best known for his starring role as Luke Skywalker in the original Star Wars trilogy, and his voice role as the Joker in Batman: The Animated Series, its spin-offs, and the acclaimed video games Batman: Arkham Asylum and Batman: Arkham City. Hamill has also lent his voice to various other villains and anti-heroes in various other animated productions.

Hamill was born in Oakland, California, and raised in Virginia. He is the son of Virginia Suzanne (born Johnson) and William Thomas Hamill, who was a captain in the U.S. Navy. He is one of seven children, including two brothers, Will and Patrick, and four sisters, Terry, Jan, Jeanie, and Kim. His mother was of half Swedish descent. When Mark was a child, his father's career meant moving on numerous occasions and subsequently, he attended different schools throughout his early life. In his elementary years, he went to Walsingham Academy and Poe Middle School. At age eleven, he moved to the 5900 block of Castleton Drive in San Diego where he attended Hale Junior High School and then, during his first year at James Madison Senior High School, his family moved to Virginia. By junior year, his father was stationed in Japan where Mark attended Nile C. Kinnick High School on Yokosuka Naval Base, near Yokohama and was a member of the drama club. After that he attended Annandale High School in Annandale, Virginia. He subsequently enrolled at Los Angeles City College and majored in drama.

Hamill's early career included voicing the character Corey Anders on the Saturday morning cartoon Jeannie by Hanna-Barbera Productions. He also portrayed the oldest son, David, on the pilot episode of Eight Is Enough, though the role was later performed by Grant Goodeve. He acted in TV series such as The Texas Wheelers, General Hospital, The Partridge Family, and One Day at a Time. One of his earliest films was the made-for-TV film The City.

Robert Englund was auditioning for a part in Apocalypse Now when he walked across the hall where auditions were taking place for George Lucas's Star Wars. After watching the auditions for a while, he realized that his friend, aspiring actor Mark Hamill, would be perfect for the role of Luke Skywalker. He suggested to Hamill that he audition for the part; Hamill did, and won the role.

Released in the summer of 1977, Star Wars was an enormous, unexpected success and made a huge impact on the film industry. Hamill also appeared in the Star Wars Holiday Special (1978) and later starred in the successful Star Wars sequels The Empire Strikes Back (1980) and Return of the Jedi (1983). For each of the sequels, Hamill was honored with the Saturn Award for Best Actor given by the Academy of Science Fiction, Fantasy, & Horror Films.

Mark Hamill has gained a reputation as a prolific voice actor. He previously did voice acting work in the Ralph Bakshi film Wizards, where he played "Sean, leader of the Knights of Stardust," which was released just three months before Star Wars in 1977. Though the voice-role he is most known for is Batman's archenemy the Joker, his success as the Joker has led him to portray a wide variety of characters (mostly villainous) in television, film, anime, and video games. Mark Hamill was also the voice of The Hobgoblin in the 1990s Spider-Man cartoon series.

On April 29, 2014, Hamill was announced as a cast member of Star Wars Episode VII by theThe Walt Disney Company.

For over a year prior to the announcement both Disney and Hamill were coy about whether he would be a cast member. In an interview with Bloomberg Businessweek in March 2013, George Lucas hinted that Hamill, along with his Star Wars co-stars Carrie Fisher and Harrison Ford, would reprise their respective roles in Star Wars: Episode VII. Hamill confirmed similar information to ETOnline.com in February 2013, saying, "They're talking to us. George wanted to know whether we'd be interested...we haven't signed any contracts." Hamill said he knew nothing about the storyline. In September 2013, Robert Englund, actor and longtime friend of Mark Hamill, said that Hamill was currently working out in the gym. Englund stated "Mark now – they've got Mark in the gym, because Mark's coming back as Luke Skywalker. They've got him doing his sit-ups." It was previously reported that both Hamill and Fisher had been assigned nutritionists and personal trainers to work with ahead of production.

On December 17, 1978, Hamill married dental hygienist Marilou York in a private civil ceremony. They have three children together: Nathan (born June 25, 1979), Griffin (born March 4, 1983) and Chelsea Elizabeth (born July 27, 1988). His son Nathan was born during the production of The Empire Strikes Back and had a cameo role in Star Wars Episode I: The Phantom Menace (1999) playing one of the Royal Guards of Naboo.