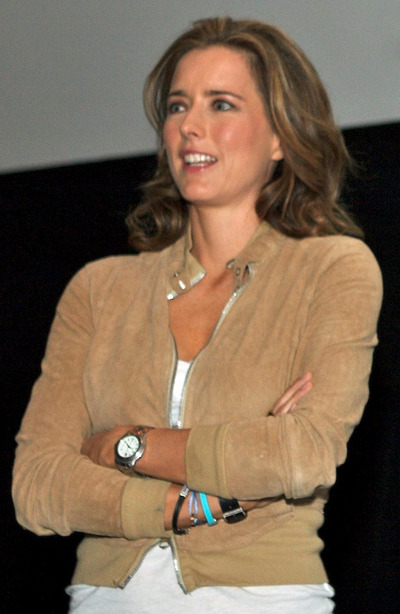 Leoni was born in New York City. Her mother, Emily Ann (née Patterson), was a dietician and nutritionist, and her father, Anthony Pantaleoni, was a corporate lawyer of the firm Fulbright & Jaworski. Leoni's paternal grandfather was of Italian and English descent; he was a nephew of Italian economist and politician Maffeo Pantaleoni. Leoni's paternal grandmother, Polish-American Helenka Adamowska Pantaleoni, a relative of Ignacy Jan Paderewski, was a film and stage actress who was a daughter of musicians Józef Adamowski and Antonina Szumowska-Adamowska; with Józef's brother Timothee Adamowski, they were the Adamowski Trio. Leoni's mother is a native of Texas, and was the niece of actor Hank Patterson.

Leoni attended two private schools, Brearley School and The Putney School. She attended but did not complete studies at Sarah Lawrence College.

In 1988, Leoni was cast as one of the stars of Angels 88, an updated version of the 1970s show Charlie's Angels. In May 1988, Life magazine ran a story on the casting of this new series. After production delays, the show never aired. The following year, Leoni starred as "Lisa DiNapoli" in the TV daytime drama Santa Barbara.

Leoni went on to appear in the women's baseball film A League of Their Own in 1992. Later in the year, she starred with Corey Parker in the single-season Fox sitcom Flying Blind, playing an eccentric, downtown-Manhattan libertine who falls in love with an ordinary Long Island college graduate. In February 1995, she appeared in the sitcom Frasier as the fiancée of Sam Malone (Ted Danson) in a crossover from Cheers, from which Frasier had spun off.

Leoni also landed the lead role in the sitcom The Naked Truth, playing Nora Wilde, a tabloid news journalist. The show ran through 1998. In the 2000 episode of the The X-Files "Hollywood A.D." (season 7, episode 19), Leoni played an actress portraying Dana Scully in a movie under her own name.

Leoni's film work includes a lead role in Deep Impact, a big-budget disaster film about a comet menacing Earth; and Jurassic Park III, The Family Man, Bad Boys, and You Kill Me. She starred as a film studio executive in Hollywood Ending for director Woody Allen, portraying his ex-wife, and in Spanglish as the emotionally unstable wife of Adam Sandler.

Leoni married her second husband, actor David Duchovny, on May 6, 1997, after an eight-week courtship. They have a daughter, Madelaine West, born in 1999, and son, Kyd Miller, born in 2002. On October 15, 2008, Leoni and Duchovny confirmed that they had been separated "for several months." The media attributed the separation to Duchovny's much publicized sexual addiction. The couple publicly reconciled and were seen frequently together as a family. On June 29, 2011, CNN reported that Leoni and Duchovny had once again split.