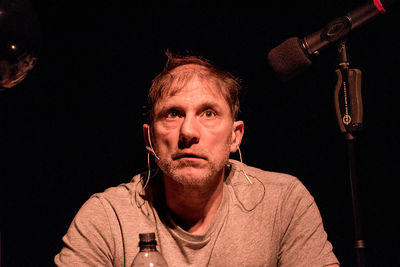 Simon Montagu McBurney, OBE (born 25 August 1957) is an English actor, writer and director. He is the founder and artistic director of the Théâtre de Complicité, London. He has had roles in the films The Manchurian Candidate, Friends with Money, The Golden Compass, The Duchess, Robin Hood, Harry Potter and the Deathly Hallows: Part 1, Tinker Tailor Soldier Spy, Magic in the Moonlight, The Theory of Everything and Mission: Impossible – Rogue Nation.

McBurney was born in Cambridge, England. His father, Charles McBurney, was an American archaeologist and academic. Charles McBurney was the grandson of the American surgeon Charles McBurney (who was credited with describing medical sign McBurney's point, though critics have since challenged its existence). His mother, Anne Francis Edmondstone (née Charles), was a secretary; she was British, and of English, Scottish and Irish ancestry. His parents were distant cousins who met during World War II. He studied English literature at Peterhouse, Cambridge, graduating in 1980. After his father died, he moved to Paris and trained for the theatre at the Jacques Lecoq Institute.

McBurney is a founder and artistic director of the UK-based theatre company Complicite, which performs throughout the world. He directed their productions of Street of Crocodiles (1992); The Three Lives of Lucie Cabrol (1994), which was adapted from the John Berger trilogy Into Their Labors; To the Wedding (another Berger collaboration); Mnemonic (1999); The Elephant Vanishes (2003); A Disappearing Number (2007); A Dog's Heart (2010); and The Master and Margarita (2011).

A Disappearing Number was a devised piece conceived and directed by McBurney, taking as its inspiration the story of the collaboration between two of the 20th century's most remarkable pure mathematicians, the Indian genius Srinivasa Ramanujan, and Cambridge don G.H. Hardy. It played at the Barbican in autumn 2008 and toured internationally. In February 2009, McBurney directed the Complicite production Shun-kin, based on two texts by Jun'ichiro Tanizaki. It was produced in London and Tokyo in 2010.

On a freelance basis, McBurney directed the following: The Resistible Rise of Arturo Ui and All My Sons (2008) (both in New York City), and live comedy shows, including Lenny Henry's So Much Things To Say and French and Saunders' Live in 2000.

McBurney is an established screen actor. He played the recurring role of Cecil the choirmaster in The Vicar of Dibley, CIA computer whiz Garland in Body of Lies, Dr. Atticus Noyle in The Manchurian Candidate (2004), Nigel Stone in The Last King of Scotland, the metrosexual husband Aaron in Friends with Money, Fra Pavel in The Golden Compass, Charles James Fox in The Duchess, and Oliver Lacon in Tinker Tailor Soldier Spy. He also wrote the story and was an executive producer for Mr. Bean's Holiday.

From 2010 to 2014, he appeared in the BBC comedy television series Rev., portraying the role of Archdeacon Robert. McBurney provided the voice of Kreacher in Harry Potter and the Deathly Hallows – Part 1 (2010). In the series The Borgias, he portrayed the canon law expert Johannes Burchart. He is the Artiste Associé of the 66th Festival d'Avignon (2012). In the premiere of The Encounter at the 2015 Edinburgh International Festival, McBurney tells the story of photographer Loren McIntyre, who in 1969, found himself lost amongst the remote Korubo people of the Javari Valley, on the border between Brazil and Peru. In July 2015, he starred as Atlee, the director of MI6 and the secondary antagonist, in the blockbuster action spy thriller Mission: Impossible - Rogue Nation. He will next portray paranormal investigator Maurice Grosse in the upcoming horror film sequel The Conjuring 2.

He lives in London with his wife, the concert pianist Cassie Yukawa, and three children. In the 2005 New Year Honours, McBurney was appointed Officer of the Order of the British Empire (OBE) "for services to Drama"