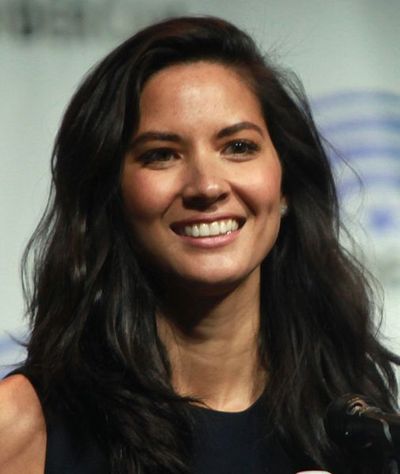 Lisa Olivia Munn (born July 3, 1980) is an American actress, model, television personality and author. She began her career being credited as Lisa Munn. Since 2006, she has been using the name Olivia Munn personally and professionally.

Born in Oklahoma City, Munn spent her childhood in Tokyo and Oklahoma City among other places and graduated from the University of Oklahoma. Munn began her professional career in television journalism before becoming an actress. In 2006, Munn starred as Mily Acuna in the series Beyond the Break. She co-hosted Attack of the Show! from 2006 to 2010 and was a correspondent on The Daily Show from 2010 to 2011. Munn has also had supporting roles in various films and television series since 2004.

Munn was born in Oklahoma City, Oklahoma. She is of German and Irish descent on her father's side and of Chinese descent on her mother's side (though her mother was born and raised in Vietnam). Her mother, Kim Schmid, fled to Oklahoma after the Vietnam War ended in 1975. After college, Kim Schmid married Winston Munn, Munn's biological father. When Munn was age two, her mother married her second husband, a member of the United States Air Force. Although the family relocated many times, Munn was predominantly raised in Tokyo,Japan, where the military stationed her stepfather. During this time, she appeared in a number of local theater productions, and later became a model within the Japanese fashion industry. Her mother and stepfather divorced and she moved back to Oklahoma, where she attended Putnam City North High School for her junior and senior years and where she was a contemporary with Hinder bassist Mike Rodden, future Oklahoma state senator David Holt and author Aaron Goldfarb. Munn also attended the University of Oklahoma, majoring in journalism and minoring in Japanese and dramatic arts.

After Munn graduated from college, she became an intern at the NBC affiliate in Tulsa, and later moved to Los Angeles to pursue an acting career.

In 2004, Munn interned at Fox Sports Net and worked as a sideline reporter for college football and women's basketball. She has gone on to say that she disliked the experience, explaining "I was trying to be something I wasn't, and that made me really uncomfortable on live TV."

Soon after she moved to Los Angeles, Munn was cast in a small role in the straight to video horror film Scarecrow Gone Wild. She appeared in rock band Zebrahead's video for their song "Hello Tomorrow" as the love interest of the lead singer Justin Mauriello.

Munn also appeared in National Lampoon's Strip Poker, which was filmed at the Hedonism II nudist resort in Negril, Jamaica, with Kato Kaelin. The films aired on DirecTV and InDemand Pay Per View.

In late 2005, Munn began her role as Mily Acuna, a teen surfer, over two seasons of the TV drama Beyond the Break on The N network. She enjoys surfing and continues to practice the sport. She originally auditioned for the part of Kai, but the producers wanted a "local girl". She also appeared in the film The Road to Canyon Lake.

In 2006, Munn moved on to the G4 network, where she began co-hosting Attack of the Show! with Kevin Pereira on April 10. She replaced departing host Sarah Lane. The network, devoted to the world of video games and the video game lifestyle, was at first hesitant to hire Munn. Although she admits video games were her "weak point", she was confident in her technical knowledge. On the show, Munn was featured with journalist Anna David in a segment called "In Your Pants", which deals with sex and relationship questions from viewers. While working on Attack of the Show!, Munn hosted Formula D, a now defunct program about American drift racing, and an online podcast called Around the Net (formerly known as The Daily Nut), for G4. Munn left Attack of the Show! in December 2010 and was replaced by Candace Bailey.

Munn appeared in the Rob Schneider film Big Stan (2007). She played Schneider's character's receptionist Maria. Munn had a significant role in the horror film Insanitarium in which she played a nurse at an insane asylum. She had roles in the films Date Night (2010) and Iron Man 2 (2010). Robert Downey, Jr. praised Munn for her improvisation skills and led the crew in a round of applause. Munn appeared in ABC Family's Greek, portraying Cappie's love interest, Lana. In May 2010, NBC announced that Munn would star in the upcoming television series Perfect Couples. The half-hour romantic comedy premiered on January 20, 2011. The show was cancelled before it completed its first season run.

In 2010, Munn guest-starred in NBC's Chuck as a CIA agent. In 2011, Munn appeared in the comedy film I Don't Know How She Does It (2011) as Momo. In 2012, Munn had a leading role in The Babymakers, she appeared in Magic Mike, directed by Steven Soderbergh. She plays Sloan Sabbith on HBO's The Newsroom. She also appeared as Angie, Nick's stripper girlfriend, in three episodes of FOX's New Girl Season 2 Episodes 10-13.

In regards to her faith and work in Deliver Us from Evil, Munn has stated that "I didn't believe in the supernatural before this movie"; however, the viewing of "actual footage from the New York Police Department of real-life exorcisms changed the actress' mind", and she has stated that "I'm a full believer [now]."