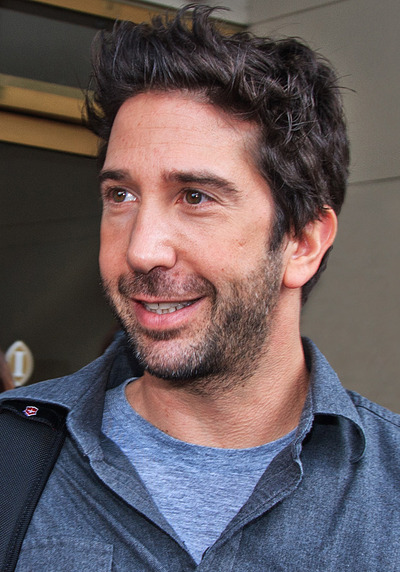 David Lawrence Schwimmer (born November 2, 1966) is an American actor and director of television, film, and theater. He was born in New York City, and his family moved to Los Angeles when he was two. He began his acting career performing in school plays at Beverly Hills High School. In 1988, he graduated from Northwestern University with a Bachelor of Arts in theater and speech. After graduation, Schwimmer co-founded the Lookingglass Theatre Company. For much of the late-1980s, he lived in Los Angeles as a struggling, unemployed actor.

He appeared in the television movie A Deadly Silence in 1989. He then appeared in a number of television roles, including L.A. Law, The Wonder Years, NYPD Blue, and Monty in the early 1990s. Schwimmer later gained worldwide recognition for playing Ross Geller in the sitcom Friends. His first leading film role was in The Pallbearer (1996), which was followed by roles in Kissing a Fool (1998), Six Days Seven Nights (1998), Apt Pupil, and Picking Up the Pieces (2000). He was then cast in the miniseries Band of Brothers (2001) as Herbert Sobel.

After the series finale of Friends in 2004, Schwimmer was cast as the titular character in the 2005 drama Duane Hopwood. Other film roles include Melman in the computer animated Madagascar films, the dark comedy Big Nothing (2006), and the thriller Nothing But the Truth (2008). Schwimmer made his London stage debut in the leading role in Some Girl(s) in 2005. In 2006, he made his Broadway debut in The Caine Mutiny Court-Martial. Schwimmer made his feature film directorial debut with the 2007 comedy Run Fatboy Run. The following year he made his Off-Broadway directorial debut in the 2008 production Fault Lines.

David Schwimmer was born on November 2, 1966, in Flushing, Queens, New York City, to attorneys Arthur and Arlene Colman-Schwimmer. Arlene was Elizabeth Taylor's attorney in her divorce from Larry Fortensky and Roseanne Barr's attorney in her divorce from Bill Pentland. He has an older sister named Ellie (born 1965). His family subsequently moved to Los Angeles, where Schwimmer had his first experiences of acting at the age of 10 when he was cast as the fairy godmother in a Jewish version of Cinderella. In 1979, Schwimmer went to a Shakespeare workshop given by English actor Ian McKellen in Los Angeles. He recalls that he was riveted by the experience. Schwimmer then entered a contest in the Southern California Shakespeare Festival three years in a row, winning two first prizes.

Following his mother's successful career as a divorce lawyer, the family moved to Beverly Hills, where Schwimmer attended Beverly Hills High School. Schwimmer admitted to being an outsider during his time at the school. Also a troublemaker and a bully, he did not fit in with the other kids. "When I was there I always felt: 'this is not me, I'm surrounded by people with a different value system. And I just wanted to get out of California.'" He was best at the subjects of science and math and thought he would become a doctor. Schwimmer enrolled in a drama class, where he appeared in stage productions. Encouraged by his school drama teacher to further his acting, he flew off to Chicago for an acting workshop. He noted that the experience was both "enlightening and exhilarating."

In 1984, Schwimmer graduated from Beverly Hills High, and wanted to go straight into acting, but his parents insisted he go to college first so he would have something to fall back on, in case his acting career did not work out. Schwimmer moved to Chicago to attend Northwestern University, where he had attended a summer drama course when he was 16 years old. At the university, he enrolled as a theater major, joining Delta Tau Delta Fraternity and Arts Alliance. After graduating in 1988, with a Bachelor of Arts degree in theater and speech, Schwimmer co-founded the Lookingglass Theatre Company. Subsequently, he returned to Los Angeles to pursue an acting career.

In the early 2000s, Schwimmer dated Australian pop singer Natalie Imbruglia, Israeli actress Mili Avital, and American actress Rochelle Ovitt. At the time, he noted that while he was raised without bias and prejudice, his "parents would be thrilled (if I married a Jew). It makes things a lot easier, sharing a cultural and religious background". In 2007, Schwimmer and English part-time photographer Zoe Buckman began a relationship. In March 2010, Schwimmer announced their engagement and married Buckman in a small private ceremony that June. On May 8, 2011, the couple had a daughter, Cleo Buckman Schwimmer.