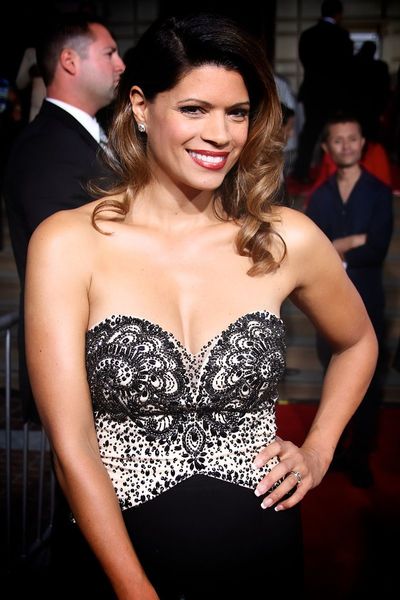 Andrea Navedo is an American actress. She began her career on the daytime soap operas One Life to Live (1995–97) and Guiding Light (1999-2000), and in later years had several supporting roles on primetime television. In 2014, Navedo began starring as Xiomara "Xo" Villanueva in The CW comedy-drama series, Jane the Virgin.

Navedo was born in the Bronx. A second-generation New York Puerto Rican, she grew up in New York City. She said she relates to her Jane the Virgin character because her mother was also a young single mother. Navedo graduated from DeWitt Clinton High School in 1988 and graduated from the State University of New York at Old Westbury in 1999 with a BA in Communicative and Creative Arts and a concentration of Theater. Navedo was also featured in a DeWitt Clinton Notable Alumni article along side other famous alumni such as Stan Lee.

Navedo began her professional acting career on the daytime soap operas. From 1995 to 1997, she played the role of Linda Soto in the ABC soap opera, One Life to Live. In 1999, she joined the cast of CBS soap opera Guiding Light as Theresa Sandoval. She made her film debut with small part in Girl 6 (1996), and later guest starred in episodes of New York Undercover and The District. In 2001, Navedo co-starred in the action comedy film, Double Take.

From 2001 to 2004, Navedo had a recurring role on the NBC legal crime series, Law & Order, as Detective Ana Cordova. later guest-starred on Law & Order: Criminal Intent, Damages and Blue Bloods. Navedo also has appeared in the number of films such as Washington Heights, El Cantante and Remember Me. From 2011 to 2013, Navedo also had the recurring roles on How to Make It in America, Golden Boy and Law & Order: Special Victims Unit. She starred in the comedy film Superfast!, the parody of The Fast and the Furious film series.

In 2014, Navedo was cast in the series regular role of Xiomara "Xo" Villanueva, title character's mother (played by Gina Rodriguez) in The CW critically acclaimed comedy-drama series, Jane the Virgin. She received the 2015 Imagen Award for Best Supporting Actress – Television for her performance.