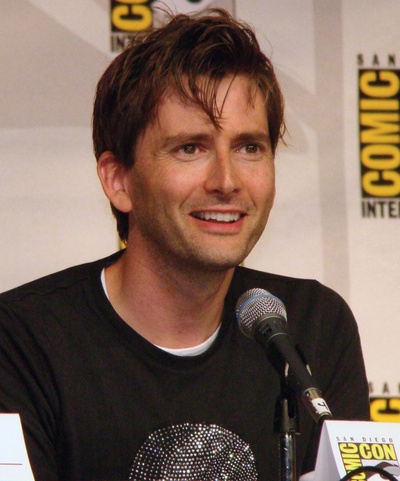 David Tennant (born David John McDonald; 18 April 1971) is a Scottish actor and voice actor. In addition to his work in theatre, including a critically acclaimed Hamlet, Tennant is known for his role as the tenth incarnation of the Doctor in Doctor Who, along with the title role in the TV serial Casanova (2005) and as Barty Crouch, Jr., in the film Harry Potter and the Goblet of Fire (2005).

Tennant was born in Bathgate, West Lothian, the son of Essdale Helen (née McLeod) and The Rev. Alexander "Sandy" McDonald. He grew up with his brother Blair and sister Karen in Ralston, Renfrewshire, where his father was the local Church of Scotland minister and former Moderator. Tennant's maternal great-grandparents, William and Agnes Blair, were staunch Protestants from Derry in Ulster, the northern province of Ireland, and were among the signatories of the Ulster Covenant in 1912; William was a member of the Grand Orange Lodge of Ireland. Tennant's maternal grandfather, footballer Archie McLeod, met William and Agnes's daughter Nellie while playing for Derry City. McLeod's parents were from the Isle of Mull in the Scottish Highlands and are descended from tenant farmers.

At the age of three, Tennant told his parents that he wanted to become an actor because he was a fan of Doctor Who, but they tried to encourage him to aim for more conventional work. He watched almost every Doctor Who episode for years, and he spoke to Tom Baker at a book-signing event in Glasgow. Tennant says he was "absurdly single-minded" in pursuing an acting career. Tennant was educated at Ralston Primary and Paisley Grammar School, where he enjoyed a fruitful relationship with English language teacher Moira Robertson, who was among the first to recognise his potential. He acted in school productions throughout primary and secondary school.

Tennant's talent at this young age was spotted by actress Edith MacArthur; after seeing his first role at age 11, she told his parents he would become a successful stage actor. Tennant also attended Saturday classes at the Royal Scottish Academy of Music and Drama; at 16, he passed an audition for the Academy, one of their youngest students, and studied there between the ages of 17 and 20, taking his stage name from the Pet Shop Boys frontman Neil Tennant after reading a copy of Smash Hits magazine because there was another David McDonald already on the books of the Equity union. Tennant was flatmates with friend Louise Delamere while at the Academy and gained a Bachelor of Arts in acting.