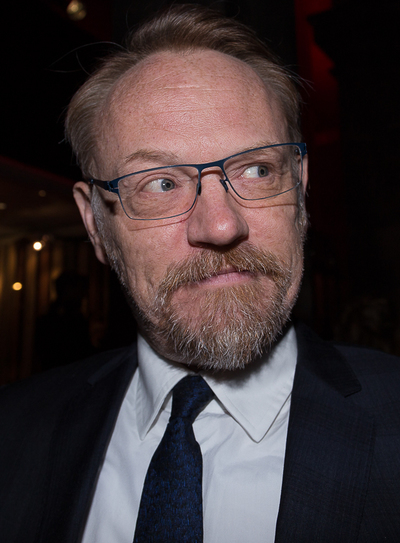 Jared Francis Harris (born 24 August 1961) is an English actor, best known for his roles as Lane Pryce on the AMC series Mad Men and David Robert Jones on the Fox science-fiction series Fringe. He has also appeared in films like Igby Goes Down, The Rachel Papers, Lost in Space, Resident Evil: Apocalypse, How to Kill Your Neighbor's Dog, Happiness, Mr. Deeds, The Curious Case of Benjamin Button, Sherlock Holmes: A Game of Shadows, and Lincoln.

Harris was born in London, one of three sons of the Irish actor Richard Harris and his first wife, Welsh actress Elizabeth Rees-Williams. His younger brother is actor Jamie Harris, and his older one director Damian Harris. His maternal grandfather was politician David Rees-Williams, 1st Baron Ogmore. From 1971 to 1975, actor Rex Harrison was married to his mother. His stepmother was actress Ann Turkel. He earned a BFA degree from Duke University in 1983.

Harris began his film career as director of an unfinished feature length film for Duke University's Freewater Films named Darkmoor in 1983. His first film appearance as an actor was in The Rachel Papers in 1989. He played the role of the aged Will Robinson in the movie adaptation of the television series Lost in Space. Harris played Dr. Charles Ashford in Resident Evil: Apocalypse, Benmont Tench in Jim Jarmusch's Dead Man, and Kenneth Branagh's character's doppelgänger in How to Kill Your Neighbor's Dog.

Other notable roles include King Henry VIII in the first film adaptation of the novel The Other Boleyn Girl. He also portrayed Andy Warhol in I Shot Andy Warhol, and John Lennon in the television movie Two of Us. In 1998 he played Vladimir in the black comedy drama film Happiness written and directed by Todd Solondz. He played the gruff Captain Anderson in the BBC2 adaptation of To the Ends of the Earth; Mac McGrath in the movie Mr. Deeds; Eamon Quinn on the FX series The Riches; and David Robert Jones on Fringe. One of his more recent film roles was Ulysses S. Grant in the Steven Spielberg-directed Lincoln.[1] He played Lane Pryce in Mad Men from 2009 until 2012.

Harris married Jacqueline Goldenberg in 1989 and divorced in the early 90s. On 16 July 2005, Harris married actress Emilia Fox, daughter of actors Edward Fox and Joanna David. He filed for divorce from Fox in January 2009. The divorce was finalised in June 2010.