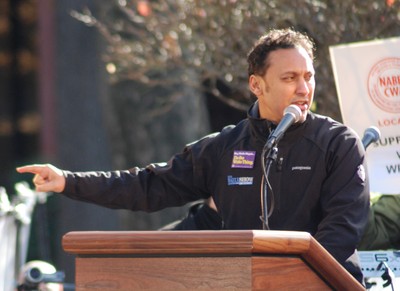 Aasif Hakim Mandviwala (born March 5, 1966), known professionally as Aasif Mandvi, is an Indian-American actor and comedian. He began appearing as an occasional contributing correspondent on The Daily Show on August 9, 2006. On March 12, 2007, he was promoted to a regular correspondent.

Mandvi was born in Bombay (now Mumbai), India, to a Muslim family. His family moved to Bradford, England, when he was a year old, where his father ran a corner shop and his mother was a nurse. Although Mandvi still identifies as a "working-class kid from Bradford", he attended the independent Woodhouse Grove School. His father grew frustrated with Margaret Thatcher's Britain, and Mandvi emigrated with his family to Tampa, Florida, when he was 16.

After graduating from the University of South Florida with a degree in Theatre, Mandvi worked as a performer at Disney-MGM Studios at Walt Disney World Resort. He later moved to New York City where he began appearing in off-Broadway productions. During this time he also was active in the band Cowboys and Indian. He won an Obie Award for his critically acclaimed one-man show Sakina's Restaurant.

Mandvi made his television debut as a doorman at the Biltmore Hotel in the episode "Line Of Fire" of the series Miami Vice. He has since appeared in numerous television shows: ER, The Sopranos, Sex and the City, CSI, Oz, Ed, The Bedford Diaries, Jericho, Sleeper Cell and various editions of Law & Order, including Criminal Intent, Special Victims Unit and Trial by Jury.

Mandvi played minor roles in the films The Siege and Die Hard with a Vengeance as well as the title role in Merchant Ivory Productions' film The Mystic Masseur. He also had a major supporting role in the independent film American Chai, playing the lead character's roommate, "Engineering Sam."