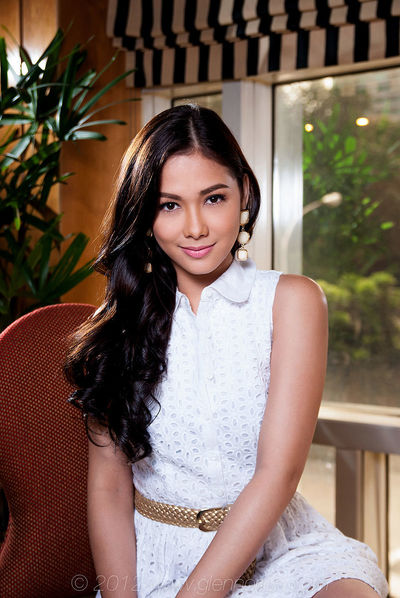 Maja Ross Andres Salvador (born October 5, 1988) is a Filipina singer, actress, dancer, model, and producer, She is known as the best actress in this generation. She is currently under the management of ABS-CBN's Star Magic and is regarded as the "Dance Princess". In 2011, Salvador co-produced and portrayed the title role in the film Thelma, which earned her the Gawad Urian Award and the Film Academy of the Philippines Award for Best Actress. In 2017, She is best known for her role as Lily Cruz / Ivy Aguas in the hit TV series Wildflower.

Maja was discovered in The Buzz, featuring her with the hope of meeting her father.

Salvador started her career in show business lightly. She played a minor role in It Might Be You (2003–2004), a series starring John Lloyd Cruz and Bea Alonzo. For the series Salvador garnered her first nomination for Best New Female TV Personality. After It Might Be You, Salvador then started appearing in ASAP (2003–present). She then started pairing up with other teen actors such as Rayver Cruz, John Wayne Sace, and Hero Angeles for the now defunct teenage television series Nginiig (2004–2006). Salvador, along with Cruz, Sace and Angeles, were all hosts of the series.

She then reunited with co-stars Rayver Cruz and John Wayne Sace for another teen-oriented television series. Salvador became part of the cast of Spirits (2004–2005), portraying the role of Gabby, an overachiever kid whose sunny ways ensures she is liked by everyone she meets. Salvador starred in several episodes of Maalaala Mo Kaya, a drama anthology series, and gained a nomination for Best Single Performance by an Actress for an episode entitled Regalo (2006). In 2006, Salvador made her film debut in the horror themed movie Sukob. She was nominated and won several awards for the movie, including Best Supporting Actress award. The film is considered one of the most scariest horror Filipino films made of all times. It topbilled actress Kris Aquino and Claudine Barretto.

After the success of her first film, Sukob, Salvador then starred in the Philippine comedy film First Day High (2006), opposite Kim Chiu, Gerald Anderson, Geoff Eigenmann and Jason Abalos. Shortly afterwards, she then became part of the cast of Sa Piling Mo (2006) playing the role of Marisa. Salvador gained even more fame after starring in the prime time series Pangarap na Bituin (2007). The series is the 2nd highest Musical Prime Time series after Sharon Cuneta's Bituing Walang Ningning. She then gained even more popularity after starring in One More Chance (2007), reuniting with It Might Be You co-stars John Lloyd Cruz and Bea Alonzo. Salvador received a nomination for Movie Supporting Actress of the Year. Salvador then starred in Susan Roces's Pataying Sa Sindak Si Barbara (2008), alongside Kris Aquino, Jodi Sta. Maria and veteran actress, Susan Roces.

After portraying several supporting roles in movies and television series, Salvador got her first leading role in Nagsimula sa Puso (2009–2010). The series revolves around a teacher named Celina who falls in love with her own student. This is the first partnership of love-team Maja Salvador and Coco Martin. Salvador starts opposite Nikki Gil, Jason Abalos and Jaclyn Jose. While also doing this series, she was also, at the time, also starring in the child-themed series May Bukas Pa (2009–2010), with child actor Zaijian Jaranilla. Salvador became a well known name after playing the roles of "Celina Fernandez" and "Stella Rodrigo".

Salvador experienced career expansion after playing several minor and supporting roles. She became the leading lady of Sam Milby during the 11th installment of the Precious Hearts Romances series. She, along with Milby, starred in the series entitled Impostor (2010). Shortly after, Salvador got another leading role in the miniseries of Wansapanataym entitled Inday sa Balitaw (2010). Salvador played the title role in the inspirational family drama film, Thelma (2011). She received 2 awards for the category of Best Actress for the film. Besides that, Salvador was also nominated twice.

She then became part of the cast in Minsan Lang Kita Iibigin (2011). Reuniting with her Nagsimula sa Puso leading man, Coco Martin, Salvador also starred with Andi Eigenmann, Martin del Rosario and veteran actress Lorna Tolentino. The series made Salvador's profile grow even more. After the successful finale of Minsan Lang Kita Iibigin, Salvador joined the cast of My Binondo Girl (2011–2012), reuniting for her First Day High co-star Kim Chiu. She played the role of Amber Dionisio, a rival of Jade (Chiu). Salvador then starred in the film My Cactus Heart (2012) with Xian Lim and Matteo Guidicelli, who she once starred with in the comedy-romance television series My Binondo Girl.

Shortly after My Cactus Heart, Salvador then became part of the cast in the anthology comedy film 24/7 in Love (2012). For her part in the film, Salvador was paired up with actor, Diether Ocampo. Their part in the film is about an officer worker (Salvador) and her boss (Ocampo) who then fall in love. The film involved showing some nude scenes including Diether Ocampo's posterior showing with Salvador in the room. She then returned to television and starred in another installment of the Precious Hearts Romances series. Salvador was once again the starring role and the series was entitled Lumayo Ka Man Sa Akin (2012). She starred alongside with Jason Abalos and Patrick Garcia.

Salvador then paired up with Kim Chiu, Xian Lim and Enchong Dee in the critically acclaimed prime time television series Ina, Kapatid, Anak (2012–2013). Portraying the role of Margaux Marasigan, she plays the main anti-heroine of the series. The series scored a great beginner rating of 25.8%, while the finale episode showed great appreciation from viewers garnering a 42.9% final episode. Following her successful portrayal in the series, Salvador received two nominations for Best Drama Actress for her role as Margaux. After Ina, Kapatid, Anak, Salvador did another comedy film and collaborated with Paulo Avelino and Jake Cuenca in Status: It's Complicated (2013).

In 2014, Salvador became part of the highly controversial prime time television series, The Legal Wife, starring alongside veteran actress Angel Locsin, Jericho Rosales and JC de Vera. She plays main antagonist of the series being the mistress of Adrian (Rosales) and rival to Monica (Locsin). For her involvement in The Legal Wife, Salvador got nominated for Best Drama Actress. Towards the end of the year, Salvador starred in the daytime television series, Give Love on Christmas (2014–2015). She did the 2nd installment of the series and it was titled The Gift of Life.

After Give Love on Christmas, Salvador's first project of 2015 was the critically acclaimed drama Bridges of Love, which showed in Latin countries including Peru. Salvador plays the lead role, Mia, who is torn between two lovers, Gael and Carlos, who are fighting for her love and are unknowingly biological brothers. She stars with Jericho Rosales, Paulo Avelino, Carmina Villarroel and veteran actor Edu Manzano. The series started off with a great beginning with a 21.9% in ratings and ended off with a 26.9% finale. For her portrayal as Mia, she got nominated once for Best Drama Actress, while winning the award three times in 2015–2016. While filming Bridges of Love, Salvador also starred in the movie You're Still the One (2015), opposite Richard Yap, Ellen Adarna and Dennis Trillo. The story focuses on the life of Elisse (Salvador) and how she is torn by choosing the right man who came at the wrong time or the wrong man who came at the right time.

Salvador then reunited with her Minsan Lang Kita Iibigin on-screen partner Coco Martin for a new project. She starred in Ang Probinsyano (2015–2016) opposite Susan Roces, Bela Padilla, John Prats, Arjo Atayde, Jaime Fabregas, Albert Martinez, Eddie Garcia and Agot Isidro. The series is one of the most highly rated television series ever produced by ABS-CBN by getting a 41.6% on its pilot episode. Salvador portrayed the role of SPO2 Glen Corpuz who is Cardo's (Martin) childhood best friend and police partner who secretly admires him. However, in August 2016, Salvador departed from the series with her contract ending. Her character was replaced by Yassi Pressman. She reprises her role for the comedy television series Home Sweetie Home (2016) as Glen Corpuz.

After her character's departure from Ang Probinsyano, Salvador plays the lead protagonist of the series in Wildflower (2017–present). In the series, she portrays the strong willed and vengeful Lily Cruz. The series currently occupies the pre-primetime slot, which is before ABS-CBN's flagship news show TV Patrol. The series enjoys high ratings with 20.1% for its pilot episode and peaking at 35.2%. The series, specifically the confrontation scenes of her character and Emilia Ardiente (played by her co-actress Aiko Melendez) is popular in social media and had been a subject of several memes.

On December 2013, it was announced that Salvador had signed a recording contract with Ivory Music & Video. While recording the album, Salvador worked with award-winning arranger and producer, Jonathan Ong. By March 2014, she revealed through her Instagram account that the title will be Believe along with its track listing which contains mainly original composition and two cover songs. The carrier single, "Dahan-Dahan", was released on March 6 while the album was released nationwide on March 25. The album also features collaborations with rapper Abra and Project Pinas. Salvador also co-wrote a song titled "Buong Gabi". She released her first single from the said album titled "Dahan Dahan".

On June 2014, the album was eventually certified gold for selling over 7,500 copies nationwide and Salvador appeared on ASAP to receive a Gold Record award. She also staged her first major sold out concert entitled "MAJ: The Legal Performer" on July 12 at the Music Museum. In September 14, 2014 she released her second single called "Halikana" featuring Abra. The same month the music reached at no. 7 in the top 10 Philippine pop music.

On March 15, 2015, during an interview with Myx she revealed details on her second album and that its carrier single will be released by the end of the month. On April 9, 2015, a photo was uploaded on Salvador's Facebook page showing herself on set to film a music video for the carrier single titled, "Bakit Ganito Ang Pag Ibig", with actor JC De Vera. The single was digitally released on April 17. Her second album, titled Maja In Love, was released on April 30. It features collaborations with Sam Milby and Rayver Cruz. In November she staged her second major concert at the Mall of Asia Arena, dubbed as Majasty. Maja Salvador then again staged her third concert at the Music Museum, dubbed as #OnlyMaja.

In 2017, it was announced that Salvador will team up with Thai popstar with Tor+Saksit for a new single.  The song, Falling Into You, was released on February 9, 2018.

Salvador is a member of a family of actors which includes her father, Ross Rival and uncle Phillip Salvador.

In 2013 Salvador joined the PETA campaign to Free Mali from captivity in Manila zoo and have her transferred to Boon Lott's Elephant Sanctuary where she can be given proper treatment and care. Mali is the only captive elephant in the Philippines and the zoo does not have adequate knowledge or resources to properly care for her.