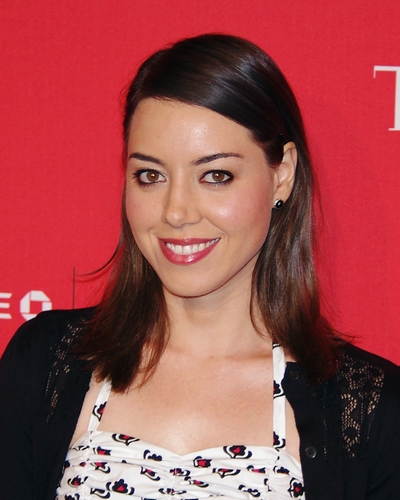 Aubrey Christina Plaza (born June 26, 1984) is an American actress and comedian. She portrayed April Ludgate on Parks and Recreation, and after appearing in supporting roles in several films, had her first leading role in the 2012 comedy Safety Not Guaranteed.

Plaza began her career as an intern. After performing improv and sketch comedy at the Upright Citizens Brigade Theater, she appeared in the web series The Jeannie Tate Show. She later appeared in films such as Funny People and Scott Pilgrim vs. the World.

Plaza was born in Wilmington, Delaware, the daughter of Bernadette, an attorney, and David Plaza, a financial advisor. She has two younger sisters, Renee and Natalie, the latter of whom she has used as inspiration for various characters.

Plaza was named after the song "Aubrey" by Bread. Her father is Puerto Rican and her mother is of Irish and English descent. Plaza has stated: "I was like the only diverse kid in my high school, and I'm half-Puerto Rican. But yeah, I have a huge family and tons of cousins in Puerto Rico." She participated in productions with the Wilmington Drama League.

Plaza attended an all-girls Catholic school from fourth to twelfth grade. Plaza graduated from Ursuline Academy in 2002, and New York University's Tisch School of the Arts in 2006. In high school she was student council president. While at NYU in 2004, Plaza suffered a stroke that caused temporary paralysis and expressive aphasia, but she has fully recovered.

Plaza has had many internships, including an "intern[ship] for Samba Post-Its"; one day, one of her jobs at Samba Post-Its was to "literally wallpaper a bathroom with Post-Its". She also worked as an NBC page. She served as a director's assistant to writer/producer/director Bennett Davlin during the making of his award-winning short film, TC3.

Plaza has performed improv and sketch comedy at the Upright Citizens Brigade Theater since 2004. She also performed stand-up and has appeared at the Laugh Factory and The Improv. In 2008, she participated in the Improv Everywhere prank "Mobile Desktop", in which she and two other people brought desktop PCs, including a CRT monitor, tower computer, keyboard and mouse into a Starbucks and used them as people use laptops there.

Plaza starred in the online series The Jeannie Tate Show, and stars as Robin Gibney in ESPN's Mayne Street. She also appeared in the first episode of "Terrible Decisions with Ben Schwartz" on Funny or Die.

She played Seth Rogen's love interest, Daisy, in 2009's Funny People directed by Judd Apatow. She also had roles in the comedy films Scott Pilgrim vs. the World and Derrick Comedy's Mystery Team, which debuted at 2009 Sundance. She appeared in a CollegeHumor short alongside Jason Bateman and Will Arnett.

She played April Ludgate, in Parks and Recreation, for her performance as the deadpan employee, she received universal praise throughout the entire show, being referred to as one of the show's breakout character. She also has a recurring role as "the Princess" in the comedic sci-fi web series Troopers on CollegeHumor.

On March 12, 2010, Plaza performed at A Night of 140 Tweets: A Celebrity Tweetathon for Haiti, produced by Rob Huebel, Paul Scheer, Ben Stiller, and Mike Rosenstein, at the Upright Citizens Brigade Theatre in Los Angeles. In 2011, she made a guest appearance in Portlandia. Plaza appeared as a guest judge during a roast segment on The Next Food Network Star in 2011. She appeared in Episode 199 of the WTF with Marc Maron podcast.

In early 2012, she was featured in Father John Misty's music video for the song "Hollywood Forever Cemetery Sings" from the album Fear Fun and in 2014 she was in Cassorla's "Bona Fide" video where she also made her saxophone playing debut.

In the summer of 2012, Plaza earned her first starring role in a major film, alongside Mark Duplass, in the comedy, Safety Not Guaranteed. In the film, Plaza plays Darius, a jaded intern who answers a curious want ad "seeking a companion for a time travelling adventure". Her performance in the film was critically acclaimed, and Gary Thompson of the Philadelphia Inquirer questions whether this role is out of her usual "pretty slacker" range but finds her performance "compelling".

At the 2013 MTV Movie Awards, Plaza "jumped onstage and tried to wrestle the (Golden Popcorn Award) statue from Will Ferrell's hand" during his acceptance speech; Ferrell integrated the interaction into his monologue as a planned moment, but the unscripted interruption led to Plaza's ejection from the event.

At the 2014 Sundance Film Festival in January 2014, Plaza's film, Life After Beth, which was written and directed by her boyfriend Jeff Baena, premiered.

On September 17, 2014, Lifetime Network announced that Plaza would do the speaking voice of Grumpy Cat in their upcoming original movie Grumpy Cat's Worst Christmas Ever. The film premiered on November 29, 2014 and received generally negative reviews.

She starred in Mike and Dave Need Wedding Dates alongside Zac Efron, Anna Kendrick and Adam DeVine. The film was released on July 8, 2016. Her role as the rebellious Tatiana earned her high critical praise, with her performance being constantly highlighted.

She was a guest star on HarmonQuest in 2016. An animated Pathfinder show that enlists a new star guest each episode that then usually kills off their guest in the end. She played a gnome named "Hawaiian Coffee" that helps the heroes bust out of jail using magic, alchemy, and even bomb potions.

As of 2011, Plaza is dating writer/director Jeff Baena.

Plaza is a member of the Los Angeles-based basketball team the Pistol Shrimps, alongside actresses Molly Hawkey and Angela Trimbur.

Regarding her sexuality, Plaza told The Advocate in 2016, "I fall in love with girls and guys. I can't help it."