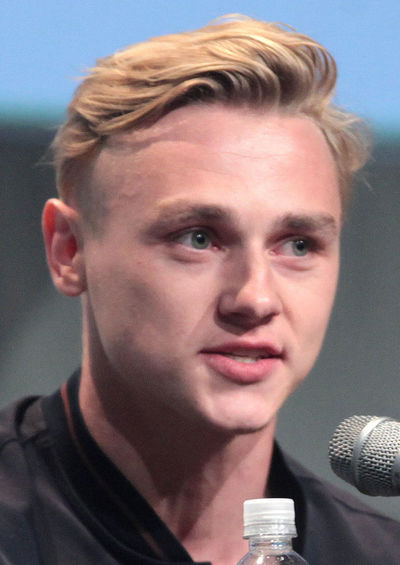 Ben Jones (born 2 January 1991), better known by his stage name, Ben Hardy, is a British actor and model. He is best known for playing the role of Peter Beale in the BBC soap opera EastEnders from 2013 to 2015. He will appear in his first film and Hollywood project as Angel in X-Men: Apocalypse (2016).

Hardy was born Ben Jones[2] on 2 January 1991 in England. He grew up in Sherborne and attended The Gryphon School and Sherborne Abbey CE VC Primary School.

Hardy starred in the play The Judas Kiss, written by David Hare, in 2012 and played the character Arthur Wellesley, a member of the hotel staff. The play was held in Hampstead Theatre on 6 September 2012 and later toured the UK.

On 19 April 2013 it was announced that Hardy would play Peter Beale in EastEnders, taking over from Thomas Law, who played the character from 2006 until 2010. Hardy said "I'm really excited to be joining the fantastic cast of EastEnders - a show which my family have watched for years. I can't wait to step into the shoes of a character with so much history and am looking forward to getting stuck in." He made his first appearance as Peter on 7 June 2013, returning to Walford after Ian invites him to the opening of his new restaurant, Beale's. On 19 November 2014, it was announced that Hardy would leave the show. An EastEnders spokesperson told Digital Spy, "We can confirm Ben will be leaving EastEnders at the end of his contract." Hardy made his final appearance on 24 February 2015 as Peter moved to New Zealand with his pregnant childhood sweetheart, Lauren Branning (Jacqueline Jossa).

Hardy joined the cast of X-Men: Apocalypse on 25 February 2015 in the role of Angel, following his departure from EastEnders.