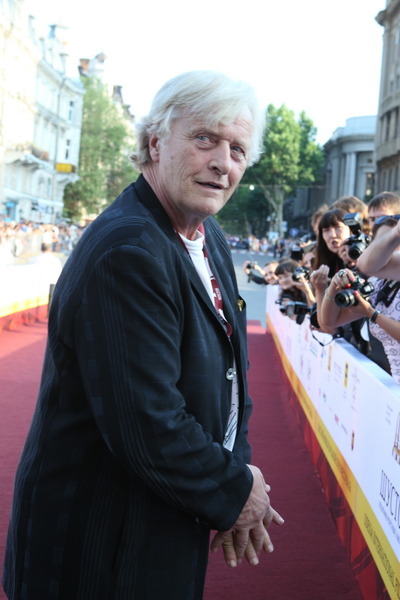 Rutger Oelsen Hauer (born 23 January 1944) is a Dutch actor, writer, and environmentalist. He has acted in both Dutch and English-language TV series and films.

His career began in 1969 with the title role in the Dutch television series Floris. His film credits include Flesh+Blood, Blind Fury, Blade Runner, The Hitcher, Escape from Sobibor (for which he won a Golden Globe Award for Best Supporting Actor), Nighthawks, Wedlock, Sin City, Confessions of a Dangerous Mind, Ladyhawke, Buffy the Vampire Slayer, The Osterman Weekend, The Blood of Heroes, Batman Begins, Hobo with a Shotgun, and The Rite.

Hauer was born on 23 January 1944 in Breukelen in the Netherlands. He is the son of drama teachers Teunke (née Mellema) and Arend Hauer. He has three sisters, one older and two younger.

Hauer grew up in Amsterdam. Since his parents were very occupied with their careers, he and his sisters were brought up mostly by nannies. He went to a Waldorf school.

At the age of 15, Hauer ran off to sea and spent a year scrubbing decks aboard a freighter. Returning home, he worked as an electrician and a joiner for three years while attending acting classes at night school. Hauer served in the Royal Netherlands Navy.

Hauer joined an experimental troupe, with which he remained for five years before Paul Verhoeven cast him in the lead role of the 1969 television series Floris, a Dutch medieval action drama. The role made him famous in his native country, and Hauer reprised his role for the 1975 German remake Floris von Rosemund. Hauer's career changed course when Verhoeven cast him in Turkish Delight (1973). The film found box office favour abroad and at home, and Hauer looked to appear in more international films. Within two years, Hauer made his English-language debut in the British film The Wilby Conspiracy (1975). Set in South Africa, the film was an action-drama with a focus on apartheid. Hauer's supporting role, however, was barely noticed in Hollywood, and he returned to Dutch films for several years. During this period, he made Katie Tippel (1975) and worked again with Verhoeven on Soldier of Orange (1977), and Spetters (1980). These two films paired Hauer with fellow Dutch actor Jeroen Krabbé.

Hauer made his American debut in the Sylvester Stallone film Nighthawks (1981) as a psychopathic and cold blooded terrorist named Wulfgar. The following year, he appeared in arguably his most famous and acclaimed role as the eccentric and violent but sympathetic anti-hero Roy Batty in Ridley Scott's 1982 science fiction thriller Blade Runner, in which he improvised the famous tears in rain monologue. Hauer went on to play the adventurer courting Theresa Russell in Eureka (1983), the investigative reporter opposite John Hurt in The Osterman Weekend (1983), the hardened Landsknecht mercenary Martin in Flesh & Blood (1985), and the knight paired with Michelle Pfeiffer in Ladyhawke (1985).

He continued to make an impression on audiences in The Hitcher (1986), in which he played a mysterious hitchhiker tormenting a lone motorist and murdering anyone in his way. At the height of Hauer's fame, he was set to be cast as RoboCop though the role went to Peter Weller. That same year, Hauer starred as Nick Randall in Wanted: Dead or Alive as the descendant of the character played by Steve McQueen in the television series of the same name. In The Legend of the Holy Drinker (1989), Hauer showed a more soulful side. Phillip Noyce also attempted to capitalize, with far less success, on Hauer's spiritual qualities in the martial arts action adventure Blind Fury (1989). Hauer returned to science fiction with The Blood of Heroes (1990), in which he played a former champion in a post-apocalyptic world.

By the 1990s, Hauer was well known for his humorous Guinness commercials as well as his screen roles, which had increasingly involved low-budget films such as Split Second, Omega Doom, and New World Disorder. He also appeared in the Kylie Minogue music video "On a Night Like This". In the late 1980s and 1990s, as well as in 2000, Hauer acted in several British and American television productions, including Inside the Third Reich, Escape from Sobibor (for which he received a Golden Globe Award for Best Supporting Actor), Fatherland, Amelia Earhart: The Final Flight as Amelia Earhart's navigator Noonan, Hostile Waters, Merlin, The 10th Kingdom, Smallville, Alias, and Salem's Lot. In 1999, Hauer was awarded the Dutch "Best Actor of the Century Rembrandt Award".

Hauer played an assassin in Confessions of a Dangerous Mind (2003), a villainous cardinal with influential power in Sin City (2005) and a devious corporate executive running Wayne Enterprises in Batman Begins (2005). He also played in the 2005 movie Dracula III: Asccension. He also hosted the British reality television documentary Shock Treatment in 2005. He starred in Goal! 2: Living the Dream... as Real Madrid coach Rudi Van Der Merwe. In 2007 he recorded the voice-overs for the UK advertising campaign for Lurpak butter. In 2009, his role in avant-garde filmmaker Cyrus Frisch's Dazzle, received positive reviews. The film was praised in Dutch press as "the most relevant Dutch film of the year". The same year, Hauer starred in the title role of Barbarossa, an Italian film directed by Renzo Martinelli. In April 2010, he was cast in the live action adaptation of the short and fictitious Grindhouse trailer Hobo With a Shotgun (2011). In March 2011, it was announced that Hauer would play vampire hunter Van Helsing in legendary horror director Dario Argento's Dracula 3D. He also starred as "Niall Brigant" in season 6 of HBO's True Blood.

Hauer is a knight in the Order of the Netherlands Lion since 2013.

Hauer is an environmentalist. He advocated for the release of Sea Shepherd Conservation Society leader Paul Watson, who was convicted in 1994 for sinking a Norwegian whaling vessel. Hauer has also established an AIDS awareness organization called the Rutger Hauer Starfish Association.

In April 2007, he published his autobiography All Those Moments: Stories of Heroes, Villains, Replicants, and Blade Runners (co-written with Patrick Quinlan), in which he discusses many of his movie roles. Proceeds from the book go to the Rutger Hauer Starfish Association.