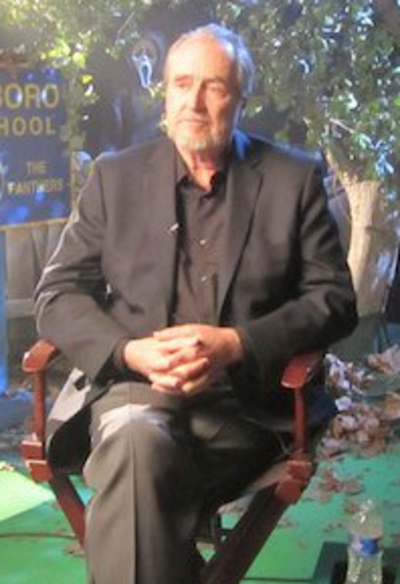 Wesley Earl "Wes" Craven (born August 2, 1939) is an American film director, writer, producer, and actor known for his work on horror films, particularly slasher films. He is the creator of A Nightmare on Elm Street, Wes Craven's New Nightmare, and also co-wrote A Nightmare on Elm Street 3: Dream Warriors with Bruce Wagner, featuring the Freddy Krueger character. Craven also directed the entire Scream series, featuring Ghostface. Some of his other films include, The Hills Have Eyes, The Last House on the Left, The Serpent and the Rainbow, The People Under the Stairs, Vampire in Brooklyn, Music of the Heart, Red Eye, and My Soul to Take.

Craven was born in Cleveland, Ohio, the son of Caroline (née Miller) and Paul Craven. Craven earned an undergraduate degree in English and Psychology from Wheaton College in Illinois and a masters degree in Philosophy and Writing from Johns Hopkins University.

Craven briefly taught English at Westminster College and was a humanities professor at Clarkson College of Technology (now Clarkson University) in Potsdam, New York. His first job in the film industry was as a sound editor for a post-production company in New York City.

Craven left the academic world for the more lucrative role of pornographic film director. In the documentary Inside Deep Throat, Craven says on camera he made "many X-rated films" under pseudonyms, learning his directing craft. While his role in Deep Throat is undisclosed, most of his early known work involved writing, film editing or both. In 1972 Wes Craven directed his first feature film The Last House on the Left.

Craven's works tend to share a common exploration of the nature of reality. A Nightmare on Elm Street, for example, dealt with the consequences of dreams in real life. New Nightmare "brushes against" (but does not quite break) the fourth wall by having actress Heather Langenkamp play herself as she is haunted by the villain of the film in which she once starred. At one point in the film, we see on Wes Craven's word processor a script he has written, which includes the exact conversation he just had with Heather — as if the script was being written as the action unfolded.The Serpent and the Rainbow portrays a man who cannot distinguish between nightmarish visions and reality. In Scream, the characters frequently reference horror films similar to their situations, and at one point Billy Loomis tells his girlfriend that life is just a big movie. This concept was emphasized in the sequels, as copycat stalkers reenact the events of a new film about the Woodsboro killings occurring in Scream. Scream included a scene mentioning the well-known Richard Gere urban legend. Craven stated in interviews that he received calls from agents telling him that if he left that scene in, he would never work again. He directed Scream 4. Craven was also set to direct Beetlejuice but dropped out to co-write and executive produce the third outing for Freddy Krueger.

Craven's first marriage to Bonnie Broecker produced two children, Jonathan Craven (born 1965) and Jessica Craven (born 1968). Jonathan is a writer and director with a few credits to his name. Jessica was a singer/songwriter in the group the Chapin Sisters. The marriage ended in 1970.

In 1982, Craven married Millicent Eleanor Meyer. However, the two divorced. Craven has stated in interviews that the marriage dissolved after he discovered it "was no longer anything but a sham."

In 2004, Craven married Iya Labunka. She frequently works as a producer on Craven's films.