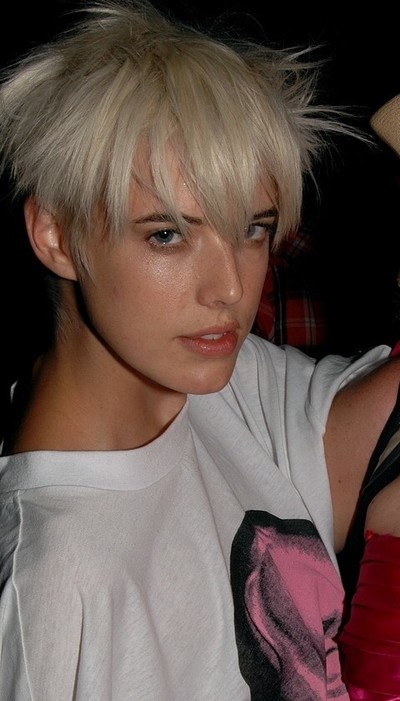 Deyn is from Littleborough, near Rochdale in Greater Manchester. Deyn later moved to Failsworth near Oldham. The second of three children, she moved to Rossendale, Lancashire, and attended All Saints Roman Catholic High School, as well as Bacup and Rawtenstall Grammar School and Sixth Form, Waterfoot.

Deyn's name was apparently coined to further her modelling career after she consulted her mother's friend, a numerology expert, who advised her of the most 'fortuitous' way to spell the name 'Agnes'. It was reported that her mother Lorraine (a nurse), and her sister Emily both changed their surname to Deyn, while Lorraine has changed the I in her first name to Y.

Deyn's working life started at a fish and chip shop in Stubbins, Rossendale, where she was a part-time server at the age of 13. Even at an early age she had an eye for style and by 17 she had already had her head shaved. "I've had short hair since I was 13, and when I was 17, I had a skinhead." In 1999, she won the Rossendale Free Press "Face of '99" competition, aged just 16.

She then moved to London, working in a fast-food restaurant during the day and a bar at night but admits: "It didn’t quite work."

Deyn's biography claims that she was "spotted" while shopping with fashion designer Henry Holland in Kentish Town, London. She then signed with SELECT model management.

In May 2007, she was featured on the cover of American Vogue, alongside Doutzen Kroes, Caroline Trentini, Raquel Zimmermann, Sasha Pivovarova, Jessica Stam, Coco Rocha, Hilary Rhoda, Chanel Iman and Lily Donaldson as "The World's Next Top Models." She has also been featured on the covers of: UK Vogue, the Observer Woman supplement, The Sunday Times Style, Pop, Grazia, Time, Style & Life, Vogue Italia and numerous other international publications.

She has been the face of fragrance The Beat by Burberry, Gold by Giles Deacon at New Look replacing Drew Barrymore, Jean Paul Gaultier's fragrance Ma Dame, Shiseido (replacing Angelina Jolie), Rock Me! by Anna Sui, and childhood friend Henry Holland's label House of Holland. In 2009, Deyn landed a Uniqlo campaign and appeared in a commercial with Gabriel Aubry.

In May 2008, Deyn was guest editor of i-D magazine. The issue was devoted to her and includes articles written by and about Deyn, as well as interviews she conducted with fashion designers such as Vivienne Westwood. Deyn's was on one of the fourteen covers of V magazine autumn issue. Each cover employs a head shot of a famous model, either from new models or established supermodels; it was photographed by Inez van Lamsweerde and Vinoodh Matadin.

In June 2009, the Daily Mirror reported that Deyn had quit modelling to spend more time with her then boyfriend, Singer-songwriter Miles Kane. The newspaper quoted a source as saying that modelling had started to bore Deyn and that she had hired an acting agent to pursue an acting career in British independent films.

Vogue Paris described her as one of the top 30 models of the 2000s.

Deyn appeared in the May 2011 British Vogue editorial, photographed by Tim Walker.

In October 2012, Deyn once again announced that she has retired from modelling in an interview with The Independent. She stated, "I suppose I have stopped modelling officially. I've not done any for a good long while now. I think it was about four years ago when my feelings were changing towards the industry. I didn't hate it, but I was yearning to do something different. I was on a gradient. It was a gradual thing." She intends to focus on her acting career.

Deyn provides vocals for the single "Who" by Five O'Clock Heroes as well as featuring in the video. The single was poorly received by NME, who gave it only a 2/10. The single charted at No. 109 in the UK. Until recently she was a member of the now defunct group Lucky Knitwear. Deyn's voice can be heard at the beginning of Rihanna's music video for "We Found Love".

In the 2010 film Clash of the Titans, Deyn played Aphrodite, Greek goddess of beauty, love, and sex.

In 2012, Deyn starred opposite Richard Coyle in Pusher, an English language remake of Nicolas Winding Refn's Danish film of the same name, where she played Flo, a strong-minded stripper.

On 28 February 2012, Deyn played her first role on the West End stage, as Paula in François Archambault's comedy, The Leisure Society. After receiving excellent reviews for her role in that play, Deyn was cast to play the main female role, Chris Guthrie, in a film adaptation of the Scottish-set novel Sunset Song.

In 2013, Deyn played the lead role in Electricity, a film adaptation of the novel by Ray Robinson, about the journey of a young woman with epilepsy.

In 2015, she starred in fantasy-horror thriller film Patient Zero.

In 2017, Deyn began filming Hard Sun, a pre-apocalyptic crime drama for the BBC at Hanstead Park in Bricket Wood, Hertfordshire.

Deyn was married to American actor Giovanni Ribisi from 2012 to 2015.