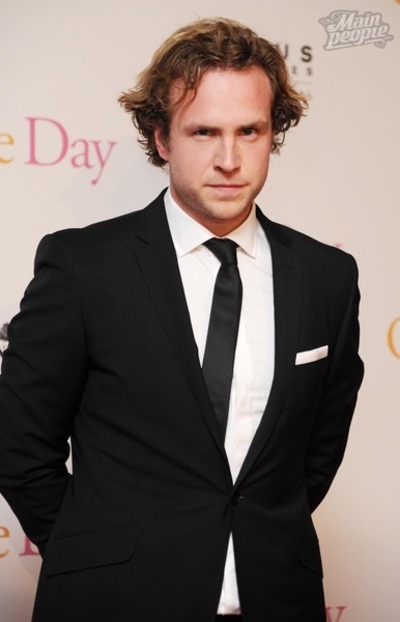 Rafe Joseph Spall (born 10 March 1983) is an English actor. He is best known for his roles in The Shadow Line, Pete versus Life, One Day, Anonymous, Prometheus, Life of Pi, and The Big Short.

Spall was born at King's College Hospital in Camberwell, London, the second of three children of Shane (née Baker) and actor Timothy Spall. Named after the protagonist in The Knight of the Burning Pestle, a role his father played in the Royal Shakespeare Company and one he would later play himself, he always had ambitions to act. Having achieved poor grades at his school, Haberdashers' Aske's Hatcham College, he left to become an actor and joined the National Youth Theatre after failing to get into his chosen drama schools.

Spall has frequently collaborated with Edgar Wright, appearing in his films Shaun of the Dead, Hot Fuzz and The World's End alongside Simon Pegg and Nick Frost. Spall was also featured in Wright's segment in the 2007 Quentin Tarantino and Robert Rodriguez film Grindhouse.

In 2007, he performed for the first time with his father in the ITV adaptation of A Room with a View playing father and son.

In 2012, Spall portrayed Canadian author Yann Martel in the Academy Award-winning drama film Life of Pi, directed by Ang Lee and starring Suraj Sharma and Irrfan Khan. The film was a critical and financial success, winning four Academy Awards and making over $600 million at the box office. In 2013, he played the newlywed husband in I Give It a Year, a comedy about the trials and tribulations of a couple during their first year of marriage.

In 2014, Spall appeared in the coming-of-age drama X+Y, alongside Asa Butterfield and Sally Hawkins, and the seasonal family comedy Get Santa. In 2015, he played John Hancock in the History Channel three-part series, Sons of Liberty, alongside Jim Broadbent, and appeared in the Academy Award-winning biographical comedy-drama The Big Short, alongside Christian Bale, Brad Pitt, Ryan Gosling and Steve Carell. Also that year, Spall played Harry Price in Harry Price: Ghost Hunter, ITV's adaptation of Neil Spring's debut novel, The Ghost Hunters. The film aired on ITV1 on 27 December.

In 2016, Spall was due to portray Eli Mills in the fifth installment of Steven Spielberg's Jurassic Park series, with The Impossible director J. A. Bayona.

Spall says he has always struggled with his weight, going up to 114 kg, but said that he was given so many character parts that he attempted to slim down, losing over 32 kg. Like his father, he is a keen supporter of Crystal Palace. He is a patron of the Actors' Centre.