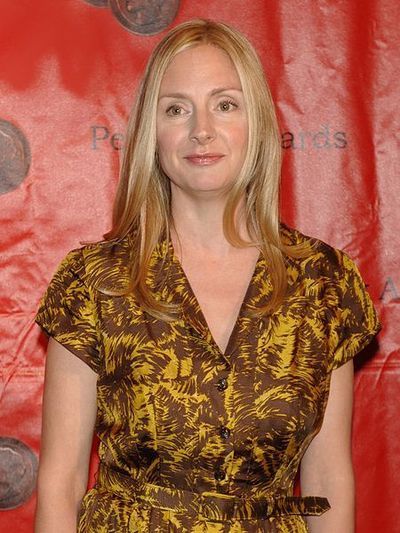 Davis, second of three children, was born in Englewood, New Jersey, the daughter of Joan, a librarian (at one time, for the elementary section of Elisabeth Morrow School), and William Davis, an engineer. Davis has described her mother as a "great storyteller" who would take Davis and her siblings to museums or to "something cultural" every Sunday after church. Davis was raised in Tenafly, New Jersey and graduated in 1982 from Tenafly High School. She was a childhood friend of Mira Sorvino, with whom she wrote and acted in backyard plays.

Davis majored in cognitive science at Vassar College, but then made her debut as a dramatic actress in the 1990 film Flatliners, starring as William Baldwin's fiancée. She then appeared in the hit film Home Alone in a small role as a Parisian airport receptionist. Later, she starred in independent films such as The Daytrippers (1995) and Next Stop Wonderland (1998). These led her to roles in Hollywood films such as the thriller Arlington Road (1999), and About Schmidt (2002). In 2003, she starred opposite Paul Giamatti in the movie adaptation of the Harvey Pekar comic American Splendor as the comic book version of Pekar's real-life wife, Joyce Brabner. For this role, Davis won the New York Film Critics Circle award and was nominated for a Golden Globe for Best Actress in a Supporting Role. In 2009, she was cast as Hillary Rodham Clinton in the BBC / HBO film The Special Relationship, released in 2010. She has received a nomination for Emmy Award for Outstanding Lead Actress – Miniseries or a Movie for her performance as Clinton.

Her major stage debut came after she starred for Joel Schumacher (her "Flatliners" director) in the David Mamet play Speed-the-Plow with William Petersen at the Remains Theater in Chicago in 1992. Later, she had lead roles in the New York premiere of Rebecca Gilman's Spinning into Butter in 2000, and in the 2005 audio play Hope Leaves the Theater, written and directed by Charlie Kaufman. This was a segment of the sound-only production Theater of the New Ear, which debuted at St. Ann's Warehouse in Brooklyn, NY. The title actually refers to Davis's character "leaving the theater."

Davis co-starred as the bitter and self-deprecating Mia with Golden Globe winner Gabriel Byrne in the second season (2009) of HBO's In Treatment, a dramatic series that tracks the backstory and progress of five patients during their series of psychological therapeutic sessions. Mia is a successful, unmarried malpractice attorney who returns to therapy with Dr. Paul Weston after a 20-year absence because of a lack of stability in her personal life.