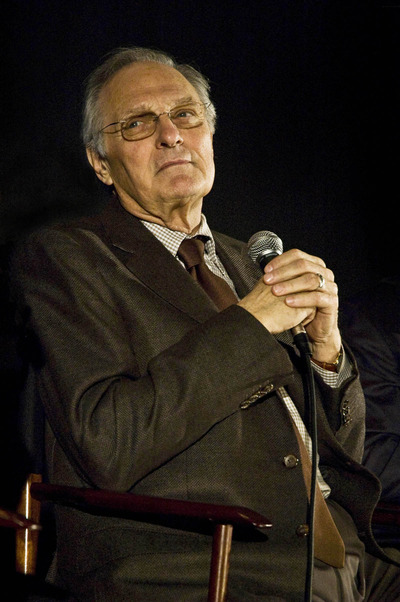 Alan Alda (born Alphonso Joseph D'Abruzzo; January 28, 1936) is an American actor, director, screenwriter, and author. A six-time Emmy Award and Golden Globe Award winner, he is best known for his starring roles as Hawkeye Pierce in the TV series M*A*S*H and Arnold Vinick in The West Wing, and his supporting role in the 2004 film The Aviator, for which he was nominated for an Academy Award. He is currently a Visiting Professor at the State University of New York at Stony Brook School of Journalism and a member of the advisory board of The Center for Communicating Science. He serves on the board of the World Science Festival and is a judge for Math-O-Vision.

Alda was born Alphonso Joseph D'Abruzzo in New York City and had a peripatetic childhood as his parents traveled around the United States in support of his father's job as a performer in burlesque theatres. His father, Robert Alda (born Alphonso Giuseppe Giovanni Roberto D'Abruzzo), was an actor and singer, and his mother, Joan Browne, a former showgirl. His father was of Italian descent and his mother was of Irish ancestry. His adopted surname, "Alda," is a portmanteau of ALphonso and D'Abruzzo. When Alda was seven years old, he contracted poliomyelitis. To combat the disease, his parents administered a painful treatment regimen developed by Sister Elizabeth Kenny that consisted of applying hot woollen blankets to his limbs and stretching his muscles. Alda attended Archbishop Stepinac High School in White Plains, New York. He appears briefly in Don DeLillo's novel Underworld as a high school student in 1951, who wants his friends to stop calling him Alphonso and start calling him Alan, because he's going to be a movie star. In 1956, he received his Bachelor of Arts degree in English from Fordham College of Fordham University in the Bronx, where he was a student staff member of its FM radio station, WFUV. Alda's half-brother, Antony Alda, was born that same year and would also become an actor.

During Alda's junior year, he studied in Paris, acted in a play in Rome, and performed with his father on television in Amsterdam. In college, he was a member of the ROTC, and after graduation, he served for a year at Fort Benning, Georgia, then joined the U.S. Army Reserve, and served for six months.

Alda began his career in the 1950s, as a member of the Compass Players comedy revue. In 1966, he starred in the musical The Apple Tree on Broadway; he was nominated for the Tony Award as Best Actor in a Musical for that role.

Alda made his Hollywood acting debut as a supporting player in Gone are the Days! – a film version of the highly successful Broadway play Purlie Victorious, which co-starred veteran actors Ruby Dee and her husband, Ossie Davis.

In early 1972, Alda auditioned for and was selected to play the role of "Hawkeye Pierce" in the TV adaptation of the 1970 film MASH. He was nominated for 21 Emmy Awards, and won five. He took part in writing 19 episodes, including the finale, and directed 32. When he won his first Emmy Award for writing, he was so happy that he performed a cartwheel before running up to the stage to accept the award. He was also the first person to win Emmy Awards for acting, writing, and directing for the same series.

Alda married Arlene Weiss a year after graduation, with whom he has three daughters: Eve, Elizabeth, and Beatrice. Two of his 7 grandchildren are aspiring actors. The Aldas have been longtime residents of Leonia, New Jersey. Alda frequented Sol & Sol Deli on Palisade Avenue in the nearby town of Englewood, New Jersey—a fact mirrored in his character's daydream about eating whitefish from the establishment, in an episode of M*A*S*H in which Hawkeye sustains a head injury.