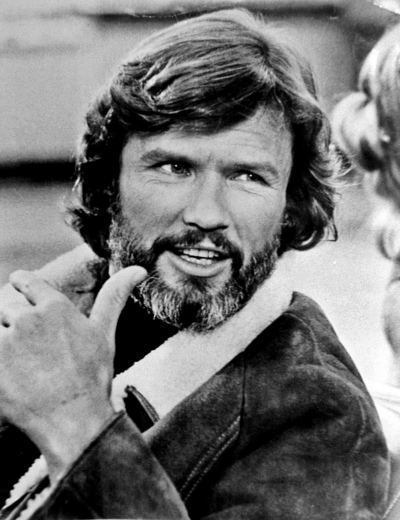 Kristoffer "Kris" Kristofferson (born June 22, 1936) is an American country music singer, songwriter, musician, and film actor. He is known for writing and recording such hits as "Me and Bobby McGee", "For the Good Times", "Sunday Mornin' Comin' Down", and "Help Me Make It Through the Night". Kristofferson is the sole writer of most of his songs, and he has collaborated with various other figures of the Nashville scene such as Shel Silverstein. In 1985, Kristofferson joined fellow country artists Waylon Jennings, Willie Nelson and Johnny Cash in forming the country music supergroup "The Highwaymen". In 2004, Kristofferson was inducted into the Country Music Hall of Fame. He is also known for his acting work, including his role as Earl Hurley in The Motel Life, which he co-starred in opposite Emile Hirsch, Stephen Dorff, and Dakota Fanning.

Kristoffer Kristofferson was born in Brownsville, Texas, to Mary Ann (née Ashbrook) and Lars Henry Kristofferson, a U.S. Army Air Corps officer (later a U.S. Air Force Major General). His paternal grandparents emigrated from Sweden, while his mother had English, Scots-Irish, German, Swiss-German, and Dutch ancestry. Kristofferson's paternal grandfather was an officer in the Swedish Army. When Kristoffer was a child, his father pushed him towards a military career.

Like most "military brats", Kristofferson moved around frequently as a youth, finally settling down in San Mateo, California, where he graduated from San Mateo High School. An aspiring writer, Kristofferson enrolled in Pomona College in 1954. He experienced his first dose of fame when he appeared in Sports Illustrated's "Faces in the Crowd" for his achievements in collegiate rugby union, football, and track and field. He and classmates revived the Claremont Colleges Rugby Club in 1958, which has remained a Southern California rugby dynasty. Kris became a member of Kappa Delta Fraternity at Pomona College, graduating in 1958 with a BA, summa cum laude in Literature. In a 2004 interview with Pomona College Magazine, Kristofferson mentioned philosophy professor Frederick Sontag as an important influence in his life.

Kristofferson earned a Rhodes Scholarship to Oxford University, where he studied at Merton College. While at Oxford, he was awarded his Blue for boxing and began writing songs. With the help of his manager, Larry Parnes, he recorded for Top Rank Records under the name Kris Carson. Parnes was working to sell Kris as "a Yank at Oxford" to the British public; Kris was willing to accept that promotional approach if it helped his singing career, which he hoped would enable him to progress towards his goal of becoming a novelist. This early phase of his music career was unsuccessful.

In 1960, Kristofferson graduated with a BPhil in English literature and married his long-time girlfriend, Fran Beer.

Kris has stated that he was greatly influenced by the poet William Blakewhile at Oxford, who had proclaimed that if one has a God-given creative talent then one should use it or else reap sorrow and despair. Kristofferson sent some of his compositions to a friend's relative, Marijohn Wilkin, a successful Nashville, Tennessee, songwriter, but when he arrived in the town to see Sam Phillips of Sun Records his shoes were, according to Philips, "falling off his feet."

Kris, under pressure from his family, ultimately joined the U.S. Army and achieved the rank of Captain. He became a helicopter pilot after receiving flight training at Fort Rucker, Alabama. He also completed Ranger School. During the early 1960s, he was stationed in West Germany as a member of the 8th Infantry Division. It was during this time that he resumed his music career and formed a band. In 1965, when his tour of duty ended, Kristofferson was given an assignment to teach English Literature at West Point. Instead, he decided to leave the Army and pursue songwriting. His family disowned him because of this decision and they never reconciled with him. They saw it as a rejection of everything they stood for, in spite of the fact that Kristofferson has said he is proud of his time in the military, and received the AVA (American Veterans Awards) "Veteran of the Year Award" in 2003.

After leaving the Army in 1965, Kristofferson moved to Nashville. He worked at a variety of odd jobs while struggling for success in music, burdened with medical expenses resulting from his son's defective esophagus. He and his wife soon divorced.

He got a job sweeping floors at Columbia Studios in Nashville. There he met Johnny Cash, who initially accepted some of Kristofferson's songs, but chose not to use them. During Kristofferson's janitorial stint for Columbia, Bob Dylan recorded his landmark 1966 album Blonde on Blonde at the studio. Although he had the opportunity to watch some of Dylan's recording sessions, Kristofferson never met Dylan out of fear that he would be fired for approaching him.

He also worked as a commercial helicopter pilot at that time for a south Louisiana firm called Petroleum Helicopters International (PHI), based in Lafayette, Louisiana. Kristofferson recalled of his days as a pilot, "That was about the last three years before I started performing, before people started cutting my songs ... I would work a week down here [in south Louisiana] for PHI, sitting on an oil platform and flying helicopters. Then I'd go back to Nashville at the end of the week and spend a week up there trying to pitch the songs, then come back down and write songs for another week ... I can remember 'Help Me Make It Through The Night' I wrote sitting on top of an oil platform. I wrote 'Bobby McGee' down here, and a lot of them [in south Louisiana]."

In 1966, Dave Dudley released a successful Kristofferson single, "Viet Nam Blues". In 1967, Kristofferson signed to Epic Records and released a single, "Golden Idol"/"Killing Time", but the song was not successful. Within the next few years, more Kristofferson originals hit the charts, performed by Roy Drusky ("Jody and the Kid"); Billy Walker & the Tennessee Walkers ("From the Bottle to the Bottom"); Ray Stevens ("Sunday Mornin' Comin' Down"); Jerry Lee Lewis ("Once More with Feeling"); Faron Young ("Your Time's Comin'"); and Roger Miller ("Me and Bobby McGee", "Best of all Possible Worlds", "Darby's Castle"). He achieved some success as a performer himself, following Johnny Cash's introduction of Kristofferson at the Newport Folk Festival. Kristofferson had previously grabbed Cash's attention when he landed his helicopter in Cash's yard without prior arrangement and gave him some tapes.

Kristofferson signed to Monument Records as a recording artist. In addition to running that label,Fred Foster also served as manager of Combine Music, Kristofferson's songwriting label. His debut album for Monument in 1970 was Kristofferson, which included a few new songs as well as many of his previous hits. Sales were poor, although this debut album would become a success the following year when it was re-released under the title Me & Bobby McGee. Kristofferson's compositions were still in high demand. Ray Price ("For the Good Times"), Waylon Jennings("The Taker"), Bobby Bare ("Come Sundown"), Johnny Cash ("Sunday Morning Coming Down") and Sammi Smith ("Help Me Make It Through the Night") all recorded successful versions of his songs in the early 1970s. "For the Good Times" (Ray Price) won "Song of the Year" in 1970 from the Academy of Country Music, while "Sunday Morning Coming Down" (Johnny Cash) won the same award from the Academy's rival, the Country Music Association in the same year. This is the only time an individual received the same award from these two organizations in the same year for different songs.

For the next few years, Kristofferson focused on acting. He appeared in Blume in Love (directed by Paul Mazursky) and Pat Garrett and Billy the Kid (directed by Sam Peckinpah). He continued acting, in Sam Peckinpah's Bring Me the Head of Alfredo Garcia, Convoy, (another Sam Peckinpah film which was released in 1978), Alice Doesn't Live Here Anymore, Vigilante Force, a film based on the Yukio Mishima novel The Sailor Who Fell from Grace with the Sea, and A Star Is Born (with Barbra Streisand), for which he received a Golden Globe Award for Best Actor (and which he noted had been an experience "worse than boot camp") and Flashpoint in 1984 (directed by William Tannen). At the peak of his box-office power, Kristofferson turned down both William Friedkin's Sorcerer (1977), the romantic war film Hanover Street and the first Rambo-installment, First Blood. In spite of his success with Streisand, Kristofferson's solo musical career headed downward with his non-charting ninth album, Shake Hands with the Devil. His next film Freedom Road did not earn a theatrical release in the U.S. Kristofferson's next film was Heaven's Gate. Despite being a phenomenal industry-changing failure at the time, the film gained critical recognition in subsequent years. In 1986, he starred in The Last Days of Frank and Jesse James with Johnny Cash. In 1989, he was the male lead in the film Millennium with Cheryl Ladd. He earned a supporting role as Charlie Wade, a corrupt South Texas sheriff in John Sayles' Lone Star, a film nominated for an Oscar for Best Screenplay. In 1998, he took a role in the film Blade, playing alongside Wesley Snipes as Blade's mentor Abraham Whistler. He reprised the role in Blade II (2002) and again in Blade: Trinity (2004).

Kristofferson has been married three times and has eight children. In 1960, Kristofferson married his high-school sweetheart Frances (Fran) Beer. They had two children, a daughter, Tracy, and a son, Kris, before divorcing in 1969. Afterwards, Kristofferson dated Janis Joplin, not long before her death, before dating Barbra Streisand. In a 1983 "Rolling Stone" interview, Joan Baez said that she and Kristofferson had had a brief fling somewhere around 1970–71.

In 1973, he married singer Rita Coolidge and together they had one child, Casey Kristofferson. They divorced in 1980.

Kristofferson wrote a portion of the I'll Be Here in the Morning: The Songwriting Legacy of Townes Van Zandt book. Kristofferson had said that he would like the first three lines of Leonard Cohen's "Bird on the Wire" on his tombstone: