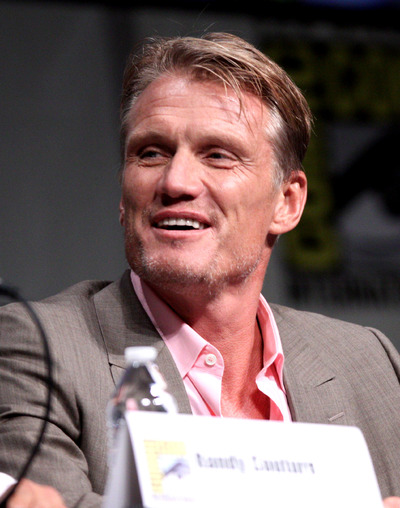 A graduate in chemistry from Washington State University, chemical engineering from the Royal Institute of Technology in Stockholm and the University of Sydney in Sydney, Australia in 1982, Lundgren holds a rank of 3rd dan black belt in Kyokushin Karate and was European champion in 1980 and 1981. While in Sydney, he became a bodyguard for Jamaican singer Grace Jones and began a relationship with her. They moved together to New York City, where after a short stint as a model and bouncer at the Manhattan nightclub The Limelight, Jones got him a small debut role in the James Bond film A View to a Kill as a KGB henchman.

Lundgren's breakthrough came when he starred in Rocky IV in 1985 as the imposing Russian boxer Ivan Drago. Since then, he has starred in more than 40 movies, almost all of them in the action genre. He portrayed He-Man in the 1987 film Masters of the Universe, and Frank Castle in the 1989 film The Punisher. In the early 1990s, he also appeared in films such as Showdown in Little Tokyo (1991), alongside Brandon Lee; Universal Soldier (1992), opposite Jean-Claude Van Damme; Joshua Tree (1993), opposite Kristian Alfonso and George Segal; Johnny Mnemonic (1995), opposite Keanu Reeves and Ice-T; and Blackjack (1998), directed by John Woo. In 2004, Lundgren directed his first picture, The Defender, and subsequently helmed The Mechanik (2005), Missionary Man (2007), Command Performance (2009), and Icarus (2010), in which he also starred. After a long spell performing in direct-to-video films, 2010 marked his return to theatres with The Expendables, an on-screen reunion with Stallone, alongside an all-action star cast which included, among others, Jason Statham, Jet Li, Stone Cold Steve Austin, and Mickey Rourke. He reprised his role as Gunner Jensen in The Expendables 2 in 2012.

Known for his stature and fitness, at peak, Lundgren stood around 195 centimetres (6 ft 5 in) and weighed 250 pounds (110 kg), and continues to be an influence in the world of fitness and bodybuilding.

Lundgren was born in Stockholm, Sweden, in 1957, into an academic, middle-class family in the suburb of Spånga. Some sources wrongly state 1959 as his year of birth, but Lundgren himself has confirmed it to be 1957. His mother, Sigrid Birgitta (née Tjerneld), was a language teacher, and his father, Karl Johan Hugo Lundgren, was an engineer and economist for the Swedish government. He has two sisters and a younger brother. Lundgren was raised in the Lutheran church. Lundgren has said that his father was physically abusive and vented his frustration on his wife and eldest son. He has stated that, during his tirades, his father would call him a "loser", which motivated him later as he grew more ambitious to prove himself. He has said, 'I still love my father, no matter what happened. There are many things about him I still admire. As a child, I was probably too much like him, very stubborn—perhaps that's what he couldn't deal with." He cites his troubled relationship with his father as the reason he developed a desire to participate in heavy contact sports such as boxing and karate.

Dolph has said that, as a child, he was insecure and suffered from allergies, and even claimed to be a runt. As a teenager, he grew up with his grandparents in the community of Nyland, north of Kramfors. He showed a keen interest in drumming and had aspirations to become a rock star. In his teenage years, he also tried judo, Gōjū-ryū and took up Kyokushin karate and began training heavily with weights. Lundgren is also a keen soccer fan and supports Everton F.C. when he is in Europe, but has developed more of an interest in international soccer tournaments such as the European Championships and the FIFA World Cup since he moved to Los Angeles.

After graduating from high school with straight As, he spent some time in the United States in the late 1970s on various academic scholarships, studying chemistry at Washington State University and Clemson University. Lundgren says that "my dad always told me that if I wanted to make something special with my life, I had to go to America." After serving his mandatory two years in the Swedish Marine Corps at the Amphibious Ranger School, he enrolled at the Royal Institute of Technology in Stockholm and graduated with a degree in chemical engineering.

Amidst his years of studying, Lundgren honed his karate skills by training hard in the dojo for five years, attaining the rank of 2nd dan black belt in Kyokushin in 1978. He captained the Swedish Kyokushin karate team, and was a formidable challenger at the 1979 World Open Tournament (arranged by the Kyokushin Karate Organization) when he was only a green belt. He won the European championships in 1980 and 1981, and a heavyweight tournament in Australia in 1982. Dolph continued training kyokushin karate after leaving his tournament career, when his new career allowed, and eventually graded to 3rd Dan in July 1998, in the Shinkyokushin organization of Kyokushin karate. The formal grading took place in Stockholms kyokushin karate Gym, in Stockholm, Sweden. Lundgren is often seen on Shinkyokush in tournament events, doing karate exhibitions during breaks.

In 1982, Lundgren graduated with a master's degree in chemical engineering from the University of Sydney, finishing with the highest results in his class. During his time in Sydney, he earned a living as a bouncer in a nightclub at the infamous King's Cross. He was awarded a Fulbright Scholarship to the Massachusetts Institute of Technology in 1983. However, while preparing for the move to Boston, he was spotted in the nightclub he worked at in Sydney and was hired by Grace Jones as a bodyguard. He fell in love with Jones and their relationship developed dramatically, moving with her to New York City.

While living with Grace Jones in her New York City apartment, Lundgren dabbled in modeling at the Zoli Agency but was described as "a bit too tall and muscular for a model's size 40". He earned a living as a bouncer at the Manhattan nightclub The Limelight; housed in a former Episcopal Church of the Holy Communion, working with Chazz Palminteri. In the daytime, Lundgren commenced studying drama at the Warren Robertson Theatre Workshop and has said that "my time in New York City opened up my adolescent Swedish eyes to a multitude of different people and lifestyles, mostly in the arts. I hung out with Andy Warhol, Keith Haring, Iman and Steve Rubell, danced at Studio 54, and studied acting with Andie MacDowell and Tom Hulce." Because of his height of 6 feet 5 (195 cm), muscular frame and distinctive looks, he stood out, and was encouraged by friends that he could make it in movies. He would later quit studying at the Massachusetts Institute of Technology after two weeks to pursue acting.

On set of the James Bond film A View to a Kill, Jones suggested that he try out for a part in film which led to his feature film debut playing the very minor role of a suited KGB henchman named Venz. In the film, Dolph is seen briefly in the scene in which the KGB's General Gogol (Walter Gotell) confronts Max Zorin (Christopher Walken) about leaving the KGB at a racing ground and ends in a minor brawl in which Lundgren's character Venz points a gun at Zorin. Roger Moore, in his last performance as James Bond, once memorably said "Dolph is larger than Denmark".

Lundgren found the entertainment business more attractive and rewarding than chemical engineering so he decided to pursue a career in acting despite having no formal training. Upon learning that Sylvester Stallone was on the lookout for an imposing fighter to play Ivan Drago in Rocky IV (1985), Lundgren sent off videos and pictures of himself to a distant contact of Stallone, which eventually got through to him. Lundgren tried out for the role, but as he stated himself, he was initially turned down for the role because he was too tall. However, he eventually beat 5,000 other hopefuls to land his breakout role opposite Stallone, Carl Weathers and Brigitte Nielsen. In order to improve his physique and athletic abilities for the role of Drago, he trained intensely in bodybuilding and boxing for five months before the film was shot. Lundgren said, "We trained six days a week—weights in the morning for about an hour, then boxing in the afternoon. We did a split of chest and back one day and then shoulders, legs, and arms the next. We boxed for an hour and a half, practiced the fight choreography, and did bag work and abs." He weighed 235 pounds (107 kg) – 245 pounds (111 kg) during the filming, but in the film he was billed at 261 pounds (118 kg); one publisher said of Drago, "He's a hulking 261 pounds of merciless fighting machine, the best that Soviet science & medicine can create". His lines "If he dies, he dies" and "I must break you" are amongst the best known of the Rocky series and have been cited in popular culture.

During the 1980s, Lundgren had relationships with Jamaican singer Grace Jones and model Paula Barbieri. In 1994 he married Anette Qviberg, a jewelry designer and fashion stylist in Marbella. The couple decided they liked the place so much that over the years they rented out accommodation there before eventually buying a family home. They have two daughters: Ida Sigrid Lundgren (born 29 April 1996) and Greta Eveline Lundgren (born November 2001), both born in Stockholm. The girls attend a British School; Lundgren and Qviberg have cited the reason for living away from Hollywood is that they want to give their children as normal a childhood as possible. In early May 2009, Lundgren's Marbella home was reportedly broken into by three masked burglars who tied up and threatened Qviberg, but fled when they spotted a family photo and realized that the house was owned by Lundgren. Dolph later stated that he believed the intruders to be from Eastern Europe and had contacts in Bulgaria investigating them, but to no avail; the intruders are still at large. As of 2011, the Lundgrens are divorced. Dolph has moved back to Los Angeles with his new girlfriend Jenny Sandersson.