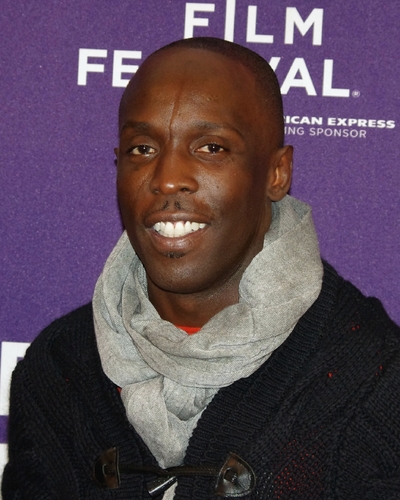 Michael Kenneth Williams (born November 22, 1966) is an American actor best known for his portrayal of Omar Little on the HBO drama series The Wire, and of Albert "Chalky" White on HBO's Boardwalk Empire.

Williams was born in Brooklyn, New York.Williams first got his big break into the movies when rapper and actor Tupac Shakur had seen his picture, discovering Williams and had him cast to play the role of his little brother in the 1996 movie Bullet starring Tupac Shakur and Mickey Rourke. After getting in some trouble as a youth, he enrolled at the National Black Theatre in New York City. He later got a job at a pharmaceutical company. Inspired by Janet Jackson's Rhythm Nation 1814, he left school and quit his job, against the wishes of his family, to pursue a career as a dancer. During a year in which he was intermittently homeless, Williams visited record labels and dance studios looking for work. He got a job as a background dancer on a music tour for Kym Sims' dance anthem Too Blind To See It, which led to more work appearing as a dancer in videos and on tours, such as with George Michael, Madonna, as well as some modeling work. He also choreographed Crystal Waters' 1994 single 100% Pure Love.

Williams is well known for his large facial scar, which he received during a bar fight at age 25. The scar led to his being offered roles as a thug in music videos. He eventually embraced the scar, citing Seal's scarred face as an inspiration. His scar became his signature and earned him photo shoots with noted photographers like David LaChapelle.

For his portrayal of Omar, Williams was named by USA Today as one of ten reasons they still love television. The character was praised for his uniqueness in the stale landscape of TV crime dramas and for the wit and humor that Williams brings to the portrayal. Omar has been named as one of the first season's richest characters, a Robin Hood of Baltimore's west side projects. The Baltimore City Paper named the character one of their top ten reasons not to cancel the show and called him "arguably the show’s single greatest achievement". In 2007 he was nominated for an NAACP Image Award for Outstanding Actor in a Drama Series for his role as Omar.