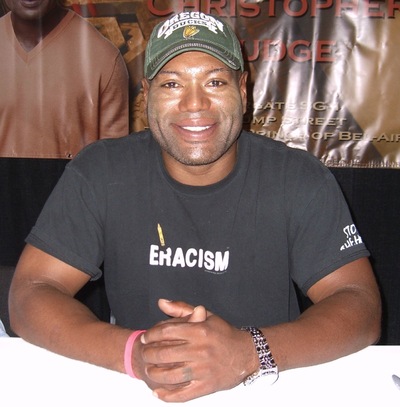 Douglas Christopher Judge (born October 13, 1964) is an American actor best known for playing Teal'c in the Canadian-American military science fiction television series Stargate SG-1. He attended the University of Oregon on a football scholarship and was a Pacific-10 Conference player.

Christopher Judge was born and raised in Los Angeles, California. He has one younger brother, Jeff Judge, also an actor. Judge harbored the desire to become an actor at an early age, studying drama in high school. "The television set was my babysitter growing up. I can remember wanting to invoke the feelings that I was getting from television—I wanted to be the one who was the catalyst for those feelings in other people. Performing was something I've always known I was going to do." He always knew that sports would be a stepping stone to an acting career. Judge was an All-L.A. City football player at Carson High School and graduated from Carson in 1982. He played for legendary Coach Gene Vollnogle.

Judge received a scholarship from the University of Oregon and played defensive back and safety for the Ducks from 1982 to 1985. He led in kickoff return yardage for 1983-84 and interceptions in 1984, and earned the Casanova Award in 1982, given to the freshman or newcomer of the year. While at Oregon, Judge was a three time All American, a Pacific-10 Conference Selection in 1984 and played in the 1985 Hula Bowl.

Judge initially considered majoring in pre-med, in the event that his acting aspirations were not successful, but he found he had trouble with the required math, and changed his major, first to psychology, and then to telecommunications and film with a minor in psychology.

Judge won a contest to host a radio show in Oregon, and in his senior year he won a regional contest to host the West Coast FOX KLSR Morning Show, an "MTV talk show type thing"; he used this experience to get an agent and move to Los Angeles.

In 1989 Judge began studying at the Howard Fine Studio in LA. A few of his early roles were in the 1990s Bird on a Wire, Cadence, Neon Rider and MacGyver with future Stargate SG-1 star Richard Dean Anderson. In the ensuing years, Judge had small parts in various television shows and movies such as 21 Jump Street (with future SG-1 director Peter DeLuise), The Fresh Prince of Bel-Air, and House Party 2, and as a regular on Sirens from 1994 to 1995.

Judge's largest role came in 1997 with Stargate SG-1. While at a friend's house, he saw his friend's roommate practicing for an audition and was intrigued. While the roommate was away, Judge looked at the audition notes, then called his agent and insisted he get him an audition, or lose him as a client. At the audition there were three sets of actors for each of the principal roles, but eight or ten for the role of Teal'c. Judge was confident he got the part when they dismissed everyone who read for the part except him. Out of all the actors in Stargate SG-1, Judge has been in the most episodes.

Judge is involved with the Boys & Girls Clubs of Canada. He is an avid golfer. Judge has four children, Cameron Justin, Catrina Christine, Christopher Jordan and Chloe (born 2005). He married model/actress Gianna Patton on December 28, 2011.