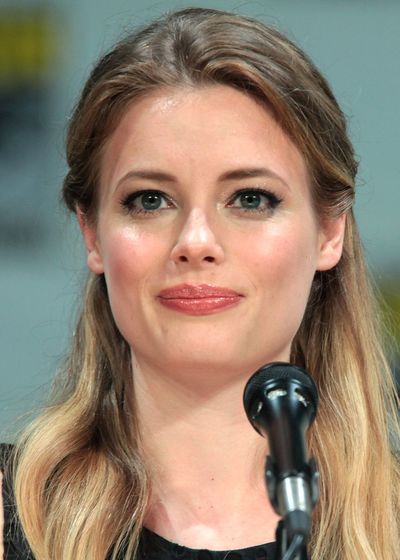 Gillian MacLaren Jacobs (born October 19, 1982) is an American actress. She is known for portraying Britta Perry on the NBC/Yahoo! Screen comedy series Community and stars as Mickey on the Netflix series Love. Jacobs has also had a recurring role on the HBO series Girls and has appeared in films such as Gardens of the Night (2008), The Lookalike (2014) and Don't Think Twice (2016).

Jacobs was born in Pittsburgh, Pennsylvania. Her mother, Martina Magenau Jacobs, is the director of alumni relations at Carnegie Mellon University's Heinz College. Her father, William F. Jacobs Jr., was an investment banker. She was raised in Mt. Lebanon, Pennsylvania. She is of French, German, Irish, and Scottish descent. Her family owned the Jackson Koehler Eagle Brewery, established in 1847 in Erie, Pennsylvania, where her grandfather, John Martin Magenau Jr., served as President and CEO until its closure in 1978.

Jacobs began studying acting at the age of eight, and attended acting classes on Saturdays at the Pittsburgh Playhouse while growing up. She performed with the Pittsburgh Public Theater, where she was a perennial contender in the Public's Shakespeare Monologue Contest, leading her to be cast as Titania in its production of A Midsummer Night's Dream.

After graduating from Mt. Lebanon High School in 2000, Jacobs moved to New York City to attend the Juilliard School, where she was a member of the Drama Division's Group 33. She graduated with a Bachelor of Fine Arts in 2004.

Jacobs' first acting role came as Adele Congreve on the television series The Book of Daniel. Although she played Kim in the pilot of Traveler, the role was given to Pascale Hutton when ABC acquired the series. Jacobs subsequently made guest appearances on Fringe and Law & Order: Criminal Intent. In 2006, she starred in an Off-Off-Broadway production of Chris Denham's cagelove. While overall critical reaction to the play was negative, Jacobs earned praise in several reviews. The New York Times advised readers to "remember the name of Gillian Jacobs, a stunning Juilliard graduate who has the glow of a star in the making".

Jacobs has appeared in theatrical productions such as The Fabulous Life of a Size Zero (2007), A Feminine Ending (2007), and The Little Flower of East Orange (2008). Her film work includes Blackbird (2007), Choke (2008), Gardens of the Night (2008), and The Box (2009). In March 2009, Jacobs joined the cast of the NBC single-camera comedy series Community as Britta Perry, a high school dropout who aspires to become a psychologist. Community was canceled by NBC on May 9, 2014, and later that month, it was reported that Jacobs had landed a recurring role as Mimi-Rose Howard in the fourth season of the HBO series Girls.

In June 2014, Yahoo! Screen picked up Community for a sixth season. It was announced on September 16, 2014 that Jacobs had been cast to star as Mickey in the Netflix original comedy series Love, which premiered in 2016.

In January 2015, the documentary The Queen of Code about computer scientist and United States Navy rear admiral Grace Hopper was directed by Jacobs. Also in 2015 she co-starred in the thriller film Visions with Jim Parsons, Isla Fisher and Anson Mount.

Jacobs is a teetotaler. She is a fan of professional wrestling and is a regular at Pro Wrestling Guerrilla shows.