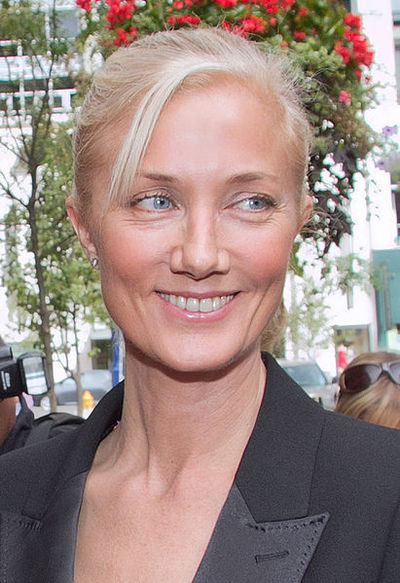 Joely Kim Richardson (born 9 January 1965) is an English actress, known for her role as Queen Catherine Parr in the Showtime television show The Tudors and Julia McNamara in the television drama Nip/Tuck. She also appeared in films such as 101 Dalmatians (1996), Event Horizon (1997), The Patriot (2000), Anonymous (2011), and the Hollywood film adaptation The Girl with the Dragon Tattoo (2011).

Richardson was born in London to a theatrical family, the daughter of actress Vanessa Redgrave and director Tony Richardson, and the granddaughter of actors Sir Michael Redgrave and Rachel Kempson, Lady Redgrave. She is the sister of the late actress Natasha Richardson (1963–2009), and through her, she is the sister-in-law of actor Liam Neeson, and the aunt of Micheál and Daniel Neeson. She was the niece of the late Lynn Redgrave and the late Corin Redgrave and cousin of actress Jemma Redgrave, who is just five days younger than Richardson. Joely Richardson appeared as an extra at the age of three in the 1968 version of The Charge of the Light Brigade, directed by her father.

Richardson and her sister Natasha's early education began in London at the independent St Paul's Girls' School in Hammersmith. At age 14 Richardson moved to boarding school at the independent Harry Hopman Tennis School in Tampa, Florida. In 1983, she graduated from the Thacher School in Ojai, California, then returned to London to study at Royal Academy of Dramatic Art.

Possessing an early ambition to become a professional tennis player, she spent two years at a tennis academy in Florida. Richardson then turned to acting. In 1985, she portrayed, by flashbacks, the younger version of the leading character played by her mother in the film Wetherby. After a leading role in Peter Greenaway's cult success Drowning by Numbers (1988), her first major role in front of a mass audience was as Joanna Farley in a 1989 television episode of Poirot, based on Agatha Christie's detective series. In a 1989 episode of Jim Henson's The Storyteller, she was cast as a princess. She portrayed a teacher on the verge of a nervous breakdown in the 1989 Channel 4 serial Behaving Badly and fictional Finnish Princess Anna (with "a voice like a tuba") in the 1991 screen comedy King Ralph.

A year later she appeared in Shining Through alongside her future brother-in-law, Liam Neeson, when both played Nazis.

In 1993, Richardson appeared in BBC's Lady Chatterley opposite Sean Bean. In 1996, she played fashion designer Anita Campbell-Green in the Disney live-action remake of the animated 101 Dalmatians opposite Glenn Close as Cruella de Vil. In 1998, in the popular television drama The Echo, she played Amanda Powell. The next year, she played in the science fiction/horror film Event Horizon as Lieutenant Starck, executive officer of the research and rescue ship Lewis and Clark, sent to rescue crew of the long-lost experimental ship Event Horizon.

One year later, Richardson appeared opposite Mel Gibson in the film The Patriot, an American film based on the American Revolution. Later that year, she was modelling a necklace, when director Charles Shyer noticed her resemblance to doomed 18th century French Queen Marie Antoinette. Thus, she secured the role of that queen in the 2001 film The Affair of the Necklace. Also in 2000, she appeared opposite Hugh Laurie in Maybe Baby, Ben Elton's film adaptation of his book Inconceivable.

In 2003, Richardson took on the role of Julia McNamara in the television drama Nip/Tuck, based on the lives of two plastic surgeons in Miami. Her mother, Vanessa Redgrave, has appeared in several episodes, playing her character's mother. In November 2006, it was announced that Richardson would be leaving Nip/Tuck to take care of her sick daughter. She last appeared on the show on 14 November, although creator/writer Ryan Murphy wrote alternate season finale episodes, in case Richardson decided to return. Soon after the season finale, it was announced that Richardson would return for the fifth season of Nip/Tuck, though her role may be limited. In June 2007 it was announced that she would return for 15 of the 22 episodes during the fifth season. 2015 co-starred along Arnold Schwarzenegger in the Zombie thriller film Maggie.

Richardson had a much publicised affair with Archie Stirling. She also dated television presenter and actor Jamie Theakston; their relationship ended in 2001. Richardson was also linked to her Nip/Tuck co-star John Hensley.

Richardson is divorced from film producer Tim Bevan. The couple have a daughter, Daisy Bevan (b. 1992), who is also an actress.