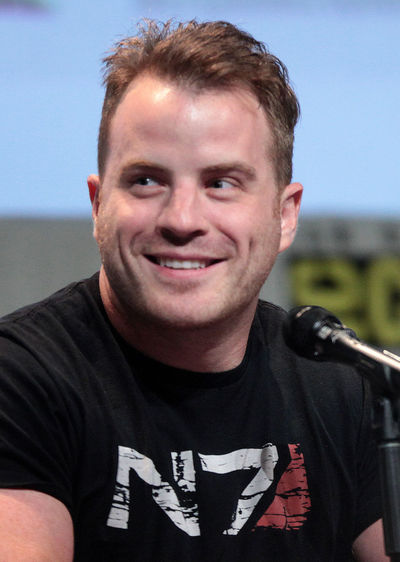 Robert Kazinsky (born Robert John Appleby; 18 November 1983) is a British film, stage and television actor and model. He is best known for his appearances as Casper Rose in the Sky One drama Dream Team, Sean Slater in the BBC One soap opera EastEnders, Chuck Hansen in Guillermo Del Toro's film Pacific Rim and Macklyn Warlow in the sixth season of HBO's True Blood in 2013. He will play the orc warchief Orgrim Doomhammer in Warcraft in 2016. In 2016 he played the lead role in the U.S. Fox TV series Second Chance.

Kazinsky was born in Haywards Heath, the son of Phyllis and Paul Appleby, and grew up in Brighton. He has an older brother, Michael. Kazinsky is Jewish—his parents are descended from immigrants from Poland and Russia. He is a fluent speaker of Hebrew. Kazinsky was educated at Hove Park School in Hove, from 1995 to 2000. Kazinsky was expelled from both Hove Park School and later, his college. He appeared in their productions of Bugsy Malone and A Midsummer Night's Dream. Kazinsky trained as an actor at the Guildford School of Acting from September 2002 to July 2005. He took his grandfather's middle name as his stage name.

He has appeared in Israeli television commercials. He made his acting debut in 2005 when he had a guest role in an episode of the CBBC children's show The Basil Brush Show, playing a character named Sven Garley. He then got a role in Sky One's football drama Dream Team where he played Casper Rose from late 2005 until 2006, when he was killed off towards the end of the ninth series after Kazinsky announced his intention to leave.

It was announced on 18 May 2006 that he would be playing Sean Slater in EastEnders, and he made his first appearance on 22 August 2006 and his last appearance on 1 January 2009.

On 27 March 2007, Kazinsky was suspended from work on EastEnders for two months. A story in The People newspaper alleged that Kazinsky had bombarded a model with "obscene text messages and photographs." Kazinsky issued a statement apologising "for any offence caused and for bringing the show into disrepute".

It was announced on 18 January 2008 that Kazinsky would leave EastEnders. Speaking to This Morning on 31 July 2008, Kazinsky confirmed that he would not be pursuing a career in Hollywood but would instead begin an apprenticeship as a mechanic when he leaves EastEnders.

George Lucas offered him a part in his new Second World War fighter film Red Tails where Kazinsky plays a "pilot who has to adapt to being among African-American comrades."

On YouTube, Kazinsky was featured as the presenter in the EastEnders launch video when they launched their own video channel on the website.

On 22 October 2010, it was announced that Kazinsky had been cast in the upcoming film The Hobbit. He would have played Fili, a member of the Company of Dwarves, but in April 2011, Kazinsky resigned from the role due to personal reasons.

On 9 January 2011 he guest starred in the US television drama Brothers & Sisters as Dr Rick Appleton.

On 13 November 2012 it was announced he would join the cast of the sixth season of the US television fantasy drama True Blood in 2013. In 2013, Kazinsky appeared in the Guillermo del Toro film Pacific Rim, as Chuck Hansen, an Australian Jaeger pilot. On 4 December 2013, Legendary Pictures announced that Kazinsky would be joining the cast of Warcraft film adaptation, set to be released in March 2016.

In March 2015 he earned the leading role in the U.S. Fox drama series Second Chance. His character, James "Jimmy" Pritchard, was a murdered elderly ex-cop who is genetically brought back to life as a man in his mid-30s with unusual powers. The series debuted in early 2016 to somewhat disappointing ratings and, as of February 2016, airs on Friday evenings following another Fox sci-fi series, Sleepy Hollow. He is also set to portray Orgrim Doomhammer, in the film adaption of Warcraft and portrayed Guy in the Science Fiction Siren.