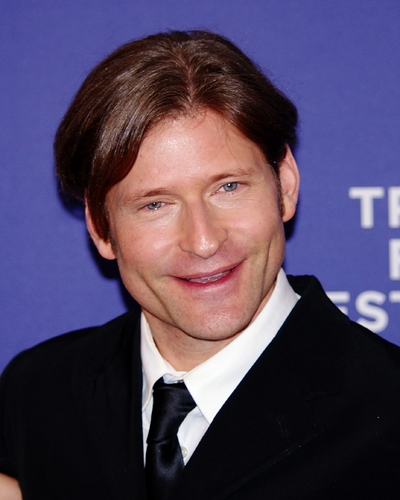 Crispin Hellion Glover (born April 20, 1964) is an American film actor, director and screenwriter, recording artist, publisher, and author. Glover is known for portraying eccentric people on screen such as George McFly in Back to the Future, Layne in River's Edge, unfriendly recluse Rubin Farr in Rubin and Ed, Andy Warhol in The Doors, the "Thin Man" in the big screen adaptation of Charlie's Angels and its sequel, Willard Stiles in the Willard remake, The Knave of Hearts in Alice in Wonderland, and as Phil in Hot Tub Time Machine, and as a Willy Wonka parody in Epic Movie. He is also the voice of Fifi in the Open Season franchise and most recently has appeared in the screen adaption of the Elmore Leonard novel "Freaky Deaky".

In the late 1980s, Glover started his company, Volcanic Eruptions, which publishes his books and also serves as the production company for Glover's films, What Is It? and It is Fine. Everything is Fine! Glover tours with his movies and is currently having sets built for his next productions at property he owns in the Czech Republic.

Glover, an only child, born and raised in New York City, and moved to Los Angeles with his family at the age of five. His father is actor Bruce Glover and his mother, Mary Elizabeth Lillian Betty Krachey (née) Bloom Koerber, was an actress and dancer who retired upon his birth. He was named after the Saint Crispin's Day speech from William Shakespeare's playHenry V, which his parents enjoyed. "Hellion", his real middle name, had earlier been used as a false middle name by his father, who did not like his own real middle name, Herbert. His father is of English, Czech, and Swedish descent, and his mother is of German and English ancestry. As a child, Glover attended The Mirman School from grade one through nine. He then attended both Venice High for grade ten and eleven, and Beverly Hills High School only for grade twelve; he graduated in 1982.

Glover began acting professionally at the age of 13. He appeared in several sitcoms as a teenager, including Happy Days and Family Ties. His first film role was in 1983's My Tutor. That led to roles in Teachers (1984) and Friday the 13th: The Final Chapter (1984). He then worked with director Trent Harris on the third chapter of the Beaver Trilogy, entitled The Orkly Kid. In this short film, he portrayed a small town man who organizes a local talent show to showcase his obsession with Olivia Newton-John, much to the embarrassment of the local community. At the climax of the film, Glover does his rendition, in full drag, of Newton-John's "Please Don't Keep Me Waiting" from her 1979 album Totally Hot.

His breakout role was as George McFly in Robert Zemeckis's Back to the Future, an international box office success in 1985.