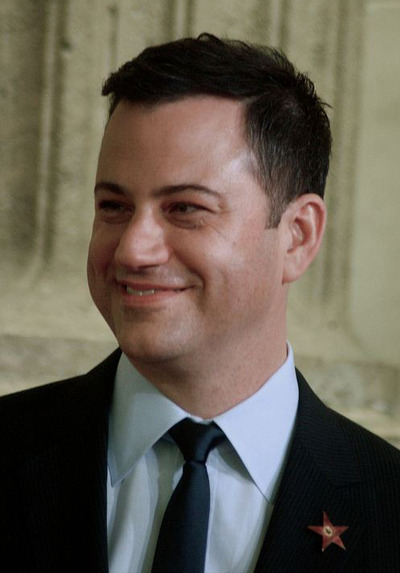 James Christian "Jimmy" Kimmel (born November 13, 1967) is an American comedian, actor, voice artist, writer, television producer, singer, rapper and television host. He is the host and creator of Jimmy Kimmel Live!, a late-night talk show that airs on ABC. Prior to that, Kimmel was best known as the co-host of Comedy Central's The Man Show and Win Ben Stein's Money. Kimmel is also a television producer, having produced shows such as Crank Yankers, Sports Show with Norm Macdonald, and The Andy Milonakis Show.

Kimmel was born in the Mill Basin neighborhood of the New York City borough of Brooklyn, the eldest of three children of Joan Kimmel (née Iacono), a homemaker, and James Kimmel, an IBM executive. He is Roman Catholic and, as a child, served as an altar boy. Kimmel's mother is of Italian ancestry; two of his paternal great-great-grandparents, Theresa and Christian Kimmel, were German immigrants. His uncle, Frank Potenza, appeared on Jimmy Kimmel Live! as a regular from 2003 until his death in 2011. A cousin, Sal Iacono, performed Kimmel's former co-hosting duties during the last season of Win Ben Stein's Money and is now a writer and sketch performer on Jimmy Kimmel Live!

The family moved to Las Vegas, Nevada, when he was nine years old. He graduated from Ed W. Clark High School and then attended the University of Nevada, Las Vegas for one year before attending Arizona State University for two years without completing a degree.

Kimmel began working in the radio industry while in high school, hosting a Sunday night interview show on UNLV's college station, KUNV. While attending Arizona State University, he became a popular caller to the KZZP-FM afternoon show hosted by radio personalities Mike Elliott and Kent Voss in Phoenix, Arizona. In 1989, Kimmel landed his first paying job alongside Voss as morning drive co-host of The Me and Him Show at KZOK-FM in Seattle, Washington.

Kimmel began his television career as the comedic counterpart to Ben Stein on the game show Win Ben Stein's Money, which began airing on Comedy Central in 1997. His quick wit and loutish everyman personality were counterpoints to Stein's monotone performing style and patrician demeanor. The combination earned the pair an Emmy award for Best Game Show Host. In 1999, during his time with Win Ben Stein's Money, Kimmel was also co-host with Adam Carolla and co-creator (with Daniel Kellison) of Comedy Central's The Man Show.

In January 2003, Kimmel permanently left The Man Show to host his own late-night talk show, Jimmy Kimmel Live!, on ABC. Jimmy Kimmel Live was briefly also broadcast on Irish digital TV channel 3e. In the April 2007 issue of Stuffmagazine.com, Kimmel was named the "biggest badass on TV". Kimmel said it was an honor but clearly a mistake.

Kimmel and his then-girlfriend, Gina, married in June 1988. They have two children, Katie (born 1991) and Kevin (born 1993). The marriage ended in separation in early 2002. Kimmel then dated comedian Sarah Silverman for seven years, splitting with her in March 2009. He started dating Molly McNearney, a co-head writer for Jimmy Kimmel Live, in October 2009. Kimmel and McNearney became engaged in August 2012, and married in July 2013.