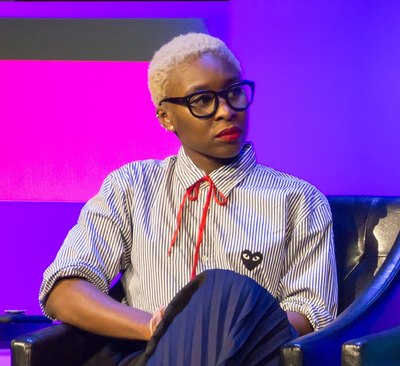 Erivo is known for her performance as Celie in the 2015 Broadway revival of The Color Purple, for which she won the 2016 Tony Award for Best Actress in a Musical as well as the 2017 Grammy Award for Best Musical Theater Album. She performed the role in the 2013 Menier Chocolate Factory production as well. Erivo is also known for her performance as Deloris Van Cartier/Sister Mary Clarence in the UK tour of Sister Act.

Erivo was born to Nigerian parents in Stockwell, South London. She attended La Retraite R.C Girls School. Erivo began a music psychology degree at the University of East London, however a year into her degree, she applied to, and subsequently trained at, the Royal Academy of Dramatic Art.

Erivo first appeared in roles on British television programmes such as Chewing Gum and The Tunnel. Her first stage role was in Marine Parade by Simon Stephens at the Brighton Festival. Her first musical role was in John Adams' and June Jordan's I Was Looking at the Ceiling and Then I Saw the Sky at Theatre Royal Stratford East.

In 2013, Erivo played the role of Celie Harris in the Menier Chocolate Factory production of The Color Purple. Erivo had previously portrayed Sister Mary Clarence/Deloris Van Cartier in the UK tour of the musical stage version of Sister Act which Goldberg also originated in its film adaptation.

Erivo originated the role of Chenice in the West End musical I Can't Sing! The X Factor Musical, which opened on 26 March 2014, at the London Palladium. The production closed on 10 May, just six weeks and three days since its official opening night.

She is also featured as a recording artist, co-writing and performing "Fly Before You Fall" on the soundtrack to the American musical drama Beyond the Lights.

She made her Broadway debut in the 2015 Broadway revival transfer of the Menier Chocolate Factory production of The Color Purple, reprising her role as Celie Harris alongside American actresses Jennifer Hudson as Shug Avery and Danielle Brooks as Sofia. The production began performances at Bernard B. Jacobs Theatre, from 10 December 2015. Among other awards for her performance, Erivo won the 2016 Tony Award for Best Actress in a Musical.

Erivo starred as Cathy alongside Joshua Henry in a one-night benefit concert performance of Jason Robert Brown's The Last Five Years on September 12, 2016. Proceeds from the performance went to the Brady Center, a national gun violence organization.

In February 2017, Erivo performed "God Only Knows" as a tribute to musicians who had died over the past year alongside John Legend at the 59th Annual Grammy Awards.

In November 2016, it was announced that Erivo would star in Steve McQueen's Widows, alongside André Holland and Viola Davis, a film she shot in the summer of 2017, with a release date set for November 16, 2018.

In 2018, Erivo starred as part of the seven-actor ensemble of Drew Goddard's Bad Times at the El Royale, as a "down-on-her-luck singer". Filming commenced in January 2018, with an October release, making the film her first to reach theatres.

Erivo has also been cast in Chaos Walking, based on Patrick Ness' trilogy novels. The film will be released in March 2019. In February 2017, it was reported that Erivo was attached to portray the title role in Harriet, a biographical film about American abolitionist Harriet Tubman. The film will begin production in October 2018. and is set for a Fall 2019 release.