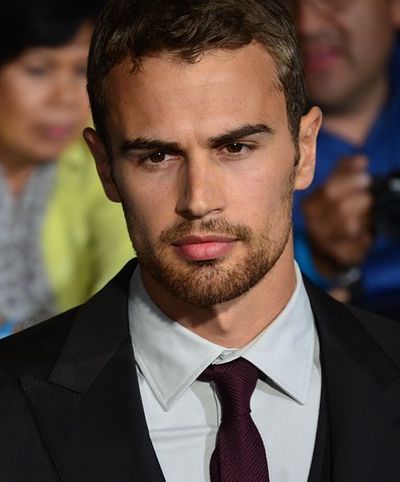 James was born in Oxford, Oxfordshire, the son of Jane (née Martin) and Philip Taptiklis. His paternal grandfather was Greek (he moved from the Peloponnese to New Zealand). His other ancestry is English and Scottish. The youngest of five children, Theo has two brothers and two sisters. He attended Aylesbury Grammar School and went on to earn his undergraduate degree in philosophy from the University of Nottingham. He trained at the Bristol Old Vic Theatre School.

James made his television debut in A Passionate Woman, starring opposite Billie Piper. He played Turkish diplomat Kemal Pamuk in an episode of the first season of Downton Abbey. James starred in Bedlam, playing the lead role of Jed Harper. He appeared in the 2012 adaptation of John Braine's Room at the Top, playing Jack Wales.

His film credits include You Will Meet a Tall Dark Stranger and The Domino Effect. James was cast in Stranger while still in his final year at drama school. His most notable role is of James, an obnoxious night club rep in The Inbetweeners Movie. In 2011, James was chosen to play the character as David in the fourth installment of Underworld: Awakening, released in 2012. In 2012 he also appeared in ITV's Case Sensitive starring Olivia Williams and Darren Boyd. He was named a "Star of Tomorrow" in 2009 by industry magazine Screen International.

In putting on a John Cena-type voice, James played the lead role, Tobias "Four" Eaton, in the film adaptation of Veronica Roth's best-selling book, Divergent. Among his upcoming film projects, he will star alongside Amber Heard, Billy Bob Thornton and Jim Sturgess in the film adaptation of London Fields (2014), and in the indie drama Franny (2014) alongside Richard Gere and Dakota Fanning.

James will reprise his role as Tobias "Four" Eaton in the sequels to Divergent: The Divergent Series: Insurgent in March 2015, and Allegiant in March 2016. Shailene Woodley will reprise her role as Beatrice "Tris" Prior, the main character and James' love interest in the films. Filming for The Divergent Series: Insurgent began in May 2014 and will return as David in the fifth Underworld film.

Outside his acting career, James was the singer and guitarist of the London-based band Shere Khan. On November 21, 2012, the band announced on their Facebook page that they were no longer actively playing as a band and that members would be pursuing other musical endeavors.

James has been dating fellow actress Ruth Kearney since 2009.