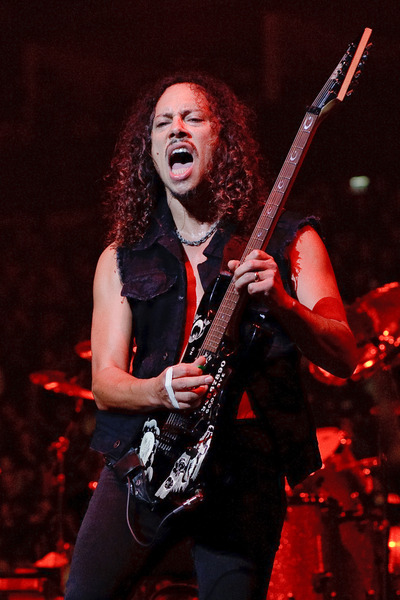 Kirk Lee Hammett (born November 18, 1962) is the lead guitarist and a songwriter in the heavy metal band Metallica and has been a member of the band since 1983. Before joining Metallica he formed and named the bandExodus. In 2003, Hammett was ranked 11th on Rolling Stone's list of The 100 Greatest Guitarists of All Time. In 2009, Hammett was ranked number 5 in Joel McIver's book The 100 Greatest Metal Guitarists.

Hammett was born on November 18, 1962 in San Francisco to a Filipina mother Teofila "Chefela" Oyao from Cebu and an Irish Merchant Marine father. He attended De Anza High School in Richmond, California. While attending De Anza High School he met Les Claypool of Primus and they remain close friends.

After purchasing a 1978 Fender Stratocaster copy, Hammett attempted to customize his sound with various guitar parts, eventually buying a 1974 Gibson Flying V. Hammett also took a job at Burger King as a youth before quitting once he saved enough money to purchase a Marshall amplifier.

In 1983 Hammett was invited to join Metallica following the dismissal of the band's original lead guitarist Dave Mustaine, who went on to form the band Megadeth. This was prior to the recording of Kill 'Em All. At the time Hammett was taking private lessons from guitar virtuoso Joe Satriani.

Hammett has written and contributed riffs for Metallica songs since the mid-1980s (particularly in the 1990s during the Load era). One of these riffs, used in "Enter Sandman" became one of Metallica's most popular songs. It was the first track and first single on Metallica's self-titled Black Album and was ranked 399th on Rolling Stone's list of The 500 Greatest Songs of All Time. The bridge for "Creeping Death" was originally an Exodus riff that Hammett took with him to Metallica.

Between the end of touring promoting the Black Album and the start of touring in promotion of Load, he studied at San Francisco State University, focusing on Film and Asian Arts.

Metallica and San Francisco Sy... 2019
Metallica Through the Never 2013