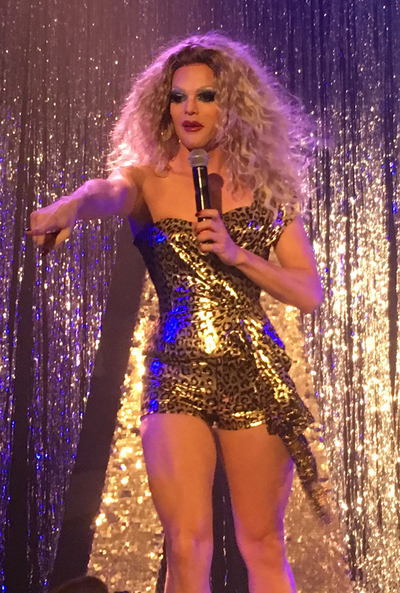 William Belli, monomonously known as Willam, is an American actor, drag queen, model, reality television personality, recording artist, and author, who is known for his recurring role as transgender woman Cherry Peck in Ryan Murphy's medical drama Nip/Tuck and for being a contestant on the fourth season of RuPaul's Drag Race, during which he became the only contestant ever disqualified from the series.

In addition to acting, Bellii found viral success with his music video parodies "Chow Down" and "Boy Is a Bottom" with his Los Angeles drag queen pop trio DWV. However, the group split in June 2014, because of a personal conflict among the groupmates.

Willam Belli was born in Philadelphia. He is the younger of two children. He lived in Florida for middle school and high school. Belli's father worked at the Kennedy Space Center. His aunt is television director Mary Lou Belli. Belli has Yugoslavian and Italian heritage. Willam was overweight when he was young but lost the extra pounds by becoming vegetarian before being emancipated at 16. Belli met his future husband, Bruce, at nineteen.

Belli's first acting credit was as the role of a street hustler named Bart Jaker on two episodes of The District (2002) and his first TV appearance was on an episode of the game show Street Smarts. He later appeared in the TV series The District, Boston Public, Cold Case, The Shield, My Name Is Earl and most notably Nip/Tuck as the transgender character Cherry Peck. Throughout the 2000s he would go on to play small roles in many television shows. He also had a small role in the film American Wedding.

In 2008, Belli was featured on the single artwork for the song "Breakin' Up" by Rilo Kiley. He has also modeled as part of the Tranimal Master Class Workshop at the Machine Project, which was photographed by Austin Young.

Belli is a member of the band Tranzkuntinental, which made its debut at The Roxy in 2009. The band was started by Charlie Paulson and Xander Smith and features drag queens Detox, Kelly Mantle, Rhea Litré, and Vicky Vox.

In January 2011, he was featured in Rihanna's music video "S&M" along with Detox and Morgan McMichaels as back-up dancers.

World of Wonder contacted Willam's management asking for him to audition for the fourth season of RuPaul's Drag Race. In November 2011, Logo TV announced that Belli was among 13 contestants competing on the fourth season. Fellow castmate Chad Michaels had competed with Belli in the California Entertainer of the Year Pageant in 2010. Belli won the main challenges in the episodes "Float Your Bloat" and "Frenemies," but was disqualified in the latter. In the episode "Reunited," Belli stated that his disqualification was due to conjugal visits made by his husband in his hotel room, though by Belli's own account, the "disqualification" coincided with a previously booked off-Broadway engagement. Belli used the publicity of his disqualification to release his single "Chow Down," which was a parody of Wilson Phillips' "Hold On" that addressed the 2012 Chick-fil-A same-sex marriage controversy. The song featured Detox and Vicky Vox.

Belli released "Love You Like a Big Schlong" on April 29, 2012. This was much better received becoming something of a viral hit being watched more than a million times on YouTube alone. Produced by Uncle Slam, the song parodies "Love You Like a Love Song" by Selena Gomez & the Scene. The song was inspired by Belli's loss to 7-year-old Eden Wood in a lip syncing contest during a segment of the 2012 NewNowNext Awards.

In November 2012, Belli was featured with country music artist Drake Jensen on a cover of Tammy Wynette's "Stand by Your Man." That same month, Belli self-released his debut album The Wreckoning via his website.

Beginning in December 2012, Belli began a YouTube series associated with thestylishvids titled, "Willam's Beatdown". A comedy segment involving insult humor and video reviews, the series would eventually be renewed for a second, third, fourth, and fifth season that then premiered on Belli's self-titled channel. In January 2013, Belli would have his biggest viral hit with 20 million hits on YouTube alone, when he released "Boy Is a Bottom," featuring Detox and Vicky Vox, to coincide with the fifth season premiere of RuPaul's Drag Race. Its timing and the use of social media made it a very well received release. The song is a parody of "Girl on Fire" by Alicia Keys and also features an altered version of the "breakdown" from "My Lovin' (You're Never Gonna Get It)" by En Vogue. "Boy Is a Bottom" debuted at number six on Billboard's Comedy Digital Songs, selling 3,000 downloads in its first week.

Belli's trio, including Detox and Vicky Vox, called DWV, officially split in June 2014 due to a personal conflict between the members.

On January 13, he released a solo version of the DWV hit "Boy Is a Bottom", in Spanish, entitled, "Es Una Pasiva", which went on to top the comedy iTunes chart. Belli self-released his sophomore studio album, Shartistry in Motion, on June 2.

On May 18, 2017, it was revealed that Fullscreen had ordered a talk show to be hosted by Belli. Suck Less, billed as a weekly half-hour call-in show 'where Willam throws shade and shows how to slay the game of life in six-inch stilettos' is set to debut in the summer. Friends from Belli's everyday life, as well as some of his favorite drag queens are expected to put in guest appearances over the course of the 13-episode series.