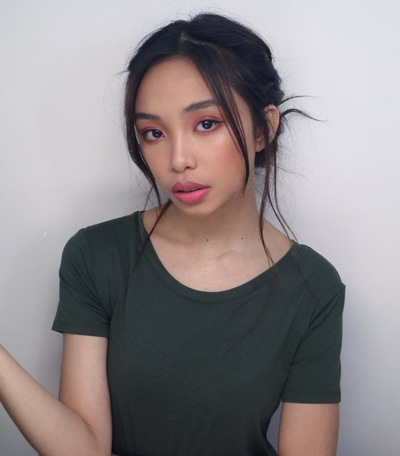 Mary Dale Entrata (born May 6, 1997), better known as Maymay Entrata, is a Filipina actress, singer, and model, notable for winning the reality TV show Pinoy Big Brother: Lucky 7 and for being the first Filipina personality to walk in the Arab Fashion Week.

Entrata was born in the province of Camiguin and raised in Cagayan De Oro City, Philippines. She grew up with her grandparents as her father left them when she was just a year old and her mother went to Japan as an OFW.

Starting at the age of 14, Entrata began auditioning for various reality TV shows to fulfill her ambition of becoming an actress. Through the years, she was rebuffed from Pinoy Big Brother: Teen Clash 2010, Pinoy Big Brother: 737, The Voice and Pilipinas Got Talent.

In 2016, she auditioned for Pinoy Big Brother Lucky Season 7 and was chosen for the Teen Edition. Maymay was the Lucky Teen Housemate chosen by the Celebrity housemates after accomplishing 6 out of 7 lucky tasks to become a fully pledged housemate for the Teen Edition. She entered the house a day after the two Celebrity Housemates, Jinri Park and Nikko Natividad & McCoy DeLeon were announced as the two Lucky Stars finalists.

On Week 19, Maymay was left for another week with Yong Muhajil on the nominations' list for the third Lucky Sun slot. After a week, Maymay won with 57.57% of votes while Yong got 45.43% of votes, making her third teen housemate to be have a spot for the eventual Dream Team Chapter. Throughout the Dream Team, she maintained her "safe" status and avoided the nominations block all throughout until the Big Night. On Day 228 of Week 34, she was proclaimed as among the Lucky 7 Dream Team Finalists to continue on the Finale.

On the evening of March 5, 2017, Entrata ended up in the final two with Kisses where she received 42.71% of votes over Kisses who got 31.27% of public votes, making her the winner of the longest season in the history of Pinoy Big Brother, beating 30 housemates in total.

On June 2017, she became one of the official cast members of the popular television series La Luna Sangre, with a supporting role as "Apple Toralba". Her self-titled musical album was also released in June which earned her a Gold Record Award on the first day of its release.

On August 2017, at the MOR Pinoy Music Awards 2017 awards she received the Best Collaboration trophy for the song “Baliw” which she recorded and performed with Edward Barber.

On September 2017, Entrata and Barber, popularly known as "MayWard", played the lead roles for their first film Loving In Tandem that was released on September 13, 2017 nationwide. Later that year, her album achieved platinum status.

On October 2017, she won the Best Novelty Song Artist of the Year award from Eduk Circle. A week later, MayWard won the Push Group/Tandem at the PUSH AWARDS, an annual digital media event of ABS-CBN held at the ASAP Chillout. Their fans, the MayWards or MayWard Flyers, also captured the Ultimate Fan Award for posting the highest number of tweets among all fan clubs during the seven-week voting period.

MayWard have had concerts in Singapore, Taiwan and Hongkong and were also part of Star Magic Grand Celebration in Singapore together with KathNiel, Piolo Pascual, Maja Salvador and many others.

On February 23, 2018, after her debut album under Star Music, Maymay had her first major solo concert which was sold out within 50 minutes prior to release of tickets at the Kia Theater, entitled "The Dream Maymay In Concert" featuring Edward Barber and her other guests such as Enchong Dee and 4th Impact. Her concert led to a tour titled "The Dream Tour" beginning on April 13, 2018 in Imus Sports Complex, Cavite.

On March 23, 2018, she had back-to-back concert appearances. MayWard performed first in 4th Impact Rise Up Concert at Sky Dome and straight away went to Kia Theatre for Maymay's special performance with Maja Salvador at MAJA on Stage Concert.