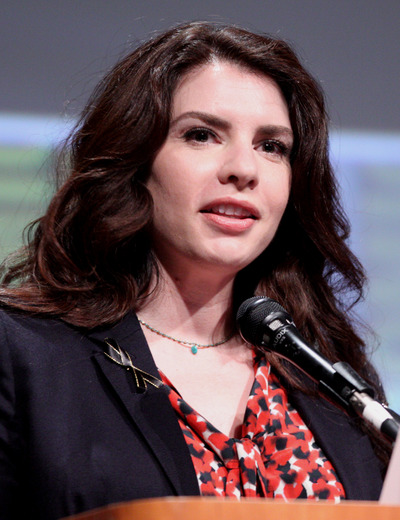 Stephenie Meyer (née Morgan; born December 24, 1973) is an American young adult author and producer, best known for her vampire romance series Twilight. The Twilight novels have gained worldwide recognition and sold over 100 million copies, with translations into 37 different languages. Meyer was the bestselling author of 2008 and 2009 in America, having sold over 29 million books in 2008, and 26.5 million books in 2009. Twilight was the best-selling book of 2008 in US bookstores.

Stephenie Meyer was born in Hartford, Connecticut, to Stephen and Candy Morgan. She grew up in Phoenix, Arizona, with five siblings: Seth, Emily, Jacob, Paul, and Heidi. She attended Chaparral High School in Scottsdale, Arizona, where her former English teacher remembered her as "bright but not overly so." She attended Brigham Young University in Provo, Utah where she received a B.A. in English in 1997. Meyer met her husband Christian when she was 4 years old in Arizona, and married him in 1994 when they were both 21. Together they have three sons: Gabe, Seth, and Eli. Christian Meyer, formerly an auditor, has now retired to take care of the children.

Meyer is a member of the Church of Jesus Christ of Latter-day Saints; she has stated that she is straight-laced about her beliefs and does not drink alcohol or smoke. Meyer had no experience as a writer of any kind and had never even written a short story before Twilight. She had considered going to law school because she felt she had no chance of becoming a writer; she later noted that the birth of her oldest son Gabe changed her mind, saying, "Once I had Gabe, I just wanted to be his mom." Before becoming an author, Meyer's only professional work was as a receptionist in a property company.

Meyer says that the idea for Twilight came to her in a dream on June 2, 2003. The dream was about a human girl and a vampire who was in love with her but thirsted for her blood. Based on this dream, Meyer wrote the draft of what became Chapter 13 of the book. In a matter of three months she had transformed her dream into a complete novel, though she claims that she never intended to publish Twilight and was writing for her own enjoyment. Her sister's response to the book was enthusiastic and she persuaded Meyer to send the manuscript to literary agencies.

Of the 15 letters she wrote, five went unanswered, nine brought rejections, and the last was a positive response from Jodi Reamer of Writers House. Eight publishers competed for the rights to publish Twilight in a 2003 auction. By November, Meyer had signed a $750,000 three-book deal with Little, Brown and Company. Twilight was published in 2005 with a print run of 75,000 copies. It reached #5 on the New York Times Best Seller list for Children's Chapter Books within a month of its release, and later rose to #1. Foreign rights to the novel were sold to over 26 countries. The novel was named the Publishers Weekly Best Book of the Year and a New York Times Editor's Choice.

Meyer married Christian Meyer in 1994. They have three sons together: Gabe, Seth and Eli. The family lives in Cave Creek, Arizona, and also own a home on Marrowstone Island, Washington.