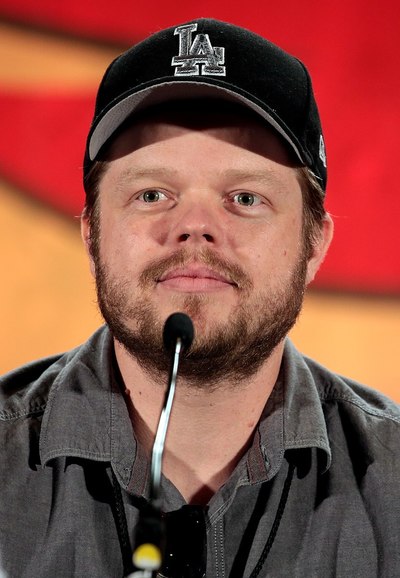 Elden Henson (born Elden Ryan Ratliff; August 30, 1977) is an American actor. He is best known for playing Fulton Reed in The Mighty Ducks trilogy, Foggy Nelson in Daredevil, and Pollux in The Hunger Games: Mockingjay - Part 1 and Part 2.

Elden Ryan Ratliff was born August 30, 1977 in Rockville, Maryland, to a professional photographer mother. His siblings are actors Garette Ratliff Henson (who appeared in The Mighty Ducks with Elden) and Erick Ratliff (who, like Elden, appeared in Elvis & Me). Henson also has a younger half-brother, Ellington Ratliff, who is a member of the band R5. Elden's father George Ratliff was an actor and his mother took her young boys for commercial auditions. They lived for a number of years in Weehawken, New Jersey, where he attended Gary Golombek High School until its closure.

From 1992 to 1996, Henson played Fulton Reed in all three films in The Mighty Ducks trilogy: The Mighty Ducks (1992), D2: The Mighty Ducks (1994) and D3: The Mighty Ducks (1996). He told TV Guide that he owes "a lot of [his] career" to those films. "What's funny is I still, more than anything, get recognized for The Mighty Ducks. I love it. When I was younger, I would get embarrassed. I played sports growing up and I'd be playing baseball and the other team would be quacking at me and stuff. I love those movies. I feel like these things come once in a lifetime and to experience this stuff as a kid and as an adult, I just feel really lucky."

In April 2015, Henson was cast as Foggy Nelson in the Netflix Web TV series Daredevil. Henson spoke of his excitement for the character's role in the series, saying "I was really excited as I was getting the scripts and reading that Foggy wasn't just a useless sidekick. He's not just comic relief. I mean, he is some of those things. He does have comic relief, but it was exciting to know that these other characters would have their own path and their own things that they're dealing with."

Henson is set to reprise the role of Foggy in the crossover miniseries The Defenders.