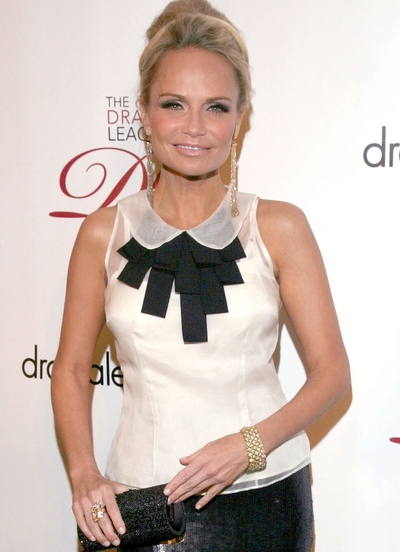 Kristin Dawn Chenoweth (born July 24, 1968) is an American singer and actress, with credits in musical theatre, film and television. In 1999, she won a Tony Award for her performance as Sally Brown in You're a Good Man, Charlie Brown on Broadway, and in 2003, she received wide notice for originating the role of Glinda in the musical Wicked. Her television roles have included Annabeth Schottin NBC's The West Wing and Olive Snook on the ABC comedy-drama Pushing Daisies, for which she won a 2009 Emmy Award. Chenoweth also starred in the ABC TV series GCB in 2012.

Chenoweth sang gospel music as a child in Oklahoma and studied opera before deciding to pursue a career in musical theatre. In 1997, she made her Broadway debut in Steel Pier. Besides You're a Good Man, Charlie Brown and Wicked, Chenoweth's stage work includes five City Center Encores! productions, Broadway's The Apple Tree in 2006 and Promises, Promises in 2010, as well as Off-Broadway and regional theatre productions.

Chenoweth had her own TV series Kristin in 2001, and has guest starred on many shows, including Sesame Street and Glee, for which she was nominated for Emmy awards in 2010 and 2011. In films, she has played mostly character roles, such as in Bewitched (2005), The Pink Panther (2006) and RV (2006). She has played roles in made-for-TV movies, done voice work in animated films and the animated TV series Sit Down, Shut Up, hosted several award shows and released several albums of songs, including A Lovely Way to Spend Christmas (2008) and Some Lessons Learned (2011). Chenoweth also penned a 2009 memoir, A Little Bit Wicked: Life, Love, and Faith in Stages.

Chenoweth was adopted when she was five days old by Junie Smith Chenoweth and Jerry Morris Chenoweth of Broken Arrow, Oklahoma, a suburb of Tulsa, and named Kristi Dawn Chenoweth. She has stated that she is of one quarter Cherokee ancestry. At an early age, she performed gospel songs for local churches. A performing highlight of her childhood was a solo appearance at the Southern Baptist Convention national conference at the age of 12, where she performed the Evie song "Four Feet Eleven". The chorus begins, "I'm only 4 feet 11, but I'm going to Heaven" (Chenoweth is 4 ft 11 in (150 cm) in height). After graduating from Broken Arrow Senior High, where she participated in school plays, Chenoweth attended Oklahoma City University, where she was a member of Gamma Phi Beta (Beta Omicron) sorority. She earned a BFA degree in musical theatre and a master's degree in opera performance, studying under voice instructor and mentor, Florence Birdwell. While at OCU, Chenoweth competed in beauty pageants, winning the title of "Miss OCU" and was the second runner-up in the Miss Oklahoma pageant in 1991. In 1992, Chenoweth participated in a studio recording of The Most Happy Fella.

While she was in college and working towards her masters, Chenoweth performed at the Lyric Theatre in Oklahoma City, among other regional theatres, in roles like June in Gypsy, Liesl in The Sound of Music, Fran in Promises, Promises and Tuptim in The King and I. As she completed her Masters degree, Chenoweth participated in a number of vocal competitions and was named "most promising up-and-coming singer" in the Metropolitan Opera National Council auditions, which came with a full scholarship to Philadelphia's Academy of Vocal Arts. Two weeks before school started, however, she went to New York City to help a friend move. While there, she auditioned for the 1993 Paper Mill Playhouse production of the musical Animal Crackers and got the role of Arabella Rittenhouse. She turned down the scholarship and moved to New York to do the show and pursue a career in musical theatre.

After Animal Crackers, Chenoweth continued to appear in regional theatre productions, such as Babes in Arms at The Guthrie Theater in Minneapolis, and Phantom (as Christine; also touring in Germany in this role), also taking roles in Off-Broadway productions like Luisa in The Fantasticks, and Kristy in Box Office of the Damned (both in 1994). In 1997, she appeared as Hyacinth in the Roundabout Theater Company production of Moliere's farcical Scapin, earning her first New York Times review, with Ben Brantley writing "Kristin Chenoweth's sob-prone ingenue ... [is] delightful". She made her Broadway debut in the spring of 1997 as Precious McGuire in the musical Steel Pier by Kander and Ebb, for which she won a Theatre World award. In 1998 she appeared in the City Center Encores! staged concert of the George andIra Gershwin musical Strike up the Band as Anne Draper and the Lincoln Center Theater production of William Finn's A New Brain. Ben Rimalower, in Playbill, wrote: "It's unlikely anyone will equal Kristin Chenoweth in the role of 'Nancy D., the waitress.'"

After a guest appearance on LateLine, a role in the short-lived television series Paramour (1999) and several roles in television films such as Annie (as Lily St. Regis), Chenoweth starred in her own NBC sitcom, the semi-autobiographical Kristin in 2001. It was short-lived, with thirteen episodes filmed, but only six aired before it was cancelled. Chenoweth appeared in the lead role of Marian in the 2003 television film, The Music Man, opposite Matthew Broderick. She also guest-starred on such shows as Frasier (2001), Sesame Street (2004) and Ugly Betty (2007).

In 2004, Chenoweth began playing the recurring role of media consultant Annabeth Schott in The West Wing. For her performance, she was nominated twice, along with the cast, for a Screen Actors Guild Award. She appeared in the final two seasons of the program, through 2006. Chenoweth had been considered originally for the role of Ainsley Hayes, but she had already accepted her role in Wicked.

Chenoweth made her film debut in Topa Topa Bluffs in 2002 playing "Patty". After a few years away from film she returned to the big screen in the 2005 film version of Bewitched, directed by Nora Ephron, as Maria Kelly. In 2006, Chenoweth played supporting roles in five films,The Pink Panther, RV, Running with Scissors, Deck the Halls, and Stranger Than Fiction.

On February 24, 2008, Chenoweth sang "That's How You Know" from the film Enchanted at the 80th Academy Awards in the Kodak Theater. She also voiced Rosetta, the garden fairy in the 2008 animated film Tinker Bell. Later that year, Chenoweth appeared in the 2008 holiday romantic comedy film Four Christmases, playing the sister of Reese Witherspoon's character.

In 2009, Chenoweth wrote a memoir entitled A Little Bit Wicked: Life, Love, and Faith in Stages, describing her life and career, including her adoption, her turn in Wicked and her time in Hollywood. The book was released on April 14, 2009. It spent two weeks on The New York Times Best Seller list.

Chenoweth dated Jake Pavelka, ABC's Bachelor from Season 14, as well as producer/writer Aaron Sorkin. In Sorkin's Studio 60 on the Sunset Strip, the character of Harriet Hayes bears significant resemblances to Chenoweth, and the relationship between the Christian Hayes and "East coast liberal Jewish atheist" (Hayes' description) Matt Albie is modeled after that of Chenoweth and Sorkin. For example, Chenoweth's decision to appear on The 700 Club and her falling out with Women of Faith were depicted with the Hayes character.