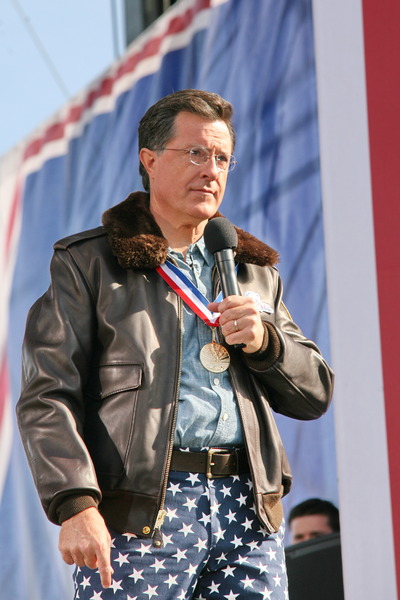 Stephen Tyrone Colbert (born May 13, 1964) is an American political satirist, writer, comedian, television host, and actor. He is the host of Comedy Central's The Colbert Report, a satirical news show in which Colbert portrays a caricatured version of conservative political pundits.

Colbert originally studied to be an actor, but became interested in improvisational theatre when he met famed Second City director Del Close while attending Northwestern University. He first performed professionally as an understudy for Steve Carell at Second City Chicago; among his troupe mates were comedians Paul Dinello and Amy Sedaris, with whom he developed the sketch comedy series Exit 57.

Colbert also wrote and performed on the short-lived Dana Carvey Show before collaborating with Sedaris and Dinello again on the cult television series Strangers with Candy. He gained considerable attention for his role on the latter as closeted gay history teacher Chuck Noblet. His work as a correspondent on Comedy Central's news-parody series The Daily Show first introduced him to a wide audience.

In 2005, he left The Daily Show with Jon Stewart to host a spin-off series, The Colbert Report. Following The Daily Show's news-parody concept, The Colbert Report is a parody of personality-driven political opinion shows such as The O'Reilly Factor. Since its debut, the series has established itself as one of Comedy Central's highest-rated series, earning Colbert three Emmy Award nominations and an invitation to perform as featured entertainer at the White House Correspondents' Association Dinner in 2006. Colbert was named one of Time's 100 most influential people in 2006 and 2012. His book I Am America (And So Can You!) was No. 1 on The New York Times Best Seller list.

Colbert was born in Washington, D.C., and grew up in Charleston, South Carolina, on James Island, the youngest of 11 children in a Catholic family. Colbert and his siblings, in order from oldest to youngest, are James ("Jimmy"), Edward ("Eddie"), Mary, William ("Billy"), Margo, Thomas ("Tommy"), Jay, Elizabeth ("Lulu"), Paul, Peter, and Stephen.

Many of his ancestors emigrated from Ireland to North America in the 19th century before and during the Great Famine.

His father, James William Colbert, Jr., was a doctor and medical school dean at Yale University, Washington University, and finally at the Medical University of South Carolina where he served as vice president for academic affairs. Stephen's mother, Lorna Colbert (née Tuck), was a homemaker. In interviews, Colbert describes his parents as devout people who also strongly value intellectualism and taught their children that it was possible to question the Church and still be Catholic. The emphasis his family placed on intelligence and his observation of negative stereotypes of Southerners led Colbert to train himself to suppress his Southern accent while he was still quite young. As a child, he observed that Southerners were often depicted as being less intelligent than other characters on scripted television; to avoid that stereotype, he taught himself to imitate the speech of American news anchors.

On September 11, 1974, when Colbert was ten years old, his father and two of his brothers, Peter and Paul, were killed in the crash of Eastern Air Lines Flight 212 while it was attempting to land in Charlotte, North Carolina. They were en route to enroll the two boys at Canterbury School in New Milford, Connecticut. Lorna Colbert relocated the family downtown to the more urban environment of East Bay Street in Charleston.

Colbert attended Charleston's Episcopal Porter-Gaud School, where he participated in several school plays and contributed to the school newspaper but, by his own account, was not highly motivated academically. During his adolescence, he briefly fronted a Rolling Stones cover band called A Shot in the Dark. When he was younger, he had hoped to study marine biology, but surgery intended to repair a severely perforated eardrum caused him inner ear damage. The damage was severe enough that he was unable to pursue a career that would involve scuba diving. The damage also left him deaf in his right ear. For a while, he was uncertain whether he would attend college, but ultimately he applied and was accepted to Hampden-Sydney College in Virginia, where a friend had also enrolled. There he continued to participate in plays while studying mainly philosophy. He found the curriculum rigorous, but was more focused than he had been in high school and was able to apply himself to his studies. Despite the lack of a significant theater community at Hampden-Sydney, Colbert's interest in acting escalated during this time. After two years, he transferred to Northwestern University as a Theater Major to study performance, emboldened by the realization that he loved performing, even when no one was coming to shows.

While at Northwestern, Colbert studied with the intent of becoming a dramatic actor; mostly he performed in experimental plays and was uninterested in comedy.. After Colbert graduated in 1986, however, he was in need of a job. A friend who was employed at Second City's box office offered him work answering phones and selling souvenirs. Colbert accepted and discovered that Second City employees were entitled to take classes at their training center for free. Despite his earlier aversion to the comedy group, he signed up for improvisation classes and enjoyed the experience greatly.

Shortly thereafter, he was hired to perform with Second City's touring company, initially as an understudy for Steve Carell. It was there he met Amy Sedaris and Paul Dinello, with whom he often collaborated later in his career. By their retelling, the three comedians did not get along at first—Dinello thought Colbert was uptight, pretentious and cold, while Colbert thought of Dinello as "an illiterate thug"—but the trio became close friends while touring together, discovering that they shared a similar comic sensibility.

Colbert lives in Montclair, New Jersey, with his wife, Evelyn McGee-Colbert, who appeared with him in an episode of Strangers with Candy as his mother. She also had an uncredited cameo as a nurse in the series pilot and a credited one (as his wife, Clair) in the film. McGee-Colbert actually met Jon Stewart, later a good friend of Colbert, before she met her husband in 1990. She is the daughter of prominent Charleston civil litigator Joseph McGee, of the firm Buist Moore Smythe McGee. The couple has three children: Madeleine, Peter, and John. Colbert prefers, however, that his children not watch his show The Colbert Report, saying that "kids can't understand irony or sarcasm, and I don't want them to perceive me as insincere."