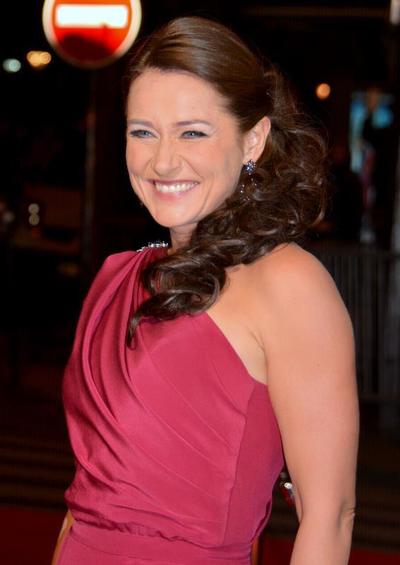 Sidse Babett Knudsen (born 22 November 1968) is a Danish actress who works in theatre, television, and film. Knudsen made her screen debut in the 1997 improvisational comedy Let's Get Lost, for which she received both the Robert and Bodil awards for Best Actress.

Following the critical success of her debut, Knudsen has been considered one of the top Danish actresses of her generation. In 2000, she again won both best actress awards for the comedy romance Den Eneste Ene (English title: The One and Only). In 2016, she won the César Award for Best Supporting Actress for the film Courted (L'Hermine). Knudsen has also received award nominations for her roles in Monas Verden (Mona's World), Efter brylluppet and (After the Wedding).

Knudsen was born 22 November 1968 in Copenhagen, the daughter of Ebbe Knudsen, a photographer, and Susanne Andersen, a school teacher. From 1987 to 1990, she trained in acting at the Theatre de l'Ombre in Paris despite knowing little French. Upon returning to Denmark, Knudsen played roles for the experimental theatre OVINE 302 as well as at the Betty Nansen and Royal Danish Theatres in Copenhagen. She is unmarried and has a son, born in 2005.

In 1997 Knudsen debuted in the lead role of Julie in Jonas Elmer's slice-of-life comedy Let's Get Lost. The film's script was only an outline, requiring the actors to improvise their roles and dialogue. Knudsen said she wasn't very good at improvisation and accepted the part only because she thought it would be a lightweight summer comedy. The film became a breakout hit in Denmark and Knudsen received both the Robert Award and the Bodil Award for Best Actress. Critics called Knudsen's performance dominating. Film critic Kim Skotte of Politiken wrote that Knudsen had hit a new tone with a "special ability to capture the modern woman's uncertainty and strength."

Following her appearance in the 1999 television mystery Motello, Knudsen played the lead character in Susanne Bier's 1999 romantic comedy Den Eneste Ene. The film became one of the decade's biggest box-office hits in Denmark. It marked a new direction in modern Danish romantic comedies with credit given to Knudsen's acting style. Knudsen's portrayal of Sus, a woman who becomes pregnant by her unfaithful husband while she loves another man, again earned her both the Robert Award and the Bodil Award for Best Actress.

Knudsen returned to work with Elmer in 2000 as the title character in the comedy Mona's Verden. As in Elmer's first film, Knudsen was required to improvise her dialogue and character. Knudsen's portrayal of Mona, an uptight accountant who tries to stave off the romantic infatuation of a bank robber while being held hostage, earned her a Bodil Award nomination for Best Actress.